Tales from the DMZ: A Soldier's Life on the Fenceline | Asia Society Skip to main content

Tales from the DMZ: A Soldier's Life on the Fenceline 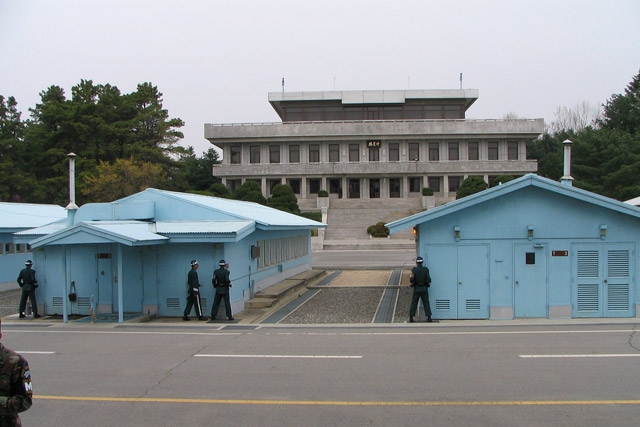 In-Bum Chun is a graduate of the Korea Military Academy (KMA) in 1977. He was selected as the aide to Lieutenant General Lee, Ki-Baek. In 1983 General Lee, as Chairman of the ROK Joint Chiefs of Staff, was a victim of the Rangoon bombing. Lieutenant General (Ret.) Chun was credited with saving General Lee’s life and was awarded the National Security Medal (Kwang-Bok).

Upon completion of Regimental Command, Lieutenant General (Ret.) Chun was assigned as the Chief of the Election Support Branch, Civil-Military Affairs/Strategic Operations Directorate at the Multi-National Force (MNF) in Iraq. He was recognized by both the Republic of Korea and the United States for his contribution to the first “Fair and Free” elections in Iraq on January 30, 2005, with the Hwa-Rang Combat Medal and the U.S. Bronze Star Medal.

From November of 2005, Lieutenant General (Ret.) Chun served as the Director of U.S. Affairs at the Korean Ministry of National Defense and was involved in negotiations and cooperation with the U.S. on the relocation of U.S. forces, camp returns, ROK/U.S. Joint Vision Study, Special Measures Agreement, and the transition of the Wartime Operational Control.

On July 19, 2007, twenty-three Korean missionary workers were kidnapped by the Taliban. Lieutenant General (Ret.) Chun was credited with the successful rescue mission and was awarded the Korean Presidential Citation. Upon completion of his duties as the Deputy Director for Strategic Planning at ROK JCS, Lieutenant General (Ret.) Chun took over the OPCON Transition Group.

LTG(R) Chun commanded the 27th Infantry Division and was the Senior Member of the UN Command Military Armistice Commission. In November of 2013, he was promoted to Lieutenant General and was assigned as the Commander of the ROK Special Warfare Command. Lieutenant General (Ret.) Chun retired from active duty as of July 31, 2016.

Upon his retirement, he conducted concurrent fellowships with the Brookings Institute and the U.S.-Korea Institute (USKI) at the Johns Hopkins School of Advanced International Studies (SAIS) until October 2017. He was also a Distinguished Visiting Fellow at the Sam-Nunn School of Advanced Studies at Georgia Tech.

Watch his recent appearance at our webinar on North Korean asymmetric capabilities here.

Mason Richey (Moderator) is a senior contributing writer to Asia Society Korea and an associate professor of international politics at Hankuk University of Foreign Studies (Seoul, South Korea). Dr. Richey has also held positions as a POSCO Visiting Research Fellow at the East-West Center (Honolulu, HI) and a DAAD Scholar at the University of Potsdam.

His research focuses on U.S. and European foreign and security policy as applied to the Asia-Pacific. Recent scholarly articles have appeared (inter alia) in Pacific Review, Asian Security, Global Governance, and Foreign Policy Analysis. Shorter analyses and opinion pieces have been published in War on the Rocks, Le Monde, the Sueddeutsche Zeitung, and Forbes, among other venues.

Stephen M. Tharp is a retired U.S. Army officer and Department of the Army civilian with 40 years of government service who has lived for 32 years in Korea; 14 years while on active duty. He is currently writing a series of books about the Korean DMZ and leads groups to the Korean DMZ.

Lieutenant Colonel (Ret) Tharp’s Korea assignments during his 28 years on active duty include Chief of the Policy Planning and Operations, Directorate of Plans and Policy (C5) at the ROK-US CFC (2002-2004); Assistant Secretary (1998-2002) and Language Division Chief (1994-1996), UNC Military Armistice Commission where he met extensively with North Korean and Chinese military officers at the Joint Security Area-Panmunjom; Platoon Leader/Company Executive Officer of Company C, 1st Battalion 23rd Infantry Regiment (1982-1984) where he spent 20 weeks on the DMZ leading reconnaissance and ambush patrols.

Lieutenant Colonel (Ret) Tharp’s civilian education includes an M.A. in Asian Studies, University of Hawaii (1992); a certificate in Teaching Foreign Languages (Chinese), Monterey Institute of International Studies (1998); and a B.S. in Business Management, University of Maryland (1987). He also served as an adjunct professor at Yonsei’s Underwood International College teaching Asian Studies and Korean War courses (2004-2007). He is married with no children.