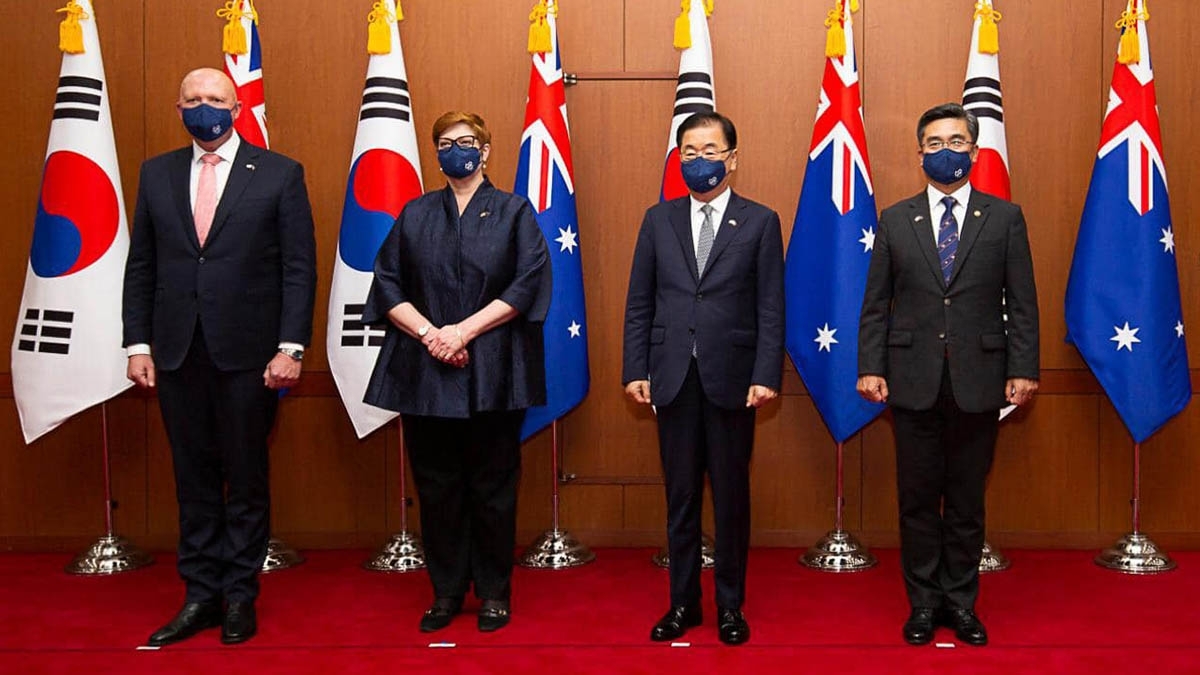 November 24, 2021 — As middle powers, what role can South Korea and Australia play in promoting an open, inclusive, and prosperous Indo-Pacific region? How can the two counties continue to develop strong cooperative relations in the future?

2021 marks the 60th anniversary of the establishment of diplomatic ties between Australia and the Republic of Korea. Although separated by vast waters, these two countries have played a robust role in shaping the economic and security landscape of the Indo-Pacific. As middle powers, they have relied on their strong alliances with the U.S to ensure regional security. However, the rise of an assertive China, as well as a recalibration toward domestic issues in the U.S, has forced them to navigate uncharted waters.

Earlier this year, the bilateral relationship between South Korea and Australia was elevated to a Comprehensive Strategic Partnership. Yet, as the Asia-Pacific enters a dangerous period of rivalry and tension, this strategic relationship may face some unique constraints and challenges.

Join Wongi Choe, Professor at Korea National Diplomatic Academy (KNDA) and Asia Society Australia-Korea Fellow, Jeffrey Robertson, Visiting Fellow at ANU College of Asia & the Pacific and Associate Professor at Yonsei University, and Hayley Channer, Senior Policy Fellow at Perth USAsia Centre, in conversation with Yvonne Kim, Executive Director of Asia Society Korea, on the strategic challenges and opportunities of middle powers in the region and the critical roles which Australia and Korea play in the Indo-Pacific.

The Australia and Korea: Middle Power Parallels project is supported by the Commonwealth through the Australia-Korea Foundation, which is part of the Department of Foreign Affairs and Trade. This event is in partnership with Asia Society Australia.

Wongi Choe, is a professor at the Korea National Diplomatic Academy (KNDA), where he has been doing policy research on various topics in Asian regional politics, climate change and global governance, etc. As an advisory member of the Ministry of Foreign Affairs in the ROK delegation, he participated in the UN Climate Change Negotiations from 2009 to 2019.

Currently, he serves as the head of the Center for ASEAN–India Studies at the KNDA. In that capacity, he leads KNDA's policy research on Korea's diplomatic approach to Southeast Asia, South Asia and beyond. He also serves as a member of advisory group at the Presidential Committee on New Southern Policy in Korea.

Based in Canberra, Hayley produces analysis on Australia's foreign and defence policy in the Indo-Pacific and engages with key government agencies and other policy stakeholders. Hayley has led a diverse career across government, think tanks and the not-for-profit sector. She previously worked for the Department of Defence producing policy advice on Australia’s defence cooperation with the United States and Japan.

She has also been an adviser to former Minister for Defence, Senator Marise Payne, analyst with the Australian Strategic Policy Institute (ASPI), and coordinated government relations for Australia’s largest non-profit organisation, World Vision.

Dr. Robertson is an associate professor at Yonsei University and a visiting fellow at the Asia-Pacific College of Diplomacy (APCD) at the Australian National University (ANU). Before moving to academia, he worked for the Australian government in the field of foreign policy and North Asia, focusing on China, the Korean Peninsula, and Japan. This included a period as senior research specialist for the Australian Parliament, where he provided advice to Members of Parliament, Senators, and Parliamentary Committees on foreign policy, political, and strategic affairs relating to North Asia.

Dr. Robertson's research interests include diplomatic practice, foreign policy, and Korean peninsula affairs. Examples of recent research include the text Diplomatic Style and Foreign Policy: A Case Study of South Korea (Routledge, 2016), which explores the analytical insight gained through the recognition and comprehension of diplomatic style; the article "Organizational culture and public diplomacy in the digital sphere" (Asia & the Pacific Policy Studies, 5(3) 2018), which looks at the challenges of implementing digital strategies in foreign ministries; and the article "Is Pyongyang different in Washington and Seoul? English and Korean language discourse on North Korea" (KEIA Academic Paper Series, April 2019), which analyzes different conceptualizations of North Korea in the U.S. and South Korea.