[ASK-Y] Session 6: Why Can't We Get Along? | Asia Society Skip to main content

The New Disruptors: Politics and Security 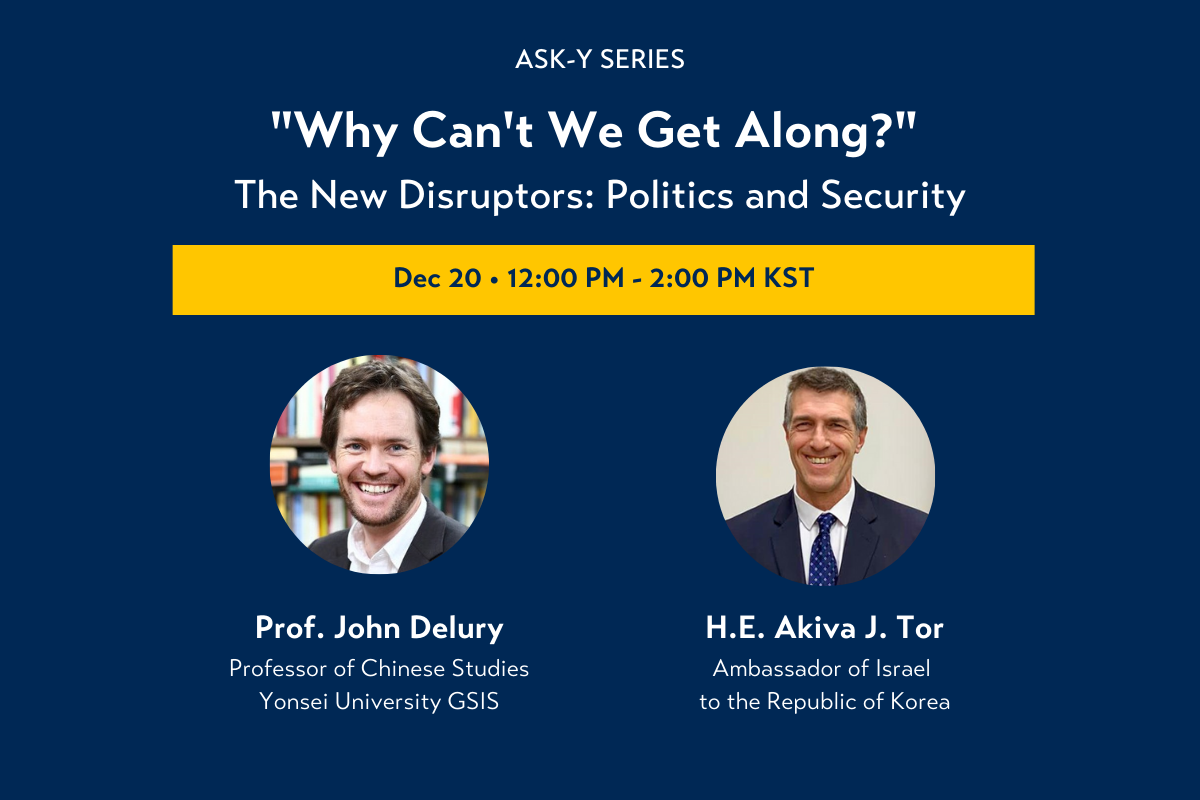 December 20, 2021 — Following our previous session, "Why Does Education (Still) Matter? | The New Disruptors: Basic and Higher Education," Asia Society Korea invites you to the sixth and last session of our Asia Society Korea Youth (ASK-Y) program on politics, security, and global sustainability.

The last of our discussions begins with the question, “Why Can’t We Get Along?” as we explore the ongoing rivalry between Beijing and Washington and think about how the rest of the world should respond. The Biden and Moon administrations do not see eye to eye on the best way to manage China. The gap exists not just between Washington and Seoul but also is becoming increasingly apparent all over the world as the U.S. engages its allies and partners to address the challenges posed by Beijing’s agenda. China watchers must remain cognizant of constraints on middle powers like South Korea’s ability to join with partners to counter China, while also creating mechanisms that would allow the said middle powers to take greater risks in resisting China.

Asia Society Korea Executive Director Yvonne Kim invites Prof. John Delury, Professor of Chinese Studies at Yonsei University GSIS, and H.E. Akiva J. Tor, Ambassador of Israel to the Republic of Korea, to discuss why the positioning of smaller countries like Korea is not all bad and there are opportunities to be found. The panel discussion will touch upon a range of questions including but not limited to the role of middle powers, how we engage China, and the implications this will have for our world in “navigating shared futures.”

This is a private session and a recorded video will be available on YouTube.

Akiva J. Tor, Israeli Ambassador to the Republic of Korea

Akiva J. Tor was appointed as the Ambassador of Israel to the Republic of Korea in November 2020. Prior to his appointment to Korea, he started his career as Director at Israel Economic and Cultural Office in Taipei in 1996. After joining Israel’s Ministry of Foreign Affairs, he served as Deputy-Spokesman (1998 – 2000); and Deputy Director of the Department for Palestinian Affairs (2000 – 2002). He also served as World Jewish Affairs Adviser to the President of Israel for about three years since 2003; Israel Consul General in San Francisco and Pacific Northwest (2008 – 2012); and Head of Bureau for World Jewish Affairs and World Religions in MFA (2013 – 2020).

H.E. Tor received his BA in Analytical Philosophy from Columbia University (1981-1985), then pursued his graduate studies and received his MA in Political Science and Contemporary Jewish Thought, and an MPA from Harvard Kennedy School (2002-2003) with the support of Wexner and Goldman Fellowships, respectively.

Amb. Tor served as a paratrooper in the Israel Defense Forces (IDF) (1985-1987) and was honorably discharged as an infantry captain. His most recent published works include Building a Bridge Over Troubled Waters: A Jewish Peace Corps (2015), and The Jewish Blindness (2011).