[ASK-Y] Session 3: Why is the Earth Sick? | Asia Society Skip to main content

The New Disruptors: Climate and Environment 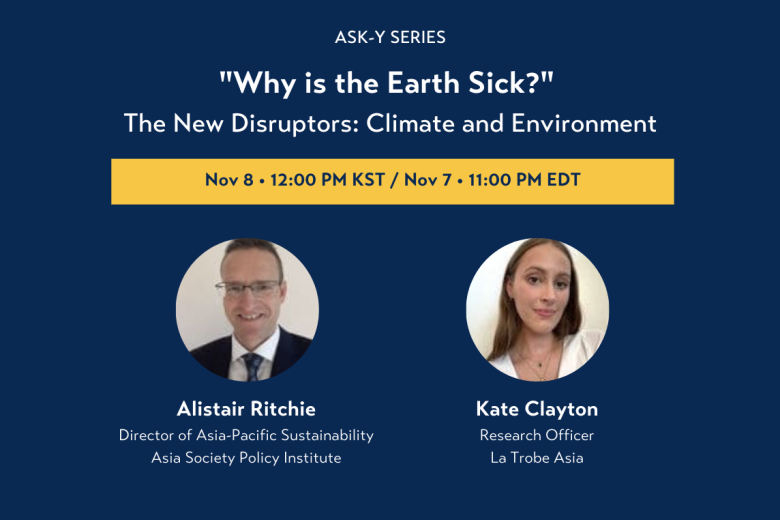 November 8, 2021 — Following our second session, "Why Are We Not Equal? | The New Disruptors: Gender and Equality," Asia Society Korea invites you to our third session of the Asia Society Korea Youth (ASK-Y) program on climate and equality to be held on November 8 at 12:00 PM KST.

The next in line of our biweekly discussions will be titled "Why is the Earth Sick? | The New Disruptors: Climate and Environment" as we probe the latest state of our global habitat and its stark warning that humanity's future could be filled with risk profiles.

But this future is not set in stone. Our concerted efforts to mitigate climate change could reverse trends, accelerate technological progress, and create geopolitical developments that drastically reduce our footprint. The world at the end of the 21st century could turn out to be radically different.

Asia Society Korea Executive Director Yvonne Kim invites Kate Clayton, Research Officer at La Trobe Asia, and Alistair Ritchie, Director of Asia-Pacific Sustainability at Asia Society Policy Institute (ASPI) to discuss the environment-sustainability nexus by examining why the climate is changing, and how we can prepare for the future.

The ASK-Y program is a public event and you can register for the event here.

Alistair Ritchie is Director of Asia-Pacific Sustainability at the Asia Society Policy Institute (ASPI), where he leads and oversees activities on Asian carbon market development and ASPI’s overall sustainability portfolio. Alistair is an international expert in greenhouse gas emissions trading systems (ETSs), and a known leader in their development - including as leader of the European Commission project to support the Korean government’s implementation and upgrade of their emissions trading system (the first national ETS in East Asia). He was also the technical lead for the European Commission project to support the development of China’s national ETS. In Europe, Alistair played a key role in improving the EU ETS through managing and directing several projects to support Phase 3 and 4 policy design and implementation.

He has over 25 years of experience in various areas of climate change, energy and air pollution control strategy and policy. Aside from his projects in Europe, China, and Korea, he has worked in Taiwan, Russia, Saudi Arabia, and the U.S.

Alistair holds a bachelor’s degree in chemical engineering as well as an MBA.