[ASK-Y] Session 2: Why Are We Not Equal | Asia Society Skip to main content

The New Disruptors: Gender and Equality 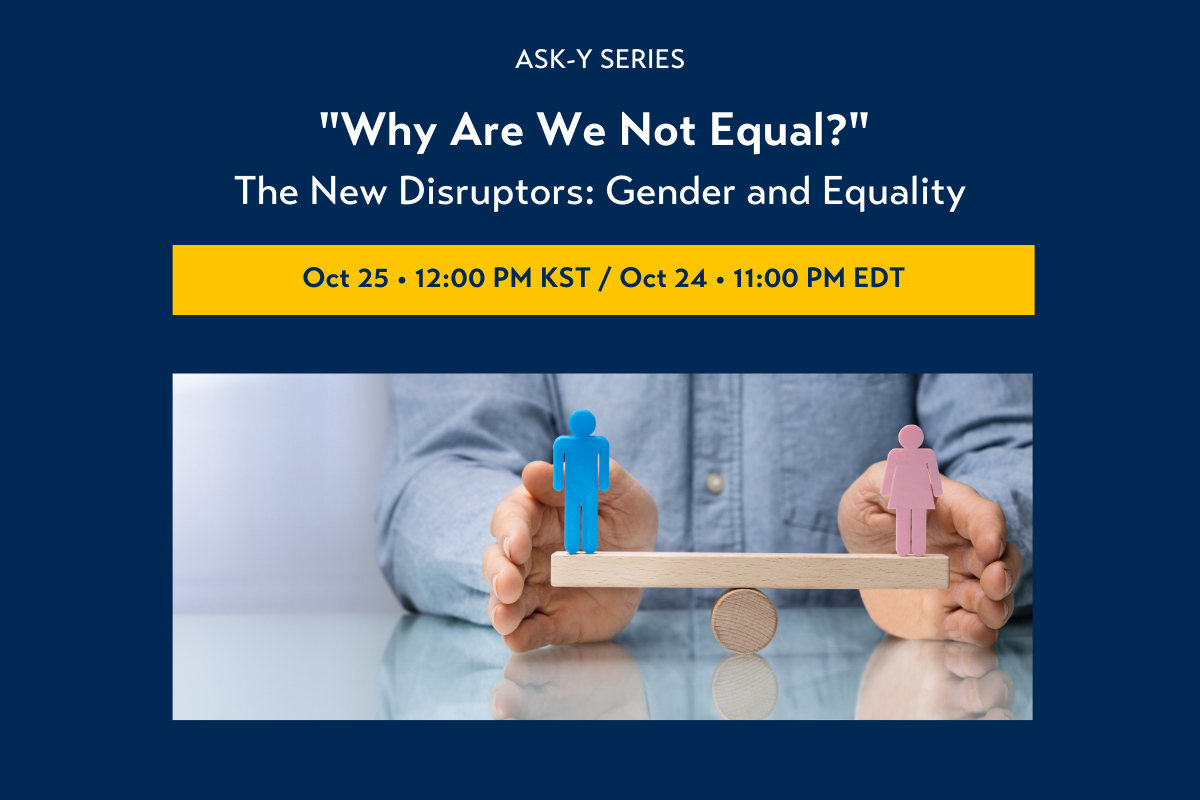 October 25, 2021 — Following our introductory session, "Re-thinking Sustainability and Youth in the COVID Era," Asia Society Korea invites you to the second session of our Asia Society Korea Youth (ASK-Y) program on gender and equality to be held on October 25 at 12:00 PM KST.

The next in line of our biweekly discussions will be titled "Why Are We Not Equal? New Disruptors: Gender and Equality" as we probe the dual challenges of enhancing equality and countering discrimination across the socio-economic and gender domains. The discussion contributes to the public discourse on the inequalities-sustainability nexus by examining the consequences of unrectified disparities and discrimination in our everyday livelihood.

The ASK-Y panel discussion is hosted by Asia Society Korea Executive Director Yvonne Kim, inviting H.E. Maria Theresa B. Dizon-De Vega, Philippine Ambassador to the Republic of Korea, H.E. Eric Teo Boon Hee, Singaporean Ambassador to the Republic of Korea, and Symone Gosby, Coordinator of Generation Equality Engagement at the United Nations Foundation. The guest speakers will be joined by the 10 young ASK-Y cohorts from eight countries around the central theme of sustainability and youth — expected to be the start of a strong tradition of public diplomacy and transnational youth networks (TYNs).

This is a public event and you can join the webinar via Zoom here.

H.E. Maria Theresa B. Dizon-De Vega, Philippine Ambassador to the Republic of Korea

Ambassador Dizon-De Vega is a career diplomat with over 25 years of experience serving in different parts of the world has roots in Porac, Pampanga, Capas, Tarlac, and Bangued, Abra. She joined the Department of Foreign Affairs after placing 1st in the Foreign Service Officers Examination in 1994. She has since served in various offices in the DFA as well as foreign postings in Mexico (as Third and then Second Secretary and Consul), Hong Kong SAR, China (Consul), the United Kingdom (Minister and Consul General) and New York (Deputy Consul General and Manager, Philippine Center New York), USA. She most recently served as the Philippine Ambassador to the Federal Republic of Germany

She likewise obtained her Juris Doctor Degree (JD) from the Ateneo de Manila University School of Law and passed the Philippine Bar in 2000. She has a Graduate Diploma in China Business Law (with Distinction) from the University of Hong Kong. She was a fellow of the Centre of Asian Studies of the University of Hong Kong in 2008 and published a study on “Harnessing Remittances for Development: the Philippines and Indonesia.”

Ambassador Dizon-De Vega is the recipient of various awards and decorations conferred by past Presidents of the Republic of the Philippines including the Order of Sikatuna-Rank of Dakilang Kasugo (Gold Distinction), Order of Lakandula-Rank of Pinuno (Officer), and Gawad Mabini-Rank of Dakilang Kasugo (Commander). She was likewise conferred by the Government of the Kingdom of Spain with the Medal of Civic Merit (Isabela La Catolica) for services rendered during official and high-level visits of Philippine Delegations to Spain.

She speaks Spanish, French, and Kapampangan in addition to English and Pilipino. She is married to Eduardo Jose A. de Vega, currently the Philippine Ambassador to Belgium and Luxembourg and Permanent Representative to the European Union. They have a daughter, Montserrat.

Ambassador Eric Teo has been the Ambassador of the Republic of Singapore to the Republic of Korea (ROK) since August 2019. Mr. Teo was the Director-General of the Northeast Asia Directorate in the Ministry of Foreign Affairs (MFA), Singapore, from 2014 to 2019. In this position, he was involved in the organisation of (i) the historic summit meeting between US President Donald Trump and DPRK State Affairs Commission Chairman Kim Jong Un in Singapore in June 2018 and (ii) the historic cross-strait meeting between Mr Xi Jinping and Mr Ma Ying-jeou in Singapore in November 2015.

Mr. Teo graduated from the National University of Singapore with a Bachelor of Arts (Upper Honours) Degree in 1996. In 2005, he obtained a Master Degree in International Public Policy from Johns Hopkins University, USA. He attended an Executive Programme at the Peking University, China, in 2010.

Mr. Teo was awarded the Public Service Administration Medal (Silver) by the Singapore Government in August 2019. In December 2020, he was awarded the Order of Diplomatic Service Merit (First Class) Gwanghwa Medal by the ROK government.

Mr. Teo is married to Mdm Kim Minjae and they have a son and a daughter.

Symone Gosby is the Coordinator for Generation Equality Engagement at the UN Foundation and a budding advocacy communication specialist. She is passionate about using the power of communication and her bilingual (Korean and English) skills to spread awareness and action around social justice and human rights.

Before assuming her current role, Symone worked as a Program Coordinator on the Human Rights team at Vital Voices Global Partnership, where she provided regional knowledge about Asia for a multitude of programs. Prior to joining Vital Voices, Symone lived, worked, and studied in Seoul, South Korea.

Previously, Symone served as a writer and production assistant with CJ E&M and was a Fulbright Junior Research Fellow for the U.S. Department of State, studying the disability rights movement in Korea and its effect on Korean society. She is now pursuing an M.A. in Strategic Communication at American University.

Ms. Kim is also noted for her contributions to news media. She has worked for Newsweek; WZRC-NY Radio Korea; and New York’s WMBC-TV Channel 63, where she interviewed Heads of State, governors, and former Mayor of New York Rudy Giuliani.

Ms. Kim was born in Seoul, Korea, and was educated in Hong Kong and in the United States. She has a Bachelor of Arts degree from Columbia University in East Asian Studies. She’s fluent in Korean and English.