A Tale of Two Cities

August 31, 2021 ㅡ There is no question that both a strong sense of repudiation and apathy exists when it comes to colonial-era structures and it also runs through the public psyche of the Korean people. Putting aside the elderly gentleman who dismissed the Mikuni Apartment in Namsan-dong as nothing more than a place to meet up a friend, I encountered while photographing different colonial-era structures a young fellow speaking on the phone who wondered out loud why anybody would have interest in a dilapidated building that wasn’t even photogenic to his eyes. In his mind, the building was simply too old to be relevant anymore. 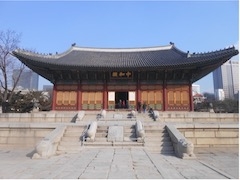 Built in 1906, Junghwajeon Hall, the main hall of Deoksugung Palace, was the hall in which major state affairs were conducted, official meetings held, and foreign envoys received.

When we consider the early modern architecture is what came to replace Korea’s beautiful, well-ordered Joseon-era city centers, hostility toward colonial artifacts is quite understandable. The Japanese occupation did in fact serve as a destructive force which dismantled more than just a handful of Joseon fortresses and dozens of royal structures in the three decades during which Korea’s traditional landscape was erased. Some scholars estimate that more than 90% of Joseon-era architecture was destroyed during the Japanese occupation. It then becomes rather poetic that South Korea’s industrialization has since obliterated the colonial buildings that were once so ubiquitous.

Post-Colonial Korea: A Look Back from the Future

However, there is a strong argument for preserving colonial-era buildings considering that much of Korea’s architectural heritage is reconstructed. Some Joseon Dynasty buildings are outright new, having been “reenacted” in the last decade or two, and these reconstructions — such as the Dongnae Eupseong Fortress in Busan, the restored roofs of Deoksugung Palace and the planned stone walkway nearby — are sometimes untrue to their original form let alone partially augmented or fabricated to fill the gaps of history. As such, they lack authenticity and run the risk of falling into revisionist historiography, or at least enabling a false representation of what the originals looked like. 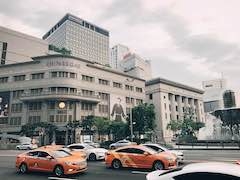 The main branch of Shinsegae is one of the oldest department stores in Korea which opened in 1930. The building was later used as a U.S. Army PX.

Colonial architecture, though frequently managed poorly, retains its original scheme. It is that authenticity in which local citizens place value and to which tourists assign meaning. With so few truly old structures remaining in South Korea, early modern architecture should then be held in much higher regard than it is.

Authentic and antiquated artifacts are significant, for they not only instill in us an experiential understanding of bygone periods that visuality and annals of texts cannot. They also offer today’s cities a sense of remembrance and tradition in an otherwise sea of concrete and cement.

"Beauty perishes in life, but is immortal in art"

Take for instance the popular global tourist destinations like New York, London, Paris, and Rome, which Seoul aspires to join the ranks of and arguably have succeeded in recent years. These cities hold a sense of “oldness” because their sought-after infrastructure have both stood the test of time and been in use for that same time span.

This is not to say that Korean cities should be Eurocentric or westernized. Rather, to demonstrate that tangibility across a diverse set of architectural designs in urban cityscapes are partly what drives the most attractive cities to be the tourist powerhouses they are.

The issue of inauthentic and reconstructed architecture does not, however, mean that South Koreans make absolutely no effort to preserve old buildings. Early modern structures can be given a cultural heritage status if deemed historically significant by the government’s Cultural Heritage Administration, though there are issues with these assignments. 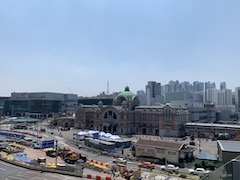 Juxtaposing the old (1925) and new Seoul Station buildings is the Lotte Outlets Seoul Station Branch which sits in-between the two structures demarcating the artifacts of the 20th and 21st centuries, respectively.

While this label offers relatively strong protection, the “Registered Cultural Heritage” status is much weaker. It recognizes the site or building as valuable, yet also grants its owner property rights. As such, it does little to guarantee that the structure will be maintained in as authentic or original a state as possible. The care of a Registered Cultural Heritage site is mostly dependent upon the owner, meaning that if they feel like knocking out a wall to put in floor-to-ceiling windows, they might be able to after some paperwork.

Over the last couple of decades, more and more old buildings — many former banks, government buildings, churches, impressive private estates, waterworks, and even some minor shops and houses — have received some kind of cultural heritage status.

Furthermore, various local governments have recognized the economic potential of preserving and restoring early modern architecture. The current revitalization project in Gunsan of Northern Jeolla Province, despite being colonial-centric, has proven to be immensely successful and popular with visitors. The old port area of Chemulpo in present-day Incheon has seen a number of building restorations, and the former migrant fishing village of Guryongpo in Northern Gyeongsang Province has also rescued a street of colonial structures.

Many of the structures and establishments designed and built during the Japanese colonial era still remain intact in the city of Gunsan. Many of these remaining buildings today serve as museums to educate both Koreans and foreign visitors the country's modern history.

Artists and cafe owners have also taken an interest in early modern architecture. The Seochon neighborhood of Seoul is a good example of this. However, such an interest can be found all over South Korea. As a trend in using old buildings for art spaces and coffee shops has slowly grown, there is perhaps a growing niche appreciation for, if nothing else, building designs that are not concrete rectangles. This offers a kind of temporary, unofficial protection for some early modern structures. 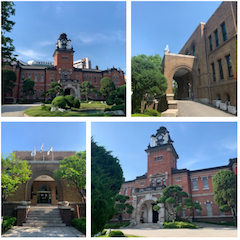 At least all the building owners I have spoken with show an interest in maintaining their space’s sense of history. While there is still a lot of work to be done, this gives hope that some colonial-era buildings may survive after all. In a country that ostensibly values history and tradition, the subject of colonial architecture and its survival is a cautionary tale of what happens when commercial interests and industrial policy are not moderated by a conscious effort to preserve our heritage.

That means there is little time to salvage what remains before they all become just another Gangnam, Myeongdong, or Itaewon.

This column was written as a part of the Leo Gala Series. The views expressed in this article, however, are strictly personal and do not represent Asia Society Korea.

Schoni Song joined Asia Society Korea in November 2020. As Program & Communications Manager, he reports directly to the Executive Director in ensuring the effective implementation of programs through consistent messaging and planning. His primary responsibilities include developing programmatic blueprints and liaisoning with POCs of partner institutions to help the organization gain appropriate exposure. His most recent (and ongoing) work includes the Asia Society Korea Youth (ASK-Y) initiative.

Before joining Asia Society Korea, Schoni served as a Capstone Consultant at the U.S. Department of State's Bureau of International Narcotics and Law Enforcement Affairs (INL) where he assessed the baseline for maritime-related crimes in the South China Sea to better enable INL to better understand emerging trends and policy implications. In between his graduate studies, he completed multiple research internships at think tanks such as the Asia Society Policy Institute, East-West Institute's East Asia Program, and the Hudson Institute's Center for Political-Military Analysis. In South Korea, he was Program Assistant at the ROK National Assembly's International Affairs & Protocol Bureau and Army Translator at ROK Army's 2nd Operational Command.

Connect with Schoni on LinkedIn or via E-mail.