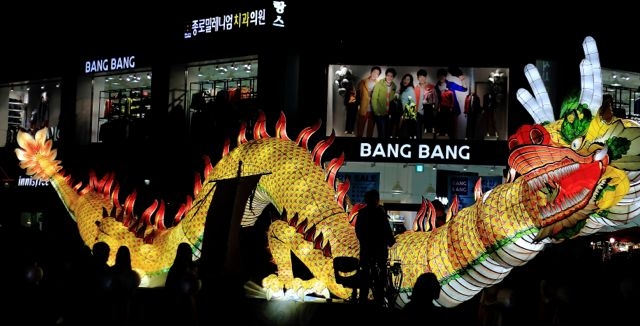 In Korea the birthday of Buddha is celebrated according to the lunar calendar. This day is called “Seokga tansinil”, meaning "Buddha's birthday" or “Bucheonim osin nal” meaning "the day when the Buddha came". It falls on the eighth day of the fourth month according to the lunar calendar and this year the celebration falls on May 6th. Buddha’s birthday is not only a holiday for the 15 million people who pray at Buddhist temples all over Korea on a daily basis, but a public holiday enjoyed by everyone. It is a carnival day when Korean culture and tradition is celebrated.

Take a visit to one of the many temples in the country and one will see lotus lanterns that cover the entire temple along with the surrounding yards and streets. On the day of Buddha's birth, many temples provide free meals and tea to all visitors who make the journey. The breakfast and lunch provided are often a mixed rice and vegetable dish known as “bibimbab”. Outside in the temple yards and parks, traditional games and rope jumping are organized. There are mask dances and acrobatic shows with tightrope walkers.

Everywhere in the world, Buddha's Birthday is known as the Festival of the Lanterns. Colored paper lanterns with candles inside them are made that are mostly red, pink and gold. A small paper tag is hung from the bottom of the lantern and on that tag, you write your name and a wish or a hope that you carry in your heart. The largest lantern festival happens in downtown Seoul and this year runs from April 25 through to May 11 with the annual parade being the highlight.

This year’s festival takes on added a far more sombre tone however as the grief from the recent ferry disaster continues to engulf the nation. In Seoul on Saturday night, participants holding funeral streamers bearing messages for victims of the capsized passenger ship Sewol, marched to commemorate the victims. South Korean Buddhists dedicated this annual lotus lantern festival, the highlight of its celebrations for Buddha's birthday, to those killed in the accident and pray for the safe return of possible survivors.