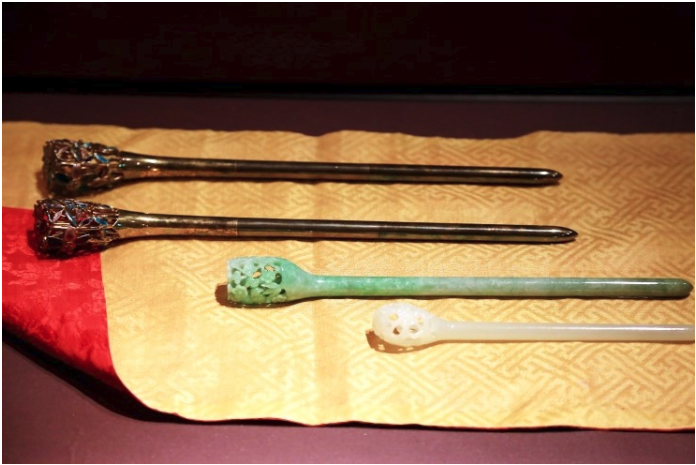 People tend to disregard the small things in life. When someone is wearing a nation’s traditional attire, we usually admire items such as the skirt, dress, or jacket. The small accessories often pass by our attention. Similarly, you may not have noticed Binyeo, a dazzling Korean traditional ornamental hairpin that varies in its material, shape, and color.

In traditional Korean society, married women used to brush their long hair into neat buns, and the Binyeo was used to hold the bun in place. The Binyeo, however, was more than just a practical accessory since Korean ancestors believed each Binyeo carried a special spell, which captured the wearer’s soul. In other words, they viewed it as a reflection of the woman’s inner self. If the women were to lose or take off her Binyeo, it was believed that she would lose her fidelity and dignity.

Binyeo, surprisingly, used to be worn by both genders. However, after the Joseon Dynasty (1392 CE – 1910 CE), it became an item exclusively for women. Moreover, the groom would gift it to his bride as a symbol of love when they joined in matrimony. According to oral traditions of the ancient cultures, Binyeo also acted as a medium for lovers to meet.

Unfortunately, during the Silla Dynasty (57 BCE – 935 CE), a decree prohibiting the use of Binyeo was announced in accordance to the Bone-rank system that segregated society on the basis of hereditary proximity to the throne. For instance, the shape of the Chinese phoenix and dragon were only permitted to the imperial family; however, commoners were granted the opportunity to wear a dragon-shaped Binyeo at weddings.

Finally, the name of the Binyeo depends on the shape of the Jamdu, the convex part at the end. Many Jamdus signify auspicious signs such as wealth, good health, and longevity.

So, if you get a chance to wear it, may good luck always be with you.