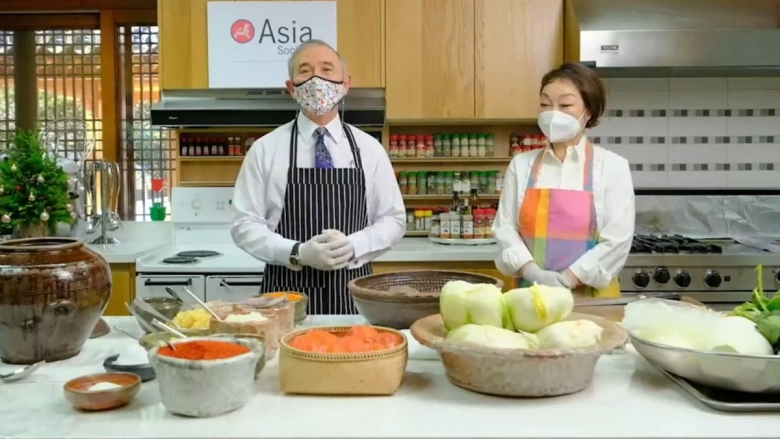 As a part of the Leo Gala Series to give wider publicity to Korean culture and celebrate its beauty beyond the facade, Asia Society Korea presents to you a special webcast featuring U.S. Ambassador H.E. Harry Harris and South Korea’s famous food specialist Hye Jung Lee (aka “Big Mama”) showcased how to prepare the most authentic Korean kimchi in the face of the COVID-19 lockdown blues. This time around, we plan to go a little further down the kimchi rabbit hole.

Like Chef Lee said in the webcast, the first kimchi was neither red nor spicy. The genesis of this national food dates back 3,000 years, but it wasn't until much later that kimchi gained its signature red color. With over 200 documented types of kimchi out there, the average South Korean consumes a total of about 26 kilograms of various types of kimchi every year. There are even special fridges made just for kimchi.

Prized for its health properties, kimchi has become an iconic dish of Korean cuisine which takes up a huge portion of the standard Korean diet. Our favorite spicy fermented condiment is good for so much more than just eating straight out of the jar — though you can certainly find Koreans doing that regularly. But you’ll never fully understand kimchi by eating it as a standalone side dish. When used properly, this uniquely spiced food can be hugely versatile, livening up savory and sweet dishes alike.

So, members of Asia Society Korea handpicked Top 50 Kimchi Recipes for you today. From festive kimchi-making to deliciously spiced army stew and the guilty pleasure of veggie-packed Korean kimchi pancakes, here are 50 kimchi-filled recipes and dishes that will blow your mind away. K-wave? Let’s talk about a Kimchi Wave!