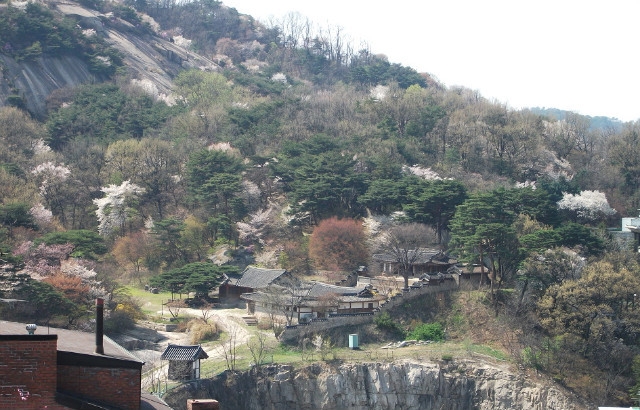 August 16th, otherwise known as “Malbok”, signaled that summer is almost over and cooler temperatures are just around the corner. With this in mind, here at Asia Society, we hope you will finally be able to step away from the air conditioner and get out and about again. Thus, this month’s travel series will focus on a great little neighborhood in a beautiful valley that is found, surprisingly, almost in the center of Seoul.

Buamdong, located northwest of Gyeongbokgung Palace, is like stepping out of the urban sprawl and into a new world. Visitors are greeted by tranquility, greenery, and beautiful fresh-water streams. Buamdong is an area that has managed to hold onto its traditions, unlike many other parts of Seoul that have succumbed to gentrification over time.

Buamdong, or the “big holy rock”, gets its name from a tale about a boulder that sat on a steep, slippery incline. The story goes that if one rubs a stone against the boulder as many times as their age, their greatest wish will come true. The legend comes from a woman who apparently carried out this task on a daily basis until her husband safely returned from war with the Mongols. It later became a common praying ground for soon-to-be mothers who were desperate to give birth to a son.

While you cannot see the boulder today, Buamdong is the perfect setting to enjoy nature with a quiet stroll through the forest, which is recognized as an ecological preservation spot. The streams, rugged gardens, and tree-lined trails provide the perfect escape from the hustle and bustle of the city. Furthermore, in the time of the Joseon Dynasty, the area was used by a number of high-ranking officials and aristocrats who wanted to take advantage of the shady forests, cool streams, and views of Bugaksan and Inwansan mountains. Some of the villas built for these prestigious members of society still exist today. There are a number to choose from but if you only have time to see one, we would recommend Seokpajeong, which was the home of a prince-regent and the most famous.

The area also boasts a relaxing street laden with a number of tasty restaurants and coffee shops including one that is famed for being used in a popular Korean television drama called “Coffee Prince”. Another unique aspect is that you will not see any of the typical franchises like in other areas of Seoul as every business here is independently owned. Other attractions worth checking out while on the main street are the small galleries and museums dotting the area. Whanki Museum houses the work of an abstract painter named Whanki Kim, and the chopstick and wax figure galleries are also worth a look.

The closest subway station to Buamdong is Gyeongbokgung Station on line 3, and if you come out Exit 3 there are a number of buses that run through the area such as 1020, 7022, and 7212. Buamdong is a great place to spend an evening or even a full day, and you will leave feeling refreshed after getting a taste of nature so close to home.