Art & Culture During the Reign of King Sejong 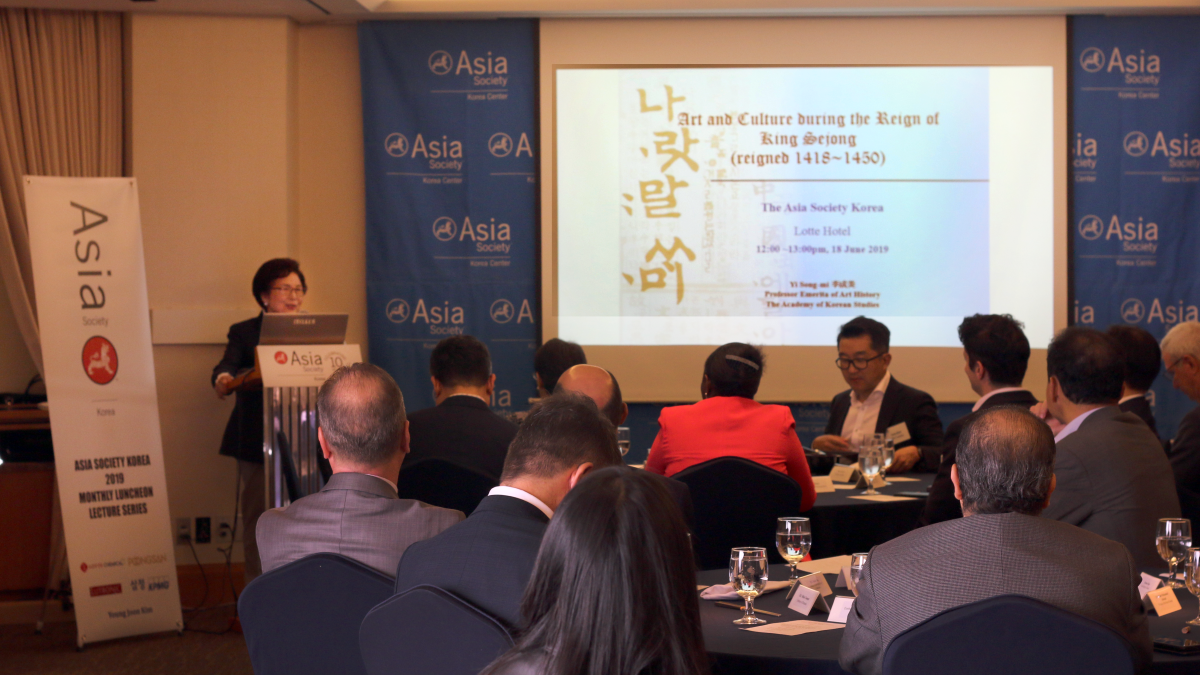 Asia Society Korea’s final luncheon before the summer break took place on Tuesday, June 18. Notably, this month’s event took a step away from politics and focused on a historical aspect of Korea’s artistic and cultural past. Thanks to the guidance of Professor Song-mi Yi, Emerita of Art History at the Academy of Korean Studies and Director of the University Museum at Duksung Women’s University in Seoul, those in attendance were fortunate enough to garner an understanding of “Art & Culture During the Reign of King Sejong”.

Professor Yi opened with a brief introduction on the early days of Hangeul, with a demonstration of some important early documents such as essays, memoirs, and newspaper articles. She then moved on to the central point of her talk, which highlighted important records of King Sejong’s reign. The professor noted, interestingly, that King Sejong’s veritable records reveal four features that differ from all of the other Korean kings: the five rites, music, geography, and astronomy/calendar.

The five rites, Professor Yi explained, are directions on how to conduct oneself during important ceremonial and state events. Examples of costumes, utensils, and guidance on behaviors were shown to the audience as representative examples.

Next, Professor Yi demonstrated the importance of music during this period, particularly ceremonial court music that used Chinese influence to produce a novel Korean style. Instruments used throughout King Sejong’s reign were shown to the audience; for example, bells that looked identical but differed in sound due to their thickness.  Professor Yi also explained that music was critical to ancestral worship and this was a time when regular citizens, not just those of higher status, were able to enjoy music. A number of music sheets from that era also revealed that a pentatonic scale was used.

In relation to geography, Professor Yi showed a book that highlighted the eight provinces and contained sections that covered areas such as administration, economy, military, and industry. Thus, geography, at that time, was observed from a human perspective rather than physical; moreover, the document provided helpful insights into industries such as farming and production methods.

Finally, the astronomy/calendar section demonstrated how King Sejong ordered scholars to study the movement of the seven major planets. His motivation was to figure out the timing of lunar and solar eclipses. Important discoveries in this area resulted in the calendar becoming more accurate, which was critical for important tasks such as farming. Professor Yi also showed an example of a rain gauge and a large celestial globe from this period.

Before wrapping up her talk, Professor Yi displayed a number of other paintings and artifacts by artisans from that time, and then took a couple of questions from the audience. The first clarified King Sejong’s desire to advocate and elevate the position of artists at that time. The second made it clear that Korean art and culture should not be seen as an imitation of Chinese art, but rather an extension that has its own unique features worthy of similar admiration. This concluded another highly informative luncheon, with those in attendance even more enamored with Korea’s captivating history.