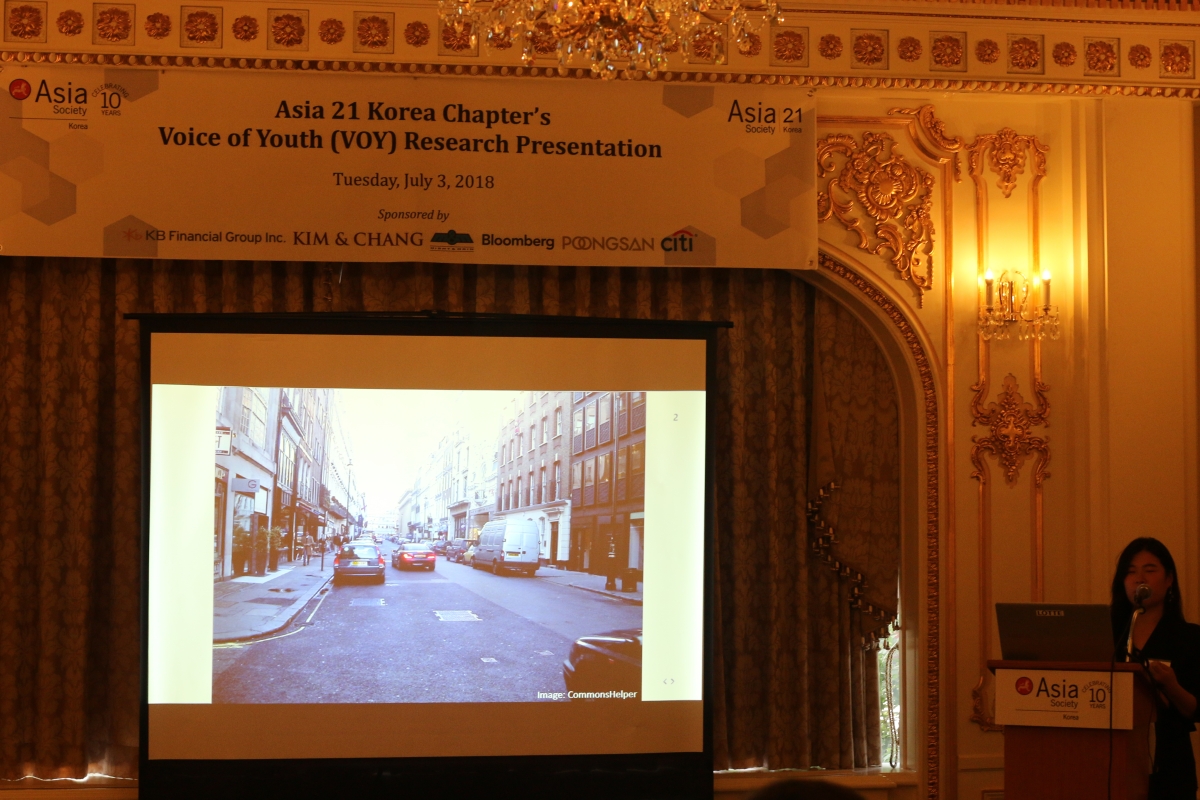 Asia Society Korea reaffirmed its commitment to providing a space for the youth of Korea to share their ideas by holding its first “Voice of Youth – Research Presentation” on Tuesday, July 3rd.  Over the past couple of months, university students have been submitting their research papers, and following a tough selection process, five finalists were chosen to present at this week’s event.
The presenters from a number of local universities, covered a diverse range of topics, which made for an informative afternoon. Each candidate was assessed and graded in terms of their knowledge, planning, strategy and applicability, personal qualities, and enthusiasm. Seven distinguished judges were in attendance to pick a winner: Chong Ghee Ahn, Senior Advisor at Kim & Chang; Jimmy Chul Won CHEY, President of MIGHT & MAIN; Sung-Joo Han, Professor Emeritus, Korea University; Eddie Suk Hyun Kang, Creative Director at Happy Cell Inc; Sean Sea-Yeon Kim, CEO of W Investment & Finance Co., Ltd; Yvonne Kim, Executive Director at Asia Society Korea; Hong-Koo Lee, Chairman of Seoul Forum; and Peter Pae, Seoul Bureau Chief at Bloomberg.

The representative from Chung-ang University, Hong-il Kim, got things underway with a talk about cryptocurrency regulation in South Korea. Given the recent interest in the alternative currencies, the issue of legalization and its impact on society requires attention. Kim used his time to make suggestions for establishing effective policing and regulatory guidelines for blockchain technology in Korea. After presenting the situation in Korea and outlining the approaches taken by other countries, Kim urged policymakers on the peninsula to speed up their decision making and cooperate with the private sector. Through pertinent regulation that clamps down on illegal activities, fosters the technology, and works with international partners, Kim believes cryptocurrencies offer a great opportunity for Korea and the world as a whole.

The second presenter, Eun-ji Park, is a well-traveled exchange student from Ehwa University and she covered South Korea’s position in North-East Asia’s integrated carbon market. Park opened by noting that since the Paris Agreement, North-East Asian countries, including Korea, have yet to find acceptable solutions to the carbon pollution issue. With this in mind, she set out to analyze the difficulties faced by domestic stakeholders in this area and the reasons why international cooperation has been unsuccessful. Through detailed research, Park demonstrated that Korea, China, and Japan are not ready to implement linkage-ready markets due to individual domestic issues that must be overcome as linkage is critical for improving the current situation.

Next up to the podium was Eun-kyung Son with her research on female entrepreneurs in South Korea and their effect on the global economy. Son, a Sogang University student, pointed out the importance these entrepreneurs, both foreign and immigrant, can have on an economy, but she also explained that data shows female entrepreneurs are underrepresented, and that there is a lack of research analysis in this area. Following interviews with a number of subjects, her paper made recommendations such as the collection and accumulation of essential data, sustainable business mentorships, and equal access to a childcare support system.

The fourth speaker, Gah-wan Yoo, used her intern experience in the U.S. as motivation for her research into financial literacy programs for immigrant women in South Korea. The Ehwa Woman’s University student observed that most immigrant support programs on the peninsula focus on language education, vocational training, and psychological treatment without any consideration for economic education. She recommended, firstly, that the Ministry of Gender Equality and Family and the Ministry of Strategy and Finance unite their programs to avoid redundancy. She also called for programs that operate on a long-term basis rather than as one-off sessions, which she claimed are inadequate.

To wrap-up the event, a student from Yonsei University, Lee Youjin, used her concerns about the future of many universities in Korea as motivation to investigate how an understanding of the Fourth Industrial Revolution can help with the issue. Lee argued that Korean universities need an innovative model to improve their competitiveness and this can be achieved through a better understanding of where science and technology is headed. Furthermore, Lee believes Korea should move to a communicative approach to education, which allows students to interact with numerous people in the field of science rather than follow a traditional lecture-style approach.

All five participants performed exceptionally well and the judges face a difficult task in selecting a winner. The final decision will be announced at an awards ceremony at the end of this month. The winner will receive a certificate and cash prize, but more importantly, the event demonstrated the importance of hearing ideas from diverse groups of people.