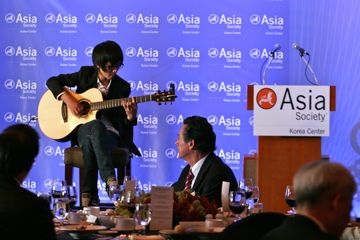 The Case for Free Trade - The Status and Prospects for the KORUS FTA in the US
January 19, 2010
Lotte Hotel Seoul
The time for a United States-Korea Free Trade Agreement (or KORUS FTA) is now, argued Amy Jackson, the new president of the American Chamber of Commerce (AMCHAM) in Korea. Appearing as the guest speaker at the Asia Society Korea Center's first monthly luncheon of the year, Jackson shared her insights into the KORUS FTA's prospects for approval with Asia Society members. Jackson, a former Deputy Assistant U.S. Trade Representative for Korea, has years of experience in the development and implementation of US trade policy toward Korea, and supported the launch of US-Korea free trade agreement negotiations throughout her tenure. She is also a long-term member of the US-Korea FTA Business Coalition.

In Seoul, A Glimpse Across the DMZ
January 25, 2010
Lotte Hotel Seoul
The Asia Society Korea Center hosted a special book signing cocktail reception for Barbara Demick, Beijing bureau chief of the Los Angeles Times, at the Lotte Hotel Seoul's Pierre's Bar in celebration of her newly published book, Nothing to Envy: Ordinary Lives in North Korea. This was Demick's second talk to Asia Society members, her first being at the New York Center on January 7. Prior to the book signing, Demick briefly discussed her visits to North Korea and Nothing to Envy, which focuses on refugees from Chongjin, an impoverished industrial capital that is North Korea's third-largest city. H. Kim, one of the North Korean refugees Demick interviewed for the book, was also on hand for this portion of the program.

From Japan, A High-Level Visit
February 11, 2010
Lotte Hotel Seoul
His Excellency Okada Katsuya, the Japanese Minister for Foreign Affairs, visited the Asia Society Korea Center for a discussion with the Center's board members and Korea's business leaders on the prospects of the Korea-Japan Free Trade Agreement.

Blood Brothers, or Worlds Apart?
February 23, 2010
Lotte Hotel Seoul
Canada's Ambassador to both North and South Korea, H.E. Ted Lipman, gave a talk to the Asia Society Korea Center titled "Blood Brothers, or Worlds Apart? A Canadian Ambassador's Personal Reflections on the Two Koreas," in which he discussed Canada's relationship with the two Koreas" Based in Seoul for the last two and a half years, Lipman has made more than half a dozen trips to North Korea. In his address, delivered before a full luncheon audience of approximately 100 people, the Ambassador noted the similarities as well as the more obvious differences between Canada's dealings with each half of the Korean Peninsula.

A Hermit No More: Korea in the 21st Century (A German Perspective)
March 16, 2010
Lotte Hotel Seoul
Germany's Ambassador to Seoul, His Excellency Dr. Hans-Ulrich Seidt, cited his own country's experience with reunification in prescribing what South Korea should do to prepare for unification with the North. Speaking at the the monthly luncheon lecture to Asia Society Korea Center members, Seidt cautioned against overconfidence when planning for reunification, and also recommended looking at China's reunification with Hong Kong as another potential model.

Pakistan and Security Environment in the Region
May 25, 2010
Lotte Hotel Seoul
H.E. Murad Ali, Ambassador of Pakistan in Seoul, was the guest speaker at Asia Society Korea Center's May luncheon. He emphasized that Pakistan remains committed to fighting terrorism in all its forms and manifestations as the menace poses a serious threat to Pakistan's society and that Pakistan wishes to build friendly and cooperative relations with all its neighbors.

Asian-European Relations: Building Blocks for Global Governance
June 15, 2010
Lotte Hotel Seoul
The relationship between Europe and Asia is nowhere near complete-a great deal of work remains to be done for ties to be explored and developed further, and for the full potential of that relationship to be realized. Such was the message delivered by His Excellency Massimo Andrea Leggeri, Italian Ambassador to the Republic of Korea, speaking here at an Asia Society Korea Center monthly luncheon lecture. Before a full house of diplomats, businesspeople, reporters, and Korean students of Italian, the Ambassador delivered a speech titled "Asian-European Relations: Building Blocks for Global Governance."

A New Program Partner
June 25, 2010
Asia Society Korea Center signed a bilateral Memorandum of Understanding with the Visit Korea Committee (VKC), effective June 2010 to maintain close working ties until the Memorandum of Understanding ends. The MOU is intended to strengthen and sustain mutual cooperation for marketing programs, including the "2010 - 2012 Visit Korea Year" title sponsorship, with related joint promotions, and both partners will do their best to develop and coordinate further programs.

Belgian EU Presidency and ASEM 8 - What We Do Together, We Do Better
July 20, 2010
Lotte Hotel Seoul
H.E. Pierre Clement Dubuisson, Belgian Ambassador to Korea pointed out that the ASEM 8 Summit will initially discuss how to exit the current economic downturn and help effectively put the global economy back on track. The veteran emissary emphasized that social cohesion is absolutely essential in a multi-cultural society.  Dubuisson also noted that the ASEM 8 Summit would make an issue of the extension of the European Union and strong partnership between European countries and Asian Countries.

Korea Sovereign Wealth Fund: Who We Are and What We Do
August 24, 2010
Lotte Hotel Seoul
Professional investment specialist and professor-turned-government official Scott E. Kalb recapped his own experience in Korea over the past 30 years before joining Korea Investment Corporation (KIC) as its Chief Investment Officer in 2008. Kalb pointed to an investment in private equity in a variety of sectors, especially in energy and natural resources, as an effective alternative strategy during the recent global financial crisis, and emphasized the need for a return to basics in financial investment, and that the "golden rule" is diversification. He concluded by speculating that further opportunities will arise if and when the KIS invests more aggressively in private markets.

The Unloved Republic? On the Lack of State-Nationalism in South Korea
September 14, 2010
Lotte Hotel Seoul
Brian R. Myers, Professor of International Politics at Dongseo University in Busan argued that a tradition of state "blood-based" or ethnic nationalism on a divided peninsula runs the risk of undermining loyalty to one republic and promoting loyalty to the other, competing, state. In Myers's telling, the political left and right need to join together to move away from a focus on the 1940s and post-colonial heritage and shape a healthy loyalty to the Republic of Korea. Patriotism is not the last refuge of the scoundrel, as Samuel Johnson famously suggested; nationalism is.

Tourism Key to Southeast Asia Development, Say Dignitaries
September 28, 2010
Lotte Hotel Seoul
Asia Society Korea Center members and friends welcomed vice ministers from the Philippines and Singapore, and speakers Simeon P. Marfori, II, Undersecretary of the Philippine Department of Tourism, and Soo Siew Keong, the Singapore Tourism Board's regional director, for a special discussion on public-private partnerships for economic and social development. Marfori emphasized the Philippines as a centrally located nation waiting to be discovered and millions of dollar waiting to be earned. Touching on Singapore's strengths, Soo pointed to the 18 free trade agreements that his country has enacted, Singapore's recognized status as a good place to do business, its location and cruise ship-friendly harbor, and their recently upgraded infrastructure.

Is Korean Traditional Music Like a Stay-at-Home Diaspora?
October 19, 2010
Lotte Hotel Seoul
Dr. Jocelyn Clark, an assistant professor at Pai Chai University's Appenzeller School, fell in love with the gayageum 18 years ago but was surprised to discover the lack of knowledge and interest among Korean people in music made by traditional instruments. Clark believes it may be the responsibility of both cultures to save each other's musical traditions, and that Korea and the United States risk being left behind by being unable to transcend race and background in terms of music. Clark said it is time for Koreans to hear their own music as music, and not as anything else.

From Korea, A Call for Collaboration: Latest Asia Society Task Force Launches from Seoul
November 9, 2010
Lotte Hotel Seoul
Asia Society launched its Task Force report on Asian economic integration and global trade, ahead of the G-20 Seoul Summit by holding a press conference on the report, entitled Growing Together Beats Falling Apart: Making Asian Economic Integration Work for Asia, the United States, and the World, a 39-page report that outlines some of the challenges facing the global-and particularly the Asian-economy now, and offers recommendations for ways forward. The Asia Society Task Force spent a year researching and preparing the report, and the report launch was hosted by Asia Society Korea Center with project chair William R. Rhodes (President and CEO of William R. Rhodes Global, and Senior Advisor and Former Senior Vice Chairman of Citigroup) and project coordinator Jamie Metzl (Executive Vice President of Asia Society). To highlight the intellectual weight behind this project and the support it enjoys in policy circles, Director of the U.S. National Economic Council and top advisor to President Obama on economic policies Dr. Lawrence Summers participated via live video conference from Washington, DC.

New Zealand Positions Itself as Important Diplomatic Player
November 23, 2010
Lotte Hotel Seoul
H.E., Richard Mann, New Zealand's ambassador to Korea, said that New Zealand is a modern and innovative country underpinned by a high quality education system that emphasizes applied knowledge and practicality, and that New Zealand and South Korea are natural coalition partners as they both seek to establish themselves as reliable and relevant partners in bilateral discussions and regional forums such as APEC and ASEAN.

Korea Center's 2010 Holiday Celebration
December 9, 2010
Lotte Hotel Seoul
With almost 200 guests in attendance, including Dr. Hong-Koo Lee, ASKC's Honorary Chairman and former Republic of Korea's Prime Minister; Dong Bin Shin, Co-Chairman of AKSC and Lotte Group's Vice Chairman; and Dr. Kyongsoo Lho, ASKC's co-chairman and Professor of International Politics at Seoul National University, ASKC hosted their year-end holiday cocktail reception. In the preceding year ASKC, in cooperation with the Seoul Global Center, established a scholarship fund for the children of multiethnic families, and the Seoul Foreign Correspondents Club made a generous contribution towards that fund. Steven Herman, Seoul Bureau Chief of the Voice of America and representative of the Seoul Foreign Correspondents Club, and Alan Timblick, the Head of the Seoul Global Center, were on hand to present six elementary school children with prizes and gift certificates from various ASKC corporate contributors. Continuing with Asia Society Korea Center's initiative to aid multiethnic children in Korea, Yvonne Kim, Executive Director of the Asia Society Korea Center, presented the Multicultural Team of the Seoul Global Center with 2000 books donated by the Taipei Mission in Korea, the Royal Thai Embassy, the Ministry of Justice, Yulchon Law Firm, the Lotte Scholarship Foundation, Injicom, Samjong KPMG, and other private donors for ASKC's "Got Books?" campaign. The evening closed with a special performance by Drumcat, an all-female percussion group based in Seoul.