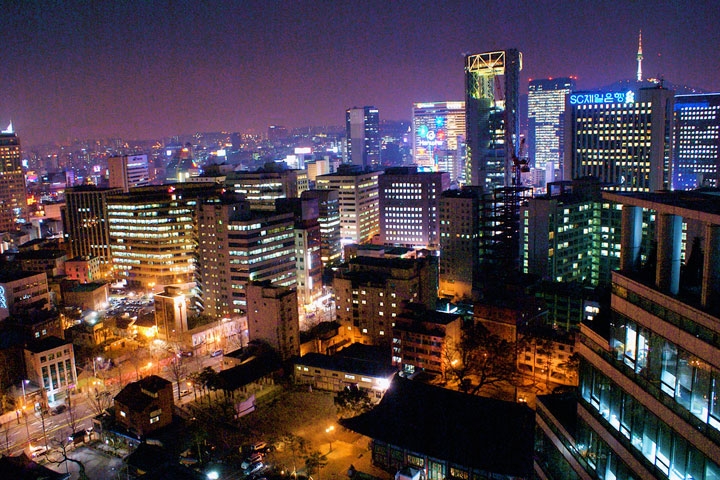 Janice Lyn Marshall, Representative of the United Nations High Commissioner for Refugees (UNHCR), provided ASKC's luncheon audience with a PowerPoint presentation on the "big picture" of contemporary challenges to protecting refugees and others in need of international protection, UNHCR’s mandate, and also about how those challenges manifest in Korea and how UNHCR tries to address them here. She explained that UNHCR has an additional aim in Korea: to enhance public awareness about refugees, both here and abroad, and increase Korean support, both governmental and private, for refugees.

Covering Korea in a Time of Crisis
February 17, 2009
Lotte Hotel Seoul
Donald Kirk, correspondent for the Christian Science Monitor and CBS Radio, was the guest speaker for the Asia Society Korea Center's February luncheon. Kirk has been reporting off and on from Korea since 1972 and is the author of two books on Korea, Korean Dynasty: Hyundai and Chung Ju Yung, and Korean Crisis: Unraveling of the Miracle in the IMF Era, and was co-editor of Korea Witness: 135 Years of War, Crisis and News in the Land of the Morning Calm. He provided the Center's select audience with his experience in Korea as a journalist covering five presidential elections as well as “Korea in time of crisis.”

How Taekwondo Has Helped the World
April 21, 2009
Lotte Hotel Seoul
The Korea Center’s April luncheon speaker was Jin Suk Yang, Secretary General of the World Taekwondo Federation (WTF). Yang was named the new secretary general of the world’s taekwondo governing body in 2007. Prior to joining the WTF, he had been a two-time mayor of Corte Madera City within Marin County, California, and has held high-ranking positions in the police and law enforcement. At the luncheon, Yang not only shared his extensive experience and knowledge in taekwondo, but also emphasized how Taekwondo has been influencing the world and its practitioners. Under the WTF body alone, there are over 70 million practitioners in the world, and nearly 200 countries have opened their doors to Taekwondo.

Past, Present, and Future of the Six-Party Talks
May 26, 2009
Lotte Hotel Seoul
Mr. Nobuyoshi Sakajiri, Senior Diplomatic Correspondent of the China General Bureau of Asahi Shimbun and Asia Society’s Bernard Schwartz Fellow, addressed Asia Society Korea Center’s audience about the “Past, Present and Future of the Six-Party Talks” for the luncheon series gathering in May. As a correspondent who has covered all the rounds of the six-party talks in Beijing since August 2003, he presented specifics on the current issues revolving around governmental discussions, while reviewing the past experiences faced by these countries and the potential for progress with challenges for the future of multilateral diplomatic relations.

Asia Society Korea Center’s First Year Anniversary Event
June 30, 2009
Lotte Hotel Seoul
Asia Society Korea Center celebrated its first year anniversary on June 30, 2009 and held a dinner event to commemorate the successes and progress from initiatives and ventures that were taken after its inauguration on April 2, 2008. Since the founding of the Korea Center, it has conducted 21 high-profile programs and events in policy, business, journalism, art and culture, and hosted nearly 2,000 guests. With the mission to embark on new programmatic initiatives that would strengthen ASKC’s profile as a Center of Excellence within the global Asia Society organization, this event marked the Korea Center’s commitment to the region, adding another important piece to the institution’s evolving global identity.

How Irish are the Koreans? Some Reflections & Impressions
August 25, 2009
Lotte Hotel Seoul
H.E. Eamonn McKee, Ambassador of Ireland to the Republic of Korea, presented the audience at the August luncheon with a unique title to arouse the curiosity of many, “How Irish are the Koreans?” As a recently arrived foreigner to Seoul, he proceeded with an analysis of similarities between the cultures of Ireland and Korea that included the belief in the power of the spoken word and a long tradition of oratory and oral performance. He further added the rebel instinct, intolerance of pomposity and being more emotional than their neighboring countries as commonalities.

Tun Razak, Anwar Ibrahim, and Political Reforms in Malaysia
September 22, 2009
Lotte Hotel Seoul
James Chin, Head of the School of Arts & Social Sciences and Professor of Political Science at Monash University, Malaysia Campus, provided September’s luncheon lecture on the current political climate of Malaysia—a change from previous lectures, which dealt primarily with issues related to the Korean peninsula. Chin gave an overview of the different political scenarios currently facing Malaysia and the prospects for Anwar Ibrahim and his party, Pakatan Rakyat, to overthrow the Barisan Nasional ruling party in order to bring democracy to the country. He delved the social conflict dividing the Malays, Indians, and Chinese ethnicities who are all Malaysian citizens; the economic conditions facing Malaysia for a free trade agreement with the United States; and new media issues with the Internet and youth participation online for both social and political agendas.

A United Korea? Reassessing North Korea Risks
November 17, 2009
Lotte Hotel Seoul
Speaking at the Lotte Hotel, Goohoon Kwon, Seniar Economist and Executive Director at Goldman Sachs, addressed the risks currently posed by North Korea, ranging from the threat of all-out war to the potential costs of unification. Overall, Kwon emphasized that the possible benefits of long-term peace and stability for the Korean peninsula far outweigh any costs that might result from reunification. Addressing a crowd of more than 100, Kwon looked ahead to a long-term, "win-win" scenario for both North and South Koreas based on a gradual integration along the lines of the China-Hong Kong situation rather than instant German-style reunification.

Korea Center's 2009 Year-End Dinner Emphasizes Multiculturalism, Charity
December 8, 2009
Lotte Hotel Seoul
Multiculturalism was the theme of Asia Society Korea Center's year-end dinner at the Lotte Hotel Seoul, as reinforced by screenings, a toy drive, a performance, and the announcement of a major new initiative. This year's holiday event drew more than 250 guests. Prominent among them were His Excellency Dr. Chung Un-Chan, the Prime Minister of the Republic of Korea; Dr. Lee Hong-Koo, ASKC’s Honorary Chairman and former South Korean Prime Minister; Shin Dong-Bin, ASKC’s Co-Chairman and Lotte Group’s Vice Chairman; Lho Kyongsoo, ASKC’s co-chairman and Professor of International Politics at Seoul National University; and Amy Jackson, President of AMCHAM Korea. Prime Minister Chung delivered congratulatory remarks. The Korea Center ran a toy drive during the event and delivered the toys to the Seoul Global Center, which will distribute them to the children of low-income multiethnic families in Seoul. The dinner also featured a short screening of movies from the ASKC-sponsored multicultural film project, Beautiful Coexistence: Multicultural Festival 2009, which was organized by CGV, Korea's largest theater chain, in order to raise awareness about the growing presence of multicultural families in Korea and to promote better understanding of different cultures. The Korea Center also announced its establishment of a scholarship fund for multiethnic and refugee children. The initiative was established in cooperation with the United Nations High Commissioner for Refugees and the Seoul Global Center in order to raise public awareness of these children, to stimulate a discussion about new partnership opportunities, to embrace non-governmental approaches, and to assist in the future growth of the children themselves. The highlight of the evening was a performance of scenes from Charles Dickens’s A Christmas Carol by students from the Seoul Foreign British School. Since the inauguration of the Asia Society Korea Center in April 2008, the Center has conducted 26 high-profile programs and events in policy, business, journalism, arts and culture, and hosted nearly 2,500 guests.

The Case for Free Trade – The Status and prospects for the KORUS FTA in the US
January 19, 2010
Lotte Hotel Seoul
The time for a United States-Korea Free Trade Agreement (or KORUS FTA) is now, argued Amy Jackson, the new president of the American Chamber of Commerce (AMCHAM) in Korea. Appearing as the guest speaker at the Asia Society Korea Center's first monthly luncheon of the year, Jackson shared her insights into the KORUS FTA's prospects for approval with Asia Society members. Jackson, a former Deputy Assistant U.S. Trade Representative for Korea, has years of experience in the development and implementation of US trade policy toward Korea, and supported the launch of US-Korea free trade agreement negotiations throughout her tenure. She is also a long-term member of the US-Korea FTA Business Coalition.

In Seoul, A Glimpse Across the DMZ
January 25, 2010
Lotte Hotel Seoul
The Asia Society Korea Center hosted a special book signing cocktail reception for Barbara Demick, Beijing bureau chief of the Los Angeles Times, at the Lotte Hotel Seoul's Pierre's Bar in celebration of her newly published book, Nothing to Envy: Ordinary Lives in North Korea. This was Demick's second talk to Asia Society members, her first being at the New York Center on January 7. Prior to the book signing, Demick briefly discussed her visits to North Korea and Nothing to Envy, which focuses on refugees from Chongjin, an impoverished industrial capital that is North Korea's third-largest city. H. Kim, one of the North Korean refugees Demick interviewed for the book, was also on hand for this portion of the program.

From Japan, A High-Level Visit
February 11, 2010
Lotte Hotel Seoul
His Excellency Okada Katsuya, the Japanese Minister for Foreign Affairs, visited the Asia Society Korea Center for a discussion with the Center's board members and Korea's business leaders on the prospects of the Korea-Japan Free Trade Agreement.

Blood Brothers, or Worlds Apart?
February 23, 2010
Lotte Hotel Seoul
Canada's Ambassador to both North and South Korea, H.E. Ted Lipman, gave a talk to the Asia Society Korea Center titled "Blood Brothers, or Worlds Apart? A Canadian Ambassador’s Personal Reflections on the Two Koreas," in which he discussed Canada's relationship with the two Koreas” Based in Seoul for the last two and a half years, Lipman has made more than half a dozen trips to North Korea. In his address, delivered before a full luncheon audience of approximately 100 people, the Ambassador noted the similarities as well as the more obvious differences between Canada's dealings with each half of the Korean Peninsula.

A Hermit No More: Korea in the 21st Century A German Perspective
March 16, 2010
Lotte Hotel Seoul
Germany's Ambassador to Seoul, His Excellency Dr. Hans-Ulrich Seidt, cited his own country's experience with reunification in prescribing what South Korea should do to prepare for unification with the North. Speaking at the the monthly luncheon lecture to Asia Society Korea Center members, Seidt cautioned against overconfidence when planning for reunification, and also recommended looking at China's reunification with Hong Kong as another potential model.

Pakistan and Security Environment in the Region
May 25, 2010
Lotte Hotel Seoul
H.E. Murad Ali, Ambassador of Pakistan in Seoul, was the guest speaker at Asia Society Korea Center's May luncheon. He emphasized that Pakistan remains committed to fighting terrorism in all its forms and manifestations as the menace poses a serious threat to Pakistan’s society and that Pakistan wishes to build friendly and cooperative relations with all its neighbors.

Asian-European Relations: Building Blocks for Global Governance
June 15, 2010
Lotte Hotel Seoul
The relationship between Europe and Asia is nowhere near complete—a great deal of work remains to be done for ties to be explored and developed further, and for the full potential of that relationship to be realized. Such was the message delivered by His Excellency Massimo Andrea Leggeri, Italian Ambassador to the Republic of Korea, speaking here at an Asia Society Korea Center monthly luncheon lecture. Before a full house of diplomats, businesspeople, reporters, and Korean students of Italian, the Ambassador delivered a speech titled "Asian-European Relations: Building Blocks for Global Governance."