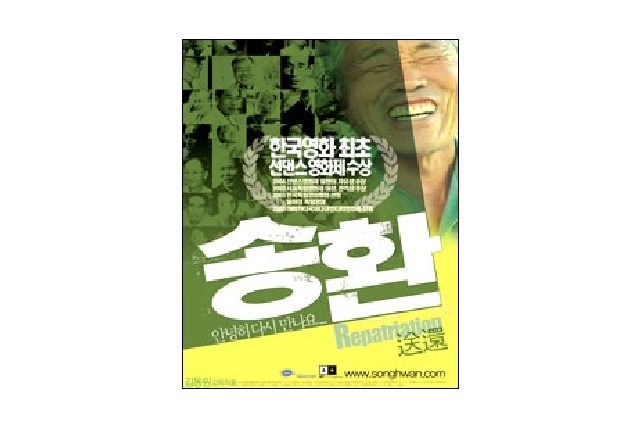 Hailed as a landmark documentary, Repatriation chronicles the lives of "unconverted" North Korean spies who were captured and imprisoned in South Korea for more than 30 years. The filmmaker Kim Dong Won developed a close relationship with them after they moved to his neighborhood after their release from prison. This friendship eventually led him to a film project, which spanned 12 years and 800 hours of videotaping. The film documents their views on Korea's partition, their daily hardships as they attempt to adjust to South Korean society as well as their struggle for repatriation. Through this intimate portrayal, Kim offers a penetrating insight into the tragic consequences of the Cold War that still persist in Korea. The film received the Freedom of Expression Award at the Sundance Film Festival 2004.

Kim Dong Won was born in 1955 in Seoul, South Korea. He graduated from Sogang University, majoring in mass communication, and has since worked as an assistant director and as a documentary filmmaker. In 1991, Kim founded the documentary film collective P.U.R.N. Production and has since produced and directed about thirty documentaries. He spoke with The Asia Society about the making of "Repatriation," his most recent documentary.

You have footage covering 12 years of your relationship with some of the North Korean ex-prisoners who settled in your village. Did your original plans for the documentary change once you had completed the film?

I never imagined I would make this kind of film. When I started filming there was no chance of repatriation for these ex-prisoners. I was just recording them and I wasn't sure what I was going to do with the footage. But later on there was news about possible reconcilation between the North and South and the possibility of repatriation. At that time I wanted my video to help their efforts at repatriation. But in the course of my filming, the 2000 summit between the two presidents Kim Dae Jung and Kim Jong Il concluded with the decision to allow repatriation. So I had to change the direction of my film, and the final result was more of a recollecting of my experience with these ex-prisoners.

How many hours of footage did you have by the end of your filming? What was your editing process like?

It was about 800 hours of footage. I edited it myself with my assistant director. It took two years for the editing, but it was not as difficult as I imagined. I knew the footage already and it was very fun to look at my past with them. It was good to see their faces again and so I enjoyed the editing process.

What made you feel so connected to these men’s stories and their desire to return home?

At first I didn't have much concern about their political problems. It was actually their faces that attracted me. Their faces and their way of talking were different from other grandpas in our community. Especially their eyes had a certain innocence, and so I was curious how they could be at their age and have such faces.

Your village seemed to welcome the ex-prisoners into their community without much difficulty. Was there any resistance? How do you think it would be different if it had been in Seoul?

Some did react negatively but these ex-prisoners were already old men and had come to our village for shelter. They did nothing in public so there wasn't such a big opposition. But there are more than 10 long-term ex-prisoners in Seoul. It was hard for them in the early '90s. They hid the fact that they were long-term prisoners, but I think when conditions started changing towards more reconciliation they began to adjust better.

After your own arrest, due to suspicions about your filming, did you approach your film differently?

The experience made me more brave. Before that experience, I felt sort of shameful. Many Korean activists think that if they have no experience in jail then it is hard to understand the political cause. At the time the thinking was that political prisoners were ordinary people and because the political situation was so upside down they were jailed. It created the ability to be even braver to fight.

The documentary reveals how these “un-converted” North Koreans stayed true to their beliefs even through years of torture and imprisonment. Why did you decide to take a more humanist approach rather than focusing the film just on ideology?

I saw a Palestinian film and it had nothing to do with the struggle with Israelis. It didn't even mention it. The director said that it was his intention to show that the lives of Palestinians are not always political and about this struggle. I think this is true. Even now the Iraqi people have their own lives. So the images of North Koreans that appear on TV news are showing only politicians and military. This is not reality. Even though there are differences, I think there are many more similarities among ordinary people in North Korea and South Korea.

What do you think the ex-prisoners learned by living among South Koreans for so long?

They don't think of South Koreans as enemies even though the political situation in South Korea was not kind to them. I heard that in North Korea these ex-prisoners are giving traveling lectures to talk about their South Korean experience. Not only are they talking about their time in jail, but also about after their release and the people who helped them.

You see in your film that many of the ex-prisoners who were born in South Korea are still ostracized by their families even after their release. Can you explain what these South Korean families of North Korean prisoners endured? Is it mainly fear that continued to separate them or is it still ideological conflict?

These relatives lived a very hard life. Some were also imprisoned just because they were related to these men or because they did not report them. Sometimes they were beaten by police. In earlier times, their houses were blocked with rope and anti-communist signs were posted in front of them. They sometimes could not get a job or get married. So I can understand their fears. But I think they are wrong to shut them out now because these ex-prisoners were not the people who did them wrong. It was the violence of the government at the time. But still they concetrate their fear and anger toward their relatives.

The documentary is also very powerful in capturing the men's repatriation to North Korea after so long. You reveal the complexity of the decision for those who chose to stay in South Korea as well as for those who return to the North. It makes the issue of reunification much more palpable. Though many struggled for years to go home, what do you think are some challenges they face now that they are back in North Korea?

The pain you also see in the men who did convert after torture and imprisonment is very striking. You mention in the film that now some converted ex-prisoners are seeking repatriation. What is the status of that effort?

The situation is worse than in the year 2000. But they still have strong hope to be repatriated. They protest in the streets and are at every rally. North Korea didn't call them "un-converted" prisoners before 2000 but now they call them "un-converted" because they were forced to convert. I am sure there will be a chance if there is progress in North-South Korean relations. This year is the 60th anniversary of our liberation and 5 years since the 2000 summit meeting. So they are appealing that issue for secondary repatriation. But the political situation is not good right now.

What has been the response to your film in South Korea?

We have done just small screenings because it is not a commerical film. It isn't so much because it is political but because it is a documentary. It received a mixture of reactions. These days we don't think so much of North Korea as our enemy. There isn't the same fear of North Korea and even some people feel they are our friends or brothers. My film was received positively in South Korea, but still some right-wing activists didn't like it and some leftists felt it didn't have enough political commentary. But the film critics did like the film very much.

Do you feel that younger generations in South Korea have a less urgent need to address reunification with North Korea or do you feel it is a growing concern?

You are doing screenings of your film at universities here in the US. What do you hope American audiences can learn after seeing your film?

My film is one of the many tragic stories of Korea. Our situation of a divided country has caused these tragic stories, not just in the past, but still today. We must be reunified. So I think America's role in Korea is important. American audiences must begin to think what would be the proper role for the US in our country. I also wanted to show how humane these men are through their stories. Those who have visited North Korea say that even though the officials are very rigid, the people are not.

Interview conducted by Cindy Yoon of The Asia Society.