Kashmir: 'A Corner of Hell' 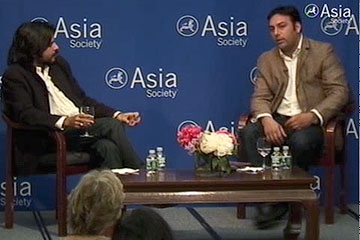 NEW YORK, April 12, 2010 - What is life like in Kashmir today, and what is the status of peace talks between India and Pakistan?

In a conversation with Indian journalist and critic Pankaj Mishra, author of Temptations of the West: How to Be Modern in India, Pakistan and Beyond, Peer gave his personal perspective on a widespread and brutal conflict that has claimed approximately 70,000 lives since its eruption in 1989.

"It is a corner of hell," said Peer in reference to the current political situation in Kashmir, before reading excerpts from Curfewed Night. Through stories from Peer's youth, the memoir depicts how profoundly the ongoing battle over Kashmir affects the lives of ordinary citizens living there. The author emphasized that despite India and Pakistan's attempts to restart the peace talks after the 2008 Bombay attacks, there has not been any progress and both countries have not come to an agreement that would put an end to their territorial dispute.

In fact, Peer predicts the situation is only likely to get worse in the future: "The headline that is often repeated in every South Asian newspaper today about Kashmir reads: 'Expect a Hot Summer.'"

In response to Mishra's question as to why America should be interested in Kashmir, Peer explained that the conflict is more than just a territorial disagreement—and there are fundamental human concerns, which the US can ill afford to ignore. Furthermore, he added, resolution of the Kashmir conflict would also be helpful in addressing the problems of instability not just in Afghanistan but the region as a whole.

Mishra and Peer agreed that one of the most pressing issues of the ongoing territorial battle between India and Pakistan is the new generation of Kashmiris who have grown up in the shadows of the insurgency, and are being recruited into mass militant movements. As Peer emphasized, continuing acts of violence and incitement to hatred are ultimately a dead end. He speculated, however, that resolving the territorial battle over Kashmir could potentially bring solutions to many other problems that India and Pakistan share.

Nevertheless, when an audience member asked Peer whether he saw any leader or organization on the horizon that could play a decisive role in reaching that resolution, he remained skeptical. "Things will not change unless both India and Pakistan and their political powers and population move forward."