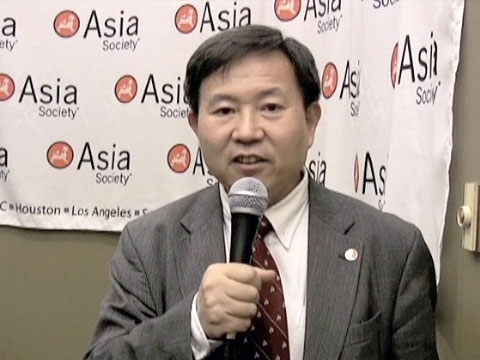 WASHINGTON, DC, March 10, 2011 — "That's me in the middle," said audience member Leo Orleans. Nanjing University professor Xu Xin, China's leading Judaic scholar, was displaying an old photo of Jewish children riding donkey taxis in Tianjin, a coastal city in northern China, during an enlightening discussion about the many historic Jewish communities in China at the Asia Society in Washington, DC.

Xu's interest in Jewish culture began in the late 1970s, when he was an English major at Nanjing University researching Jewish American literature. “I never thought I would go beyond literature," he said. "But in 1985 I met a Jew from Chicago and he invited me to teach at Chicago State University, and since it was my first time abroad, I was adopted by a Jewish family. And when you live with a Jewish family, you know what's happening.”

Xu, who was a Red Guard during the Cultural Revolution, sees Jewish models and traditions as a way to bring fresh ideas to the Chinese people on how to reform, modernize, and open the country. "From Jews I start to see those possible lessons for Chinese people who were struggling with modernization," he said. "That was way back 25 years ago. When I returned to China, I determined we need to tell China some new ideas, and I got them from Jews.”

Chinese Jewish history can be split into two distinct periods, before and after 1840. Before 1840, Jews came as guides along the Silk Road, and settled in Kaifeng, in Henan province, the capital of the Northern Song Dynasty (AD 960-1127). The Kaifeng Jewish community has mostly assimilated into the greater Chinese population. “Kaifeng Jews remained as Jewish descendents,” Xu said, “but they were not able to become a separate ethnic group because they did not keep the tradition very well.”

After 1840, the Jewish communities in China were populated by Westerners and were not assimilated into greater China. Three different events brought more than 40,000 European and Middle Eastern Jews to China: Colonialism, Russian pogroms and revolution, and the Holocaust. Shanghai was one of the few international cities to open its doors to Jewish refugees during World War II, so many Jews were able to settle there without obtaining a visa. After 1949, with the end of World War II and the start of China's Communist rule, most foreigners left China and headed back to the West.

Xu also explained that two prominent Jewish businessmen, David Sassoon and Ellis Kadoori, quite literally paved the way to modernizing Shanghai. The creation of Nanjing Road, the main shopping street of modern Shanghai, was originally funded by their company in the mid-1800s. Not only did it improve Shanghai's infrastructure, but also provided easier access to their multiple businesses in the area.

Today, nearly 10,000 Jews visit China annually for business, tourism, and studying, but all are Western. A small Chinese Jewish community in Kaifeng remains, but has yet to obtain official minority status in the eyes of the Chinese government. Several synagogues and other Jewish-built establishments from the late 19th and early 20th century are being rebuilt, including the Ohel Moshe Synagogue in Shanghai, which originally opened in 1927 and is now the Shanghai Jewish Refugee Museum.