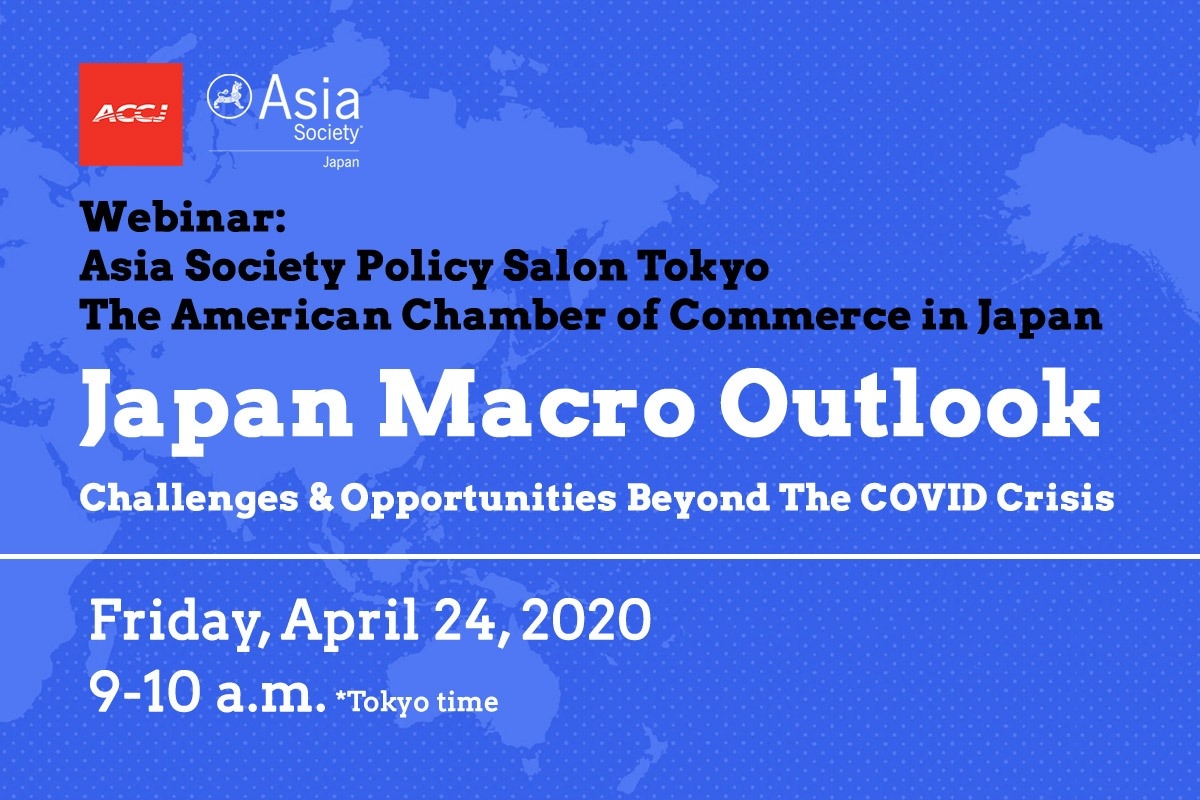 “Japan Macro Outlook – Challenges and Opportunities Beyond the COVID Crisis”

Mr. Koll began the panel discussion by setting the stage, introducing consensus expectations for major economies. He mentioned two points: 1) wide dispersion is observed in the growth forecasts, meaning that we are challenged with great uncertainties; and 2) while both the US and Japan will experience increases in unemployment, the incoming employment shock is expected to be smaller in Japan, and both countries will see their budget deficit double.

Mr. Feldman first discussed the difficulties in forecasting diseases, presenting how the actual number of COVID-19 cases in Japan spiked in late March, despite an improving trend in model predictions. He warned that although the recent weekly average of new cases currently appears to be decreasing, we need to be careful as the processes, such as human movement and cluster formation, generating the bell curve are very random. Therefore, contagion forecasts should be taken with a grain of salt and we should always question the underlying assumptions.

As for the economic outlook, an investor survey by Morgan Stanley showed that almost 50% of investors expected a return to GDP levels before the COVID-19 outbreak only in the second half of 2021. Morgan Stanley forecasts even slower recovery, as the first effective vaccine will only emerge in 12-18 months, until when social distancing will need to be observed. As Kevin Rudd, President of the Asia Society Policy Institute, noted in an earlier webinar, “when the loss can be large, ‘too much too early’ is better than ‘too little too late’.”

On the policy side, Mr. Feldman highlighted that fiscal policy interacts with the spread of the disease. He warned that although some US states are now seeking an early exit to social distancing, this option will consequently lead to slower recovery, as more activity will contribute to spreading the pandemic.

Turning to Japanese policy, Mr. Feldman highly valued the early announcement by Prime Minister Abe to shut down schools, the Prime Minister’s aggressive target to reduce interaction by 80%, Tokyo Governor Koike’s strong and effective statements asking people to stay home despite her lack of legal power to enforce these requests, and her getting the national government and surrounding prefectures on board. However, he called for an extended period of State of Emergency, more testing, including those for antibodies, and mitigating legal risk in healthcare.

Ms. Matsui discussed the market’s response to the crisis, recent lessons from China, and potential opportunities resulting from the COVID-19 crisis. The Japanese equity market collapsed by over 30% at its worst but has since retraced half of that decline, outperforming the rest of the world since March. This indicates that - at least in the investment community - the world is looking ahead.

Some lessons for Japan and rest of the world may be drawn from China’s experience. Much of China went into lockdown by late January, and most provinces saw new cases stabilize by mid-February. China then called for a reopening in low-risk areas in March, and there has been a gradual recovery in economic activity since then. The industrial sector has rebounded fairly quickly (for instance, Chinese steel production has returned to previous year levels), while consumer spending has been much slower, implying there is an uneven nature to recovery.

However, there is no major credit crunch as in the 2008-09 global financial crisis, and world governments are providing unprecedented levels of stimulus; therefore, once new infections stabilize and lockdowns relaxed, economic activity should gradually return. She shared her views on the next set of challenges beyond the defensive measures currently taken, including the need to stimulate final demand for both consumers and businesses.

In conclusion, Ms. Matsui highlighted potential opportunities arising from the pandemic. The crisis has turbo-boosted the need for IT and digital infrastructure for teleworking and education, specifically investments in cloud solutions, networks, data centers and cybersecurity. The pandemic has also accelerated the shift to e-commerce, the penetration rate of which has been lower in Japan (7% of total retail sales) compared with that in other countries (23% in China, 13% in the US).

She also noted that while we all hope to return to “normal,” there is great uncertainty about what the definition of a post-COVID-19 “new normal” will be, and companies are likely to become increasingly pressured to accelerate operational restructuring, M&A and industrial consolidation.

Mr. Koll pointed out that the global economic policy response to the pandemic has actually been well-coordinated and massive, very much in line with Kevin Rudd’s call for “bold, fast and big” action. However, traditional fiscal policy - public investment or tax cuts - accounts for barely 7% of the new measures; the vast majority is new programs designed to boost private purchasing power through income support, direct handouts, or zero-cost loans etc. A new financial socialism has been created, and the risks are high that a majority of people will become dependent on government spending and public grants for their livelihood. So when the pandemic ends, withdrawal from current stimulus programs will become a key new challenge.

A second point made by Mr. Koll was that we have not observed a currency shock in the current crisis, with major currencies stable and the Japanese yen rate remaining within the 105-110 yen band. This is an important stabilizer for corporate Japan and indicates that we are moving in the right direction of global coordination.

Mr. Koll’s third point was that the economic growth path is beginning to diverge. As China recovers while America contributes to struggle, Japanese corporations are facing a new challenge. With senior managers called back to Japan, many Japan headquarters now face difficulties in managing localized operations in China.

For PM Abe, balancing the trade-off between the economy and the pandemic has been the top priority, and Mr Koll notes that since the launch of Abenomics, the number of suicides reversed a two- decade uptrend and dropped rapidly as the economy improved; down to a three-decade low last year. Given the impact that economic well-being has on suicide and other ‘deaths of despair’, the “life versus livelihood” debate is expected to become more agitated as recessions deepen.

Mr Koll expects that COVID-19 will serve as a catalyst for new opportunities in e-government, healthcare, regional development (medical supercenters and R&D facilities), education, M&A, and more start-ups. Prime Minister Abe has mentioned two stages in fiscal support: first, immediate government support for crisis management; then, as the pandemics stabilizes, a second stage of longer-term incentives to create new investment opportunities. The second part is essential because simply returning to business as usual is unlikely to be the way forward, as Ms. Matsui also mentioned.

The initial comments by the three panelists were followed by a Q&A session, which covered issues such as the outlook of consumer spending, prospects for the Japanese equity market, how massive stimulus programs will be funded, including possibilities of higher taxes, corporate governance, and Japan-China relations amid Japanese government encouragement for companies to return to onshore operations. Final comments covered promising areas for immediate investment, including IT infrastructure in healthcare and education and the energy sector, where enhanced resilience will be important. The pandemic has broken entrenched business practices in Japan and has opened opportunities for change that Abenomics may have failed to incentivize.