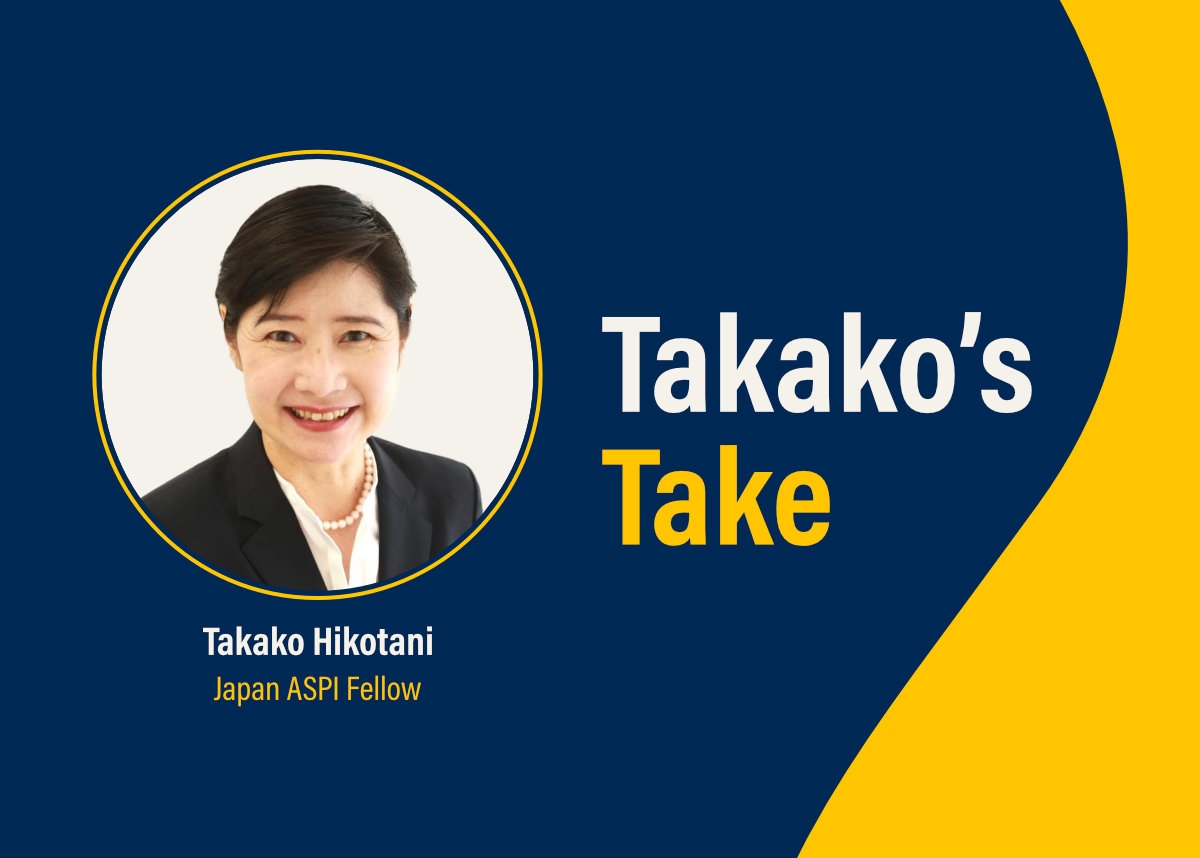 Starting this month, Japan ASPI Fellow will be publishing a monthly column, “Takako’s Take”. The column will cover a vast array of topics that is newsworthy as well as new developments in Japan’s public policy debate that will shed light from the ground.

Japan is finally waking up from its long COVID hibernation. And as we wake up, we face a war unravelling in Europe and an increasingly difficult security situation in Asia. The word VUCA: volatility, uncertainty, complexity, and ambiguity has been around for a while, but is more relevant than ever in describing the world than any time in the past 30 or so years.

What can we do, as leaders of various sectors in Japan amidst this challenging time? What is the role of Asia Society Japan? I believe that Vision, Understanding, Courage, and Adaptability; what HBS professor (Bill George) calls the leadership strategy for VUCA 2.0 should guide us on our way forward. Please let me explain the projects I have initiated since taking this position in January.

I have launched a new initiative which we call New Generation Scholars, a.k.a. the “young samurai.” We have selected 10 terrific candidates from top schools in Japan and the US, including Yale, Princeton, Todai, and Northwestern, in the fields of Economics, Political Science, and Sociology. Every one of the scholars are rising stars in the academia, but we hope to “nudge” them toward policy-related research so that they can provide us with new and fresh visions for Japan going forward. I hope you will have a chance to meet them during their term as fellows, and we ask you to look forward to the public presentation of their results, scheduled in Summer 2023.

One area where a deeper and broader understanding is acutely needed is the area of national security, or more simply war and peace. I have reached out to my network of friends from my 18 years teaching at the National Defense Academy of Japan and working for the Ministry of Defense and will launch the “Ask the General/Admiral” breakfast series. Modelled after the successful Ambassador’s breakfast, we will invite current and retired Admirals and Generals and ask them to offer us their real-time assessments of national security challenges Japan faces today, and more importantly, answer our questions. I am excited to announce that our first speaker will be General Shunji Izutsu, currently Chief of Staff of the Japan Air Self Defense Forces and that he will join us in June.

The community of policy and policy-related research think tanks and university affiliated institutions in Japan have expanded in the last 30 years, but it is still relatively insular, and not necessarily globally connected. Asia Society and ASPI are unique in their connectedness to the world by nature and their freedom from existing institutions in Japan. While we are small and new to the game, I would like to have the courage to speak out from our platform in a language accessible from around the world and to seek an impactful role in policy discussions connecting Japan and the world. In April, I will start publishing short essays on the Asia Society website. I will also be publishing in other international outlets, including a forthcoming article tentatively titled “What Ukraine means for Japan” in the web version of Foreign Affairs.

We will adapt to and build upon new initiatives spearheaded at Asia Society Policy Institute in New York. One recent initiative is the appointment of global fellows, including myself from Japan, Richard Maude in Australia, and Raja Mohan in India. Another new and exciting development on the home front is the International House of Japan’s merger with the Asia Pacific Initiative, Japan’s leading think tank. I look forward to discussing with James Kondo, Chairman of the International House of Japan, to brainstorm about ways in which we can adapt to the exciting new developments at the I-House.