Security Challenges in the Indo-Pacific: A JASDF Perspective (Recap) 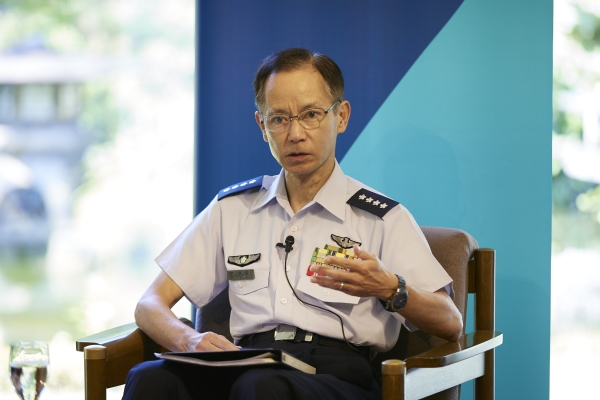 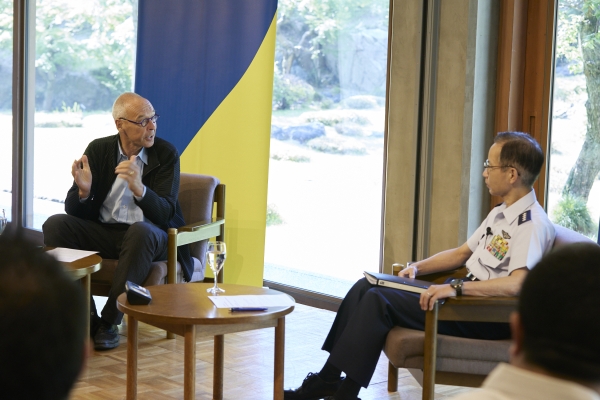 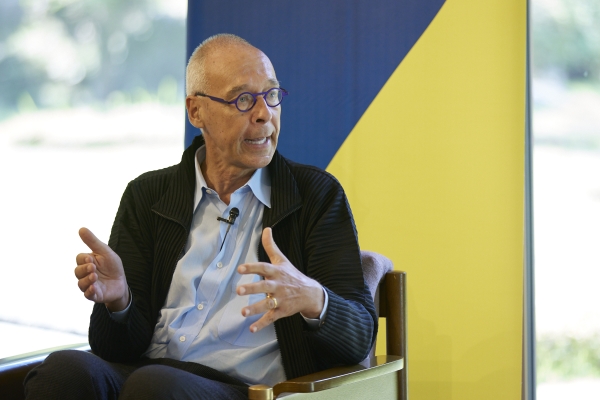 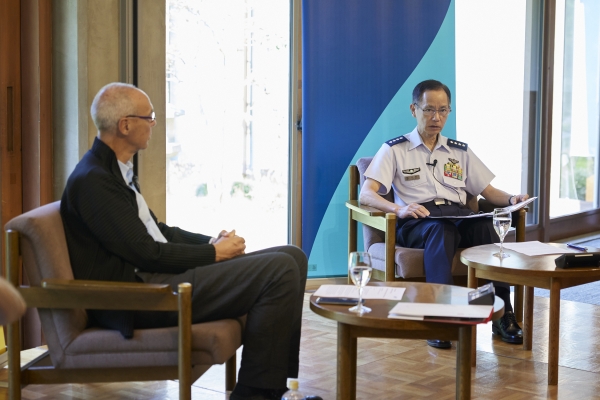 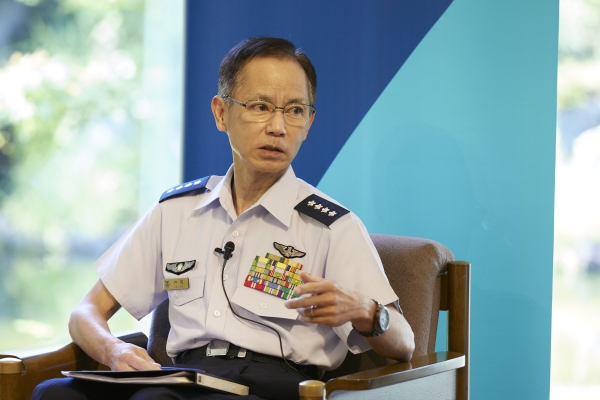 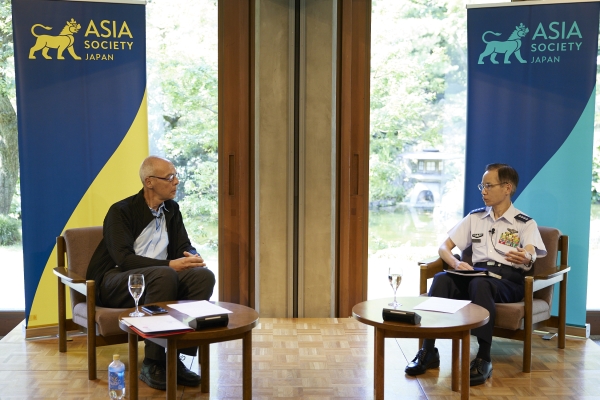 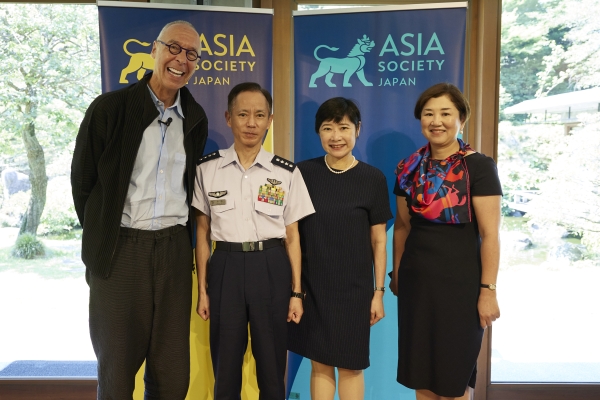 On July 1, 2022, Chief of Staff of the Japan Air Self Defense Force (JASDF), General IZUTSU Shunji joined Asia Society Policy Salon Tokyo to discuss the security challenges in the Indo-Pacific region from the JASDF’s perspective. He gave insights into the current conditions in the region as well as the future of JASDF in a fireside chat with Jesper Koll, chair of the policy committee at Asia Society Japan, and the audience on the floor and online.

Challenges in the international situation

The international security environment is changing at a much faster rate than we had ever assumed. It is becoming increasingly difficult to predict what will happen tomorrow.

The Russian aggression against Ukraine is a serious violation of international law. This change of the status quo by coercion has various implications ranging from its impact on the changing strategic structure of global security to tactical lessons for the military. Why deterrence did not function is likely to be a major point of argument going forward.

While circumstances in Europe and Asia are different, in the unstable environment of the gray zone situation, Japan needs to discuss how we can deter opponents that are willing to change the status quo by coercion. It also needs to keep a close watch on the evolution of Sino-Russian relations and how it will affect the defense of Japan.

Cooperation with countries that share universal security interests is essential. It will be important for Japan to demonstrate its firm will and ability to make deterrence function in the region based on the Japan-US alliance in cooperation with the Quad members and by encouraging the commitment of major European countries to the Asian Pacific regions.

Another factor that bears a major impact on national security is evolving technologies, such as AI and drones, as well as space and cyber technologies. Countries around the world are engaged in the research and development of these game-changing technologies today. Making private sector technologies available to the Self Defense Force will be key to its future development and capability. 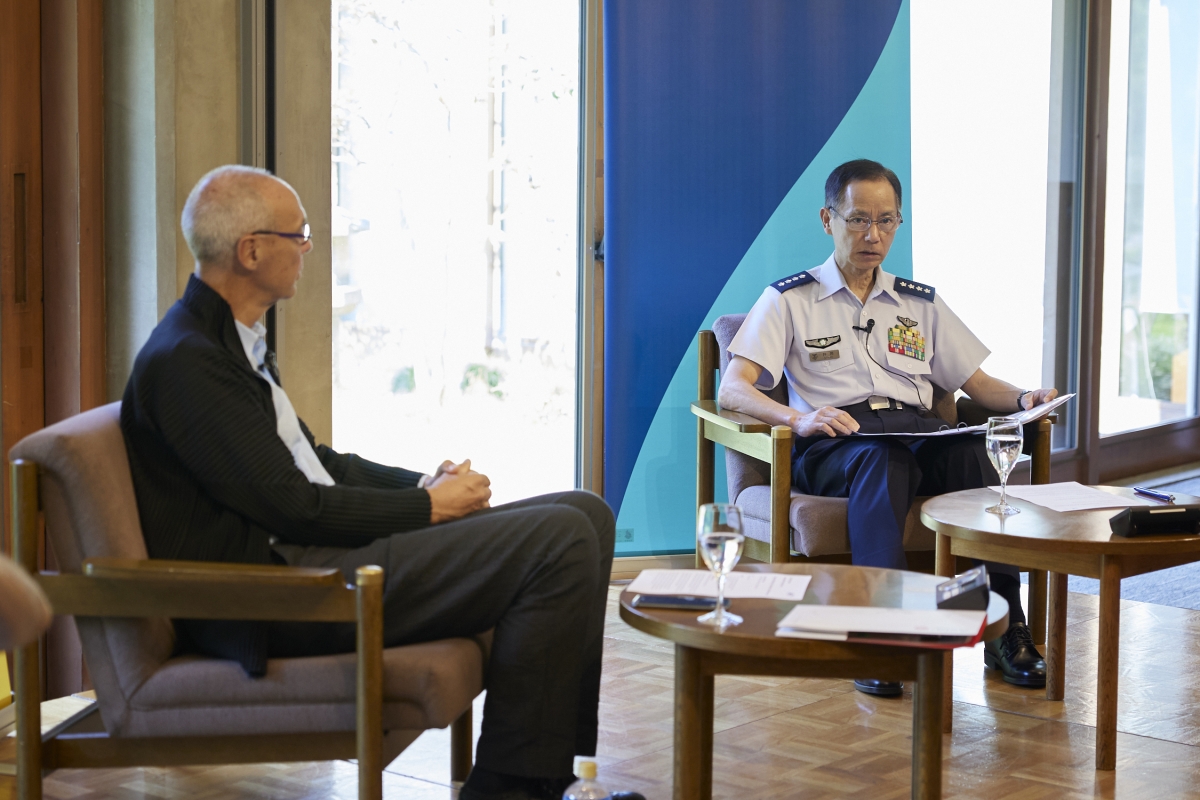 Changes in the situation around Japan

China seeks to become number one in the world both in name and reality through its long-term strategy. China has become particularly active in the East and South China Seas, including the waters around the Senkaku Islands. We are seeing increased activity using drones and other aircrafts. The need to respond to such air activity may increase in the future if China’s capability is further enhanced and they may become more active in the western Pacific. China’s activities are not limited to the air space but have been attempting to change the status quo in the maritime space as well. China will continue to build up its military with its overwhelming defense expenditure, which has increased by 42-fold over the past 30 years. China will strengthen the quality and quantity of its military power extensively and rapidly with a focus on nuclear and missile strategies, as well as their maritime and air power.

There is no doubt that it will invest considerable resources in the space, cyber, and electromagnetic domains and increasingly promote military-civil fusion to enhance its capabilities in intelligent warfare. Japan needs to strengthen military cooperation and deepen interoperability with U.S. forces and other allies to respond to China’s hybrid threat.

North Korea has become an increasingly serious and imminent threat to Japan with its growing missile activities. Their seventh nuclear test is also underway. At the Congress of the Korean Workers’ Party (KWP), North Korea announced the development of various weapons, including tactical nuclear weapons, nuclear submarines, and ICBM with solid fuel. North Korea has reportedly been cooperating with countries such as Iran, Syria, Pakistan, Myanmar, and Cuba in the arms trade and military technology transfers. It continues to be a major source of conventional weapons and items for the weapons for the mass destruction supply chain. In response to illicit activities such as ship-to-ship transfers prohibited under the UN Security Council Resolution, countries have been carrying out warning and surveillance activities deploying aircrafts and vessels to work on the Complete, Verifiable, and Irreversible Denuclearization (CVID) of North Korea.

In its National Security Strategy 2021, Russia perceives increased NATO activities to be a threat to its national security and aims to become a strong power. It is also promoting the modernization of its military equipment, including nuclear forces and hypersonic missiles. In the Far East, it is enhancing its military capability by promoting the Bastion Strategy to make the Sea of Okhotsk a sanctuary for SSBN and deploying fighter aircrafts and surface-to-ship missiles in the Northern Territories and the Kuril Islands. 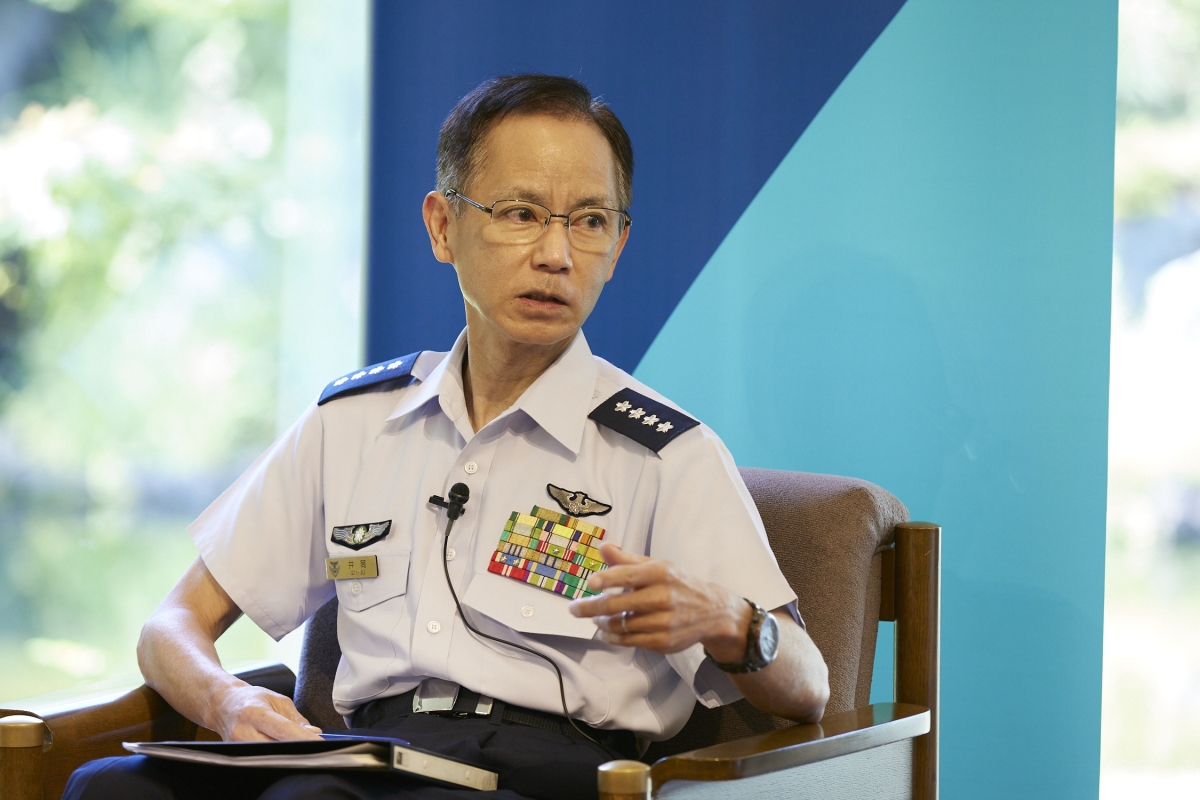 The Concept of “Shinka”

The Japan Air Self Defense Force (Koku-Jieitai) is working on three concepts of “Shinka.” First, it is focused on 進化 (evolution), or its commitment to move forward to make sure that the Japanese people enjoy stability in the sky and space now and in the future. Second, it is committed to the 深化 (deepening) of its existing functions and capabilities. The third “Shinka” is to demonstrate the 真価 (true value) of the Koku-Jieitai.

The Koku-Jieitai will contribute to the true integration of the ground, maritime, and air SDF. It is also committed to the integrated efforts of related ministries, industry, government, and academia to promote security by tying together diplomacy, information, military, and economy as a nation.

The Koku-Jieitai aims to promote the synergistic effect of five qualities: sharpness, multi-connectivity, agility, robustness, and tailorability (SMART) for future integrated operations in environments where the opponent is dominant in both quality and quantity. Its pursuit of effectiveness both in response and deterrence will be supported by SMART base, which includes the use of advanced technologies and outside resources to reduce manpower in operations, SMART logistics, and SMART education and training.

Congressman John Lewis once said, “Democracy is not a state. It is an act.” Democracy is not guaranteed. Likewise, peace and security are not a state and must be actively pursued. The Koku-Jieitai will move forward to pursue its activities in depth while it demonstrates its true value. 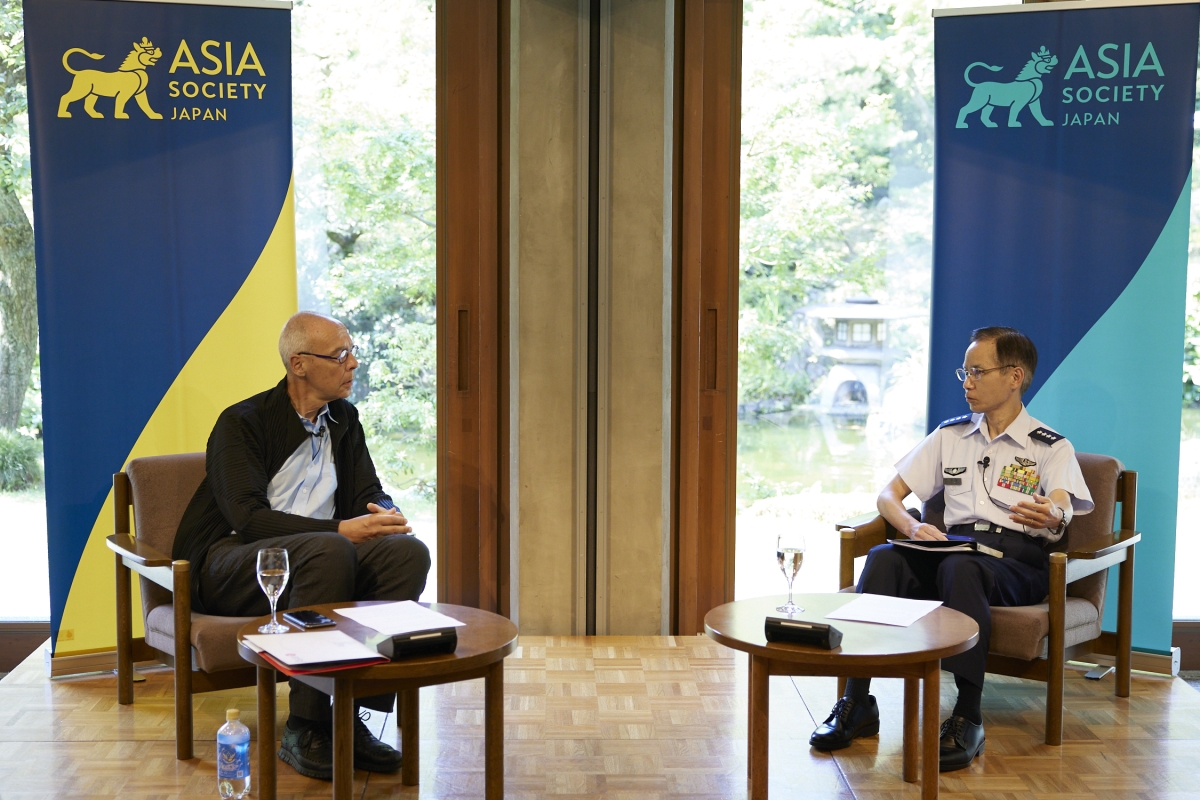 General Izutsu invited Mr. Koll (Co-Chair of the Policy Committee at Asia Society Japan) to call him by his call sign at the outset of their friendly conversation. Before taking questions from the floor, they discussed what the Koku-Jieitai needs to strengthen the credibility of deterrence, recruitment of personnel to the Koku-Jieitai, and the strengthened cooperation and coordination among the allies in the Indo-Pacific and areas requiring further efforts. The discussion with the audience took the conversation deeper into topics including what Japan can do to better support public funding for defense technologies. 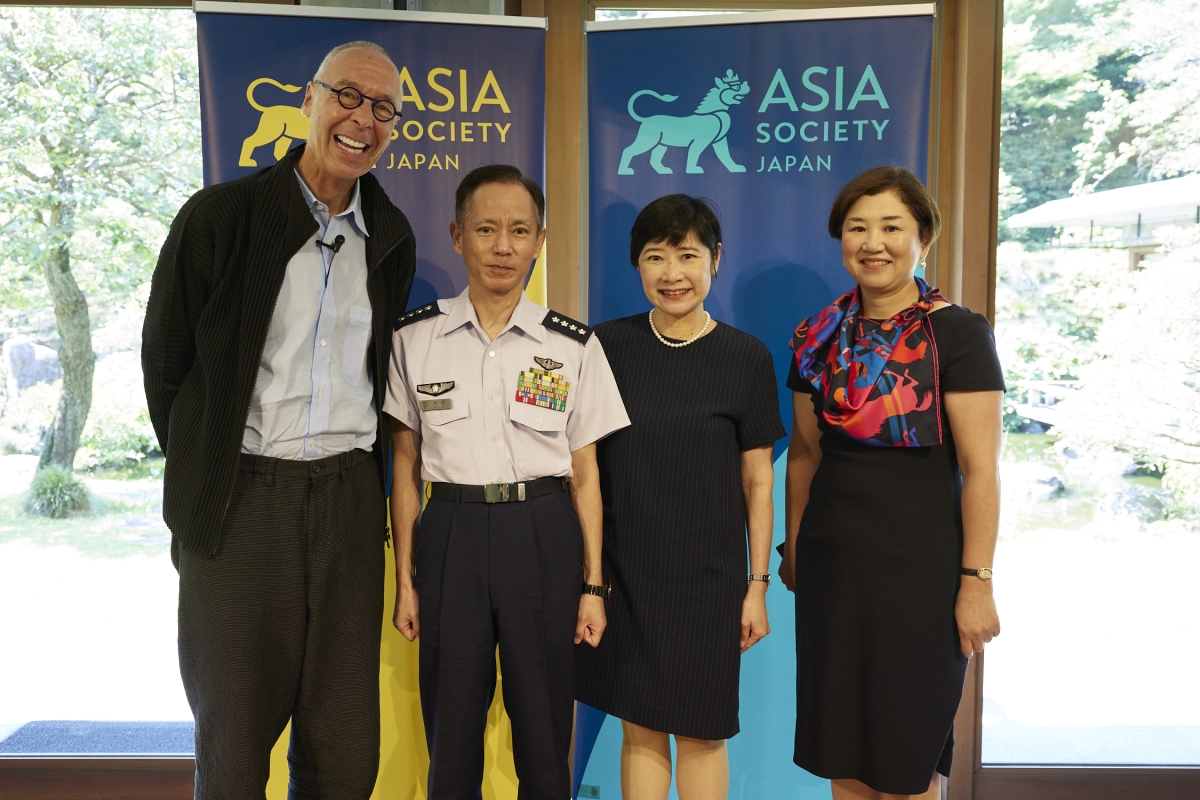