OIST Quantum/Cyber Security Initiative: The Science, the Opportunities, and the Real-World Challenge (Recap) 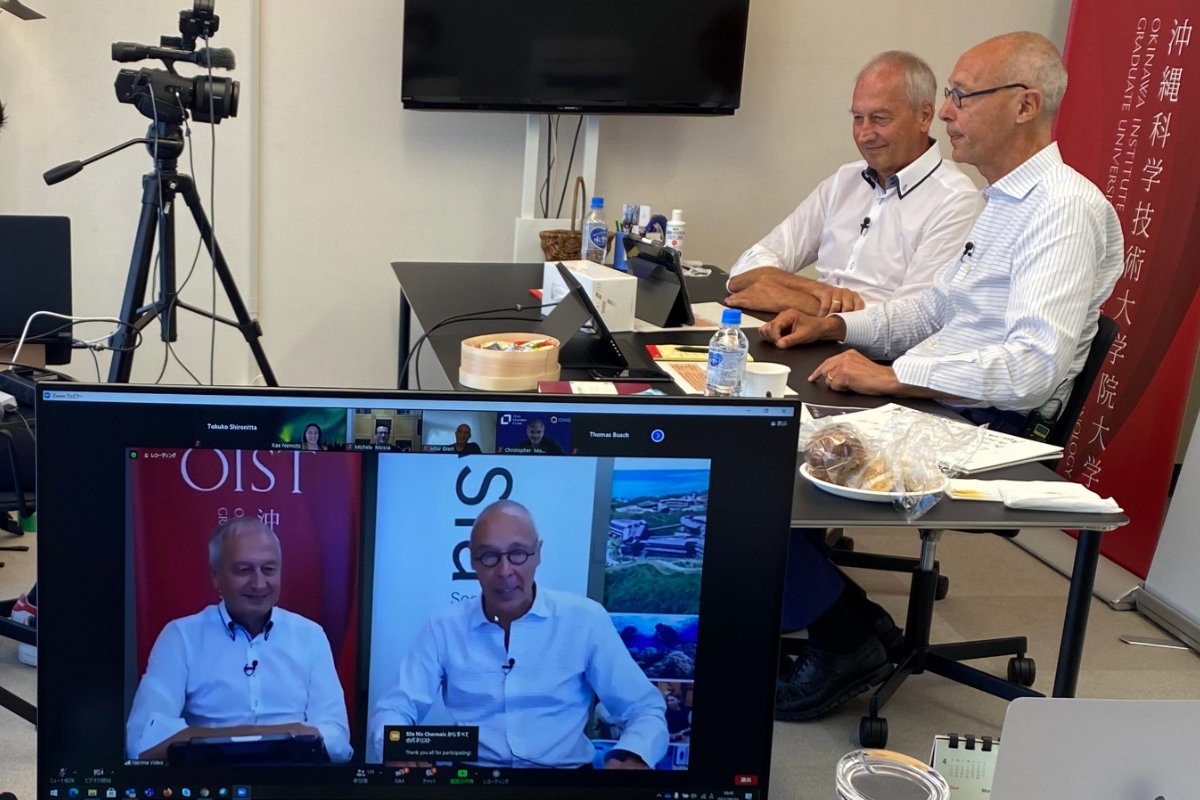 On June 1, 2021, Asia Society Japan Center and Okinawa Institute of Science and Technology (OIST) held an online seminar on quantum technology and its future impact on information security.

Three of the world’s most renowned quantum scientists led the audience through the world of quantum cryptography and computation and discussed its impact on existing encryption and cyber security:

It was moderated by Dr. Kae Nemoto, a professor from the National Institute of Informatics.

Watch the highlight video of the event below or the full session on OIST website.

Dr. Peter Gruss, President/CEO of Okinawa Institute of Science and Technology Graduate University, gave opening remarks. In our digital age, technology advances are growing exponentially. Technology has the power to inform or misinform our opinions, beliefs, biases and preferences, creating both exciting opportunities and significant challenges. In particular, quantum technologies offer enormous hope for transformative change. Quantum computers are expected to solve complex problems that today’s most powerful supercomputers cannot solve and never will. However, quantum computing may also pose some problems, as cryptographic protocols used today will become insecure once large-scale quantum computers are built. It is high time that we designed the next-generation of cryptographic protocols and organize the transition in our security infrastructure.

Japan is facing a talent shortage in quantum technology. OIST can help Japan become a frontrunner in the field. It seeks to become a focal point for the debate, not only among the science community but also with engineering and business world.

Introduction to Quantum Technology and its Impact on Information Security

Dr. Artur Ekert gave an Introduction to Quantum Technology and its Impact on Information Security. He talked about what to expect when we start interacting with quantum world and how it will impact the security of information. Marching toward the quantum world, every 18 months, microprocessors double in speed. In the drive for faster computing, the only way is to make things smaller in order to bring various components in a computing device closer to one another for faster communication. Thus, we are marching toward the level of molecules and atoms — the quantum world.

Quantum uses inherently different physics, and thus allows us not only to compute faster, but to achieve the impossible. He explained the concept of a quantum superposition using an experiment with beam splitters. Quantum superpositions can be a powerful tool, and this technology has been heralded as the second quantum revolution with enormous great impacts on privacy, precision and power.

Experimental Progress in Building Quantum Computers — Will they be here any time soon to threaten classical methods of encryption?

Dr. Christopher Monroe talked about Experimental Progress in Building Quantum Computers. Dr. Monroe began by introducing the quantum science and technology pillars: quantum computing, quantum simulation, quantum sensing, and quantum communication. A breakthrough in any pillar will have substantial impact on the other pillars. A quantum computer can factor numbers exponentially faster than classical computers. A quantum computer differs more than a laptop differs from an abacus, as the laws of computing are revolutionarily different. They will also look very different and do not need to be based on solid-state technology.

Various quantum technologies have been introduced to date. Natural platforms will need more control engineering and synthetic platforms will need surface science for maturity. A large amount of quantum bits and quantum gate operations are required to work towards the quantum advantage, which should take more than a decade. Quantum computing will mature in three phases. Three to five years will be spent on error reduction, ten or more years on error correction, and twenty or more years to build modular architecture.

What is the timeline for protecting existing cryptosystems from quantum?

Dr. Michele Mosca discussed how we can prepare for quantum technology. There is little we know about quantum computers, and how exponentially disruptive they can be; however, many sectors have begun to prepare themselves for the unpredictable future. One thing we know is that cryptography will be completely broken by hypothetical quantum computers. All of the digital platforms that we use worldwide in our critical infrastructure will be directly or indirectly affected.

Do we have to worry now? We have yet to know when fault-tolerant logical qubits will be available. Deploying conventional quantum-safe cryptography is a first step, which can later be combined with quantum cryptography. As we await national standards to be developed, we should start post-quantum planning and testing. We have seen advancements in developing large scale quantum communication networks. Once these technologies are mature, we will need to think about how to leverage them to make our digital platforms more secure and resilient.

No critical sector is immune from cyberattacks. We need to build greater resilience against cryptanalytic attacks. Quantum threat has motivated us to build a more resilient agile system, adding extra layers of defense, including quantum key distribution (QKD). If we wish to take immediate action, we should begin by putting someone in charge of producing a quantum readiness plan and provide them with broad executive support for the planning exercise. We should also engage other stakeholders, including relevant standards bodies and sectorial and cross-sectorial collaborations, update procurement policies and start engaging  with vendors.