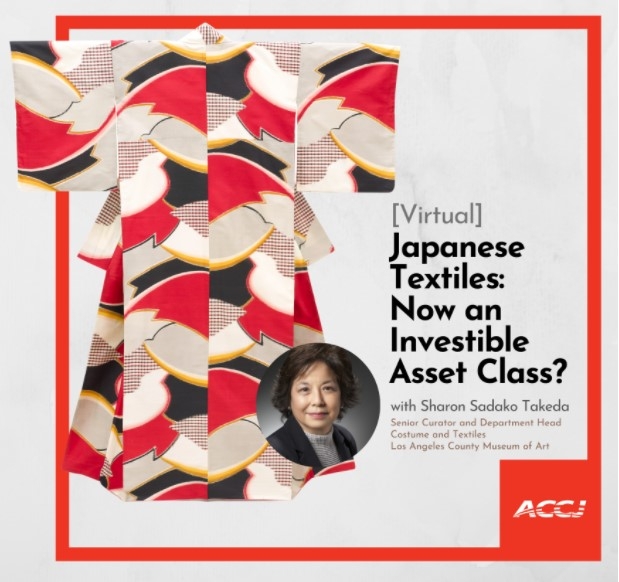 Ms. Sharon Takeda offered her comments on her career in art and how the LACMA collection has been accumulated.

Ms. Takeda was born into a third-generation Japanese-American family running a farm that produced walnuts, peaches, apricots and cotton in Hanford, California. Japanese culture was sprinkled into her childhood, being presented by her maternal grandmother the traditional doll collection for celebrating Girls’ Day in Japan and wearing a kimono to represent Japan at the annual “Christmas Around the World” program held at her grammar school.

Ms. Takeda grew up as a typical American child enjoying her family’s post war American dream. When she was at UCLA, she was shocked to learn for the first time that her parents had been among the 100 thousand Japanese-Americans who had been sent to internal relocation camps during WWII. Her parents had never mentioned this history to her as their desire was to move on. She concluded that this is how many Japanese-Americans lost their mother tongue, assimilating into the fabric of America, giving back to community and the church as model Americans.

Discovering art and art history in her liberal arts education at UCLA, she changed her major from pre-pharmacist to art and design. After graduation, she worked as a fashion illustrator in Los Angeles before she returned to UCLA for graduate school. She was a practicing fiber artist for a few years after earning her Master’s degree, but realizing that fiber art would never be recognized as “fine art” she switched to encaustic painting. Searching for what she wanted to express through her paintings, she fell into an identity crisis as a an artist and Asian.

She then decided to intensively learn Japanese and lived in Japan for two years as a research scholar funded by the Japanese Ministry of Education. Based at the Kanazawa University of Art she conducted field work in Niigata Prefecture on Echigo Jofu and Ojiya Chijimi, a traditional snow-bleached textile.

Upon returning to Los Angeles, she presented a paper on her research to a group of historians, including LACMA curators. She was invited to volunteer in the Costume and Textile department where her first assignment was cataloguing Indonesian textiles. Soon after she started volunteering the then associate curator of textile at the Tokyo National Museum visited LACMA, and Ms. Takeda gained the opportunity to review LACMA’s collection of historic Japanese textiles. She had always been drawn to the Mingei movement in Japan, but found that LACMA’s collection was dominated by high-class silk textiles and dress collected by wealthy patrons.

Following her first art exhibition, she curated “The Fabric of Life: Japanese Folk Textiles,” an exhibition examining textiles exemplifying the philosophy of the Mingei movement led by Yanagi Soetsu, and demonstrated how craftspeople worked anonymously to adorn everyday objects. Her next exhibition was another award-winning international loan show “Miracles & Mischief: Noh and Kyogen Theater in Japan.”

With the announcement of Michael Goven becoming LACMA’s contemporary art director, Ms. Takeda decided to organize “Breaking the Mode: Contemporary Fashion from the Permanent Collection.” The exhibition highlighted designers, including Rei Kawakubo, Yohji Yamamoto and Issey Miyake, who since the late 1970s have revolutionized methods of garment construction or challenged the existing canons of body form.

Michael Goven encouraged LACMA curators to make newsworthy acquisitions to further build its collection. “Fashioning Fashion: European Dress in Detail, 1700-1915,” celebrating the museum's groundbreaking acquisition of a major collection of European garments and accessories, was one of three inaugural exhibitions that opened the Lynda and Stewart Resnick Exhibition Pavilion. The exhibition traveled to Europe and its catalogue remains a best-seller often used as a textbook. The same collection, which also covered three centuries men’s garments, allowed the organization of another award-winning exhibition “Reigning Men: Fashion in Menswear 1715-2015,” for which the museum expanded the collection to fill the gaps.

In 2014, she opened “Kimono for a Modern Age” showcasing 36 modern kimonos from LACMA’s Permanent Collection that focused on the cross-cultural enrichment of fashion, art design and technology between Japan and the West after the Edo period. The ways that Japanese artists capture the beauty and power of nature with simple stylized line or form inspired Western artists and informed Western art movements, such as the Art Deco movement. The exhibition also showed hints of Miro and Matisse’s influence on Meisen kimono.

Building on the Strengths of the Permanent Collection

When Japanese warlords’ households were dismantled in the Meiji Restoration, their possessions became available on the antique market and eventually moved into the hands of dealers like Shojiro Nomura and ultimately into the hands of European dealers who sold them to collectors and artists.

Unlike their counterparts on the East Coast, with collections built over a century based on those of philanthropic families, LACMA has no acquisition endowments, and therefore works hard to procure money for acquisitions. Before the pandemic, LACMA held an annual Collector’s Committee Weekend in April to purchase objects selected by LACMA’s curators. Each curator would be given five minutes to present why the selected piece should be added to the collection. Membership dues and extra money raised by auctioning pieces donated for the event would be pooled, and the piece with the first majority of votes would be bought. The process would be repeated until the pot was empty. Often, some trustees and committee members would purchase a piece before the auction, and all items on the list would be acquired during the weekend.

Ms. Takeda concluded her comments with an introduction of the works of “yuzen” kimono designers Moriguchi Kako and Kunihiko. Moriguchi Kunihiko’s “The Gradation of Triangular Petals,” was recently exhibited at his career retrospective at the National Museum of Modern Art in Kyoto. LACMA had acquired the kimono prior to his joining his father as a living national treasure in 2007. His father, Moriguchi Kako, was designated a Living National Treasure in 1967 for mastering and revitalizing the three-hundred year tradition of “yuzen” paste-resist dyeing by developing the “makinori” scattered resist technique.

Ms. Takeda is currently working on the retrospective of Sudo Reiko scheduled for 2023 and she is likely to treat the windows of LACMA’s new building to debut in 2024 with her Japanese paperwork.