[Leaders Shaping the Future of the Indo-Pacific] The #MeToo Movement in Asia: How Can We Fight Against Sexual Violence? | Asia Society Skip to main content 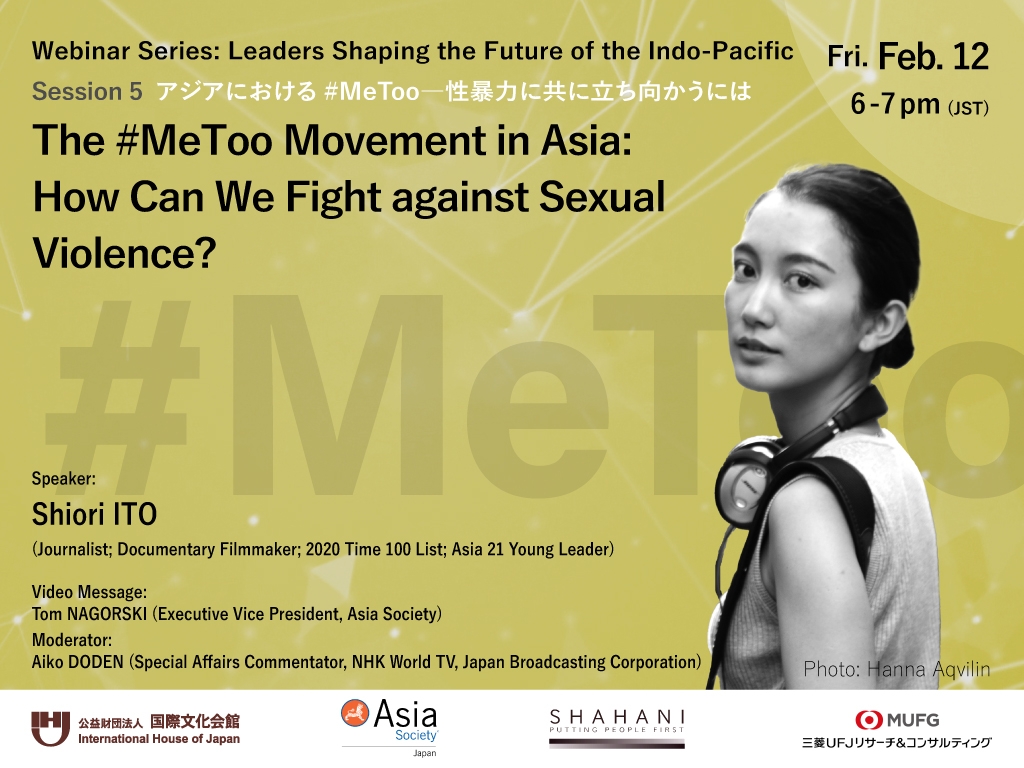 Ever since the #MeToo movement started in the United States, thousands of women across the world have come forward and joined the movement, telling their own stories. Asia was no exception; the movement has picked up momentum and developed in its own particular way. Yet, there are innumerable victims who are unable to speak up because of their fear of secondary victimization through the insensitive, victim-blaming attitude of third parties and false rumors spread on social media, as well as discrimination and sanctions imposed by traditionally patriarchal societies.

Goal 5 of the United Nation’s Sustainable Development Goals (SDGs) includes the elimination of all forms of violence against women and girls, but how can Asia join hands in attaining this goal? Shiori Ito, who was cited as one of the 100 most influential people in the world by Time magazine in 2020 for her contribution to Japan’s #MeToo movement, will share her insights.

He joined the Asia Society following a three-decade career in journalism — having served most recently as Managing Editor for International Coverage at ABC News.

Shiori Ito is a journalist, writer, and documentary filmmaker. Her primary focus is gender-based human rights issues. At the 2018 New York Festivals, Ito won a silver award for the film she directed, Lonely Death, in the Social Issues category. In 2017, she published the nonfiction book Black Box based upon her own experience of rape. The book reveals the sexism in Japanese society and institutions, and was awarded the Free Press Association of Japan Award for Best Journalism in 2018. Black Box is now available in Japanese, Chinese, French, Korean, and Swedish. For her contribution to Japan’s #MeToo movement, she was listed as one of the 100 most influential people in the world by Time magazine in 2020. She was also selected for Newsweek’s The Most Respected Japanese 100 in 2019. She is now developing her first feature documentary.

Aiko Doden has expertise in reporting on a wide range of global issues from hard security to human security. As a commentator, she covers Southeast Asia, Japan-US relations and Japan’s foreign policy. Doden is a popular face on TV, having anchored key news programs such as NHK Good Morning Japan, NHK News at 9 PM, NHK World Network, and NHK Asian Voices. She was a correspondent based in Thailand extensively covering ASEAN countries. She holds an MA from Columbia University and translated I Am Malala: How One Girl Stood Up for Education and Changed the World into Japanese (Iwanami Shoten, 2014). She has served as Trustee at the International House of Japan since 2018.

*The webinar series Leaders Shaping the Future of the Indo-Pacific was launched in January 2021 with the aim to “contribute actively to future peace and coexistence in the Indo-Pacific by strengthening networks in the region.” Since Covid-19 became a global pandemic, there has been a concern that the continuing restrictions on the movement of individuals may strengthen the global trends of anti-globalism, nationalism, and racism, which can result in a growing sense of division among people. Cooperation and solidarity across Asia as a whole are all the more important in order for us to recreate a world that instead connects people. In this webinar series, we will invite leaders and experts from the Indo-Pacific region as speakers to share knowledge and insights with others and to examine the current challenges accentuated by Covid-19 through various perspectives such as governance, education, diversity, the smart city, and architecture. From there we will explore how we can cooperate and stand together in these unprecedented times.

Click for directions
Register Now
20210212T180000 20210212T190000 America/New_York Asia Society: [Leaders Shaping the Future of the Indo-Pacific] The #MeToo Movement in Asia: How Can We Fight Against Sexual Violence? Shiori Ito, cited as one of the 100 most influential people in the world by Time magazine in 2020 for her contribution to Japan’s #MeToo movement and 2019 Asia 21 Young Leader will join us this week to share her insights.