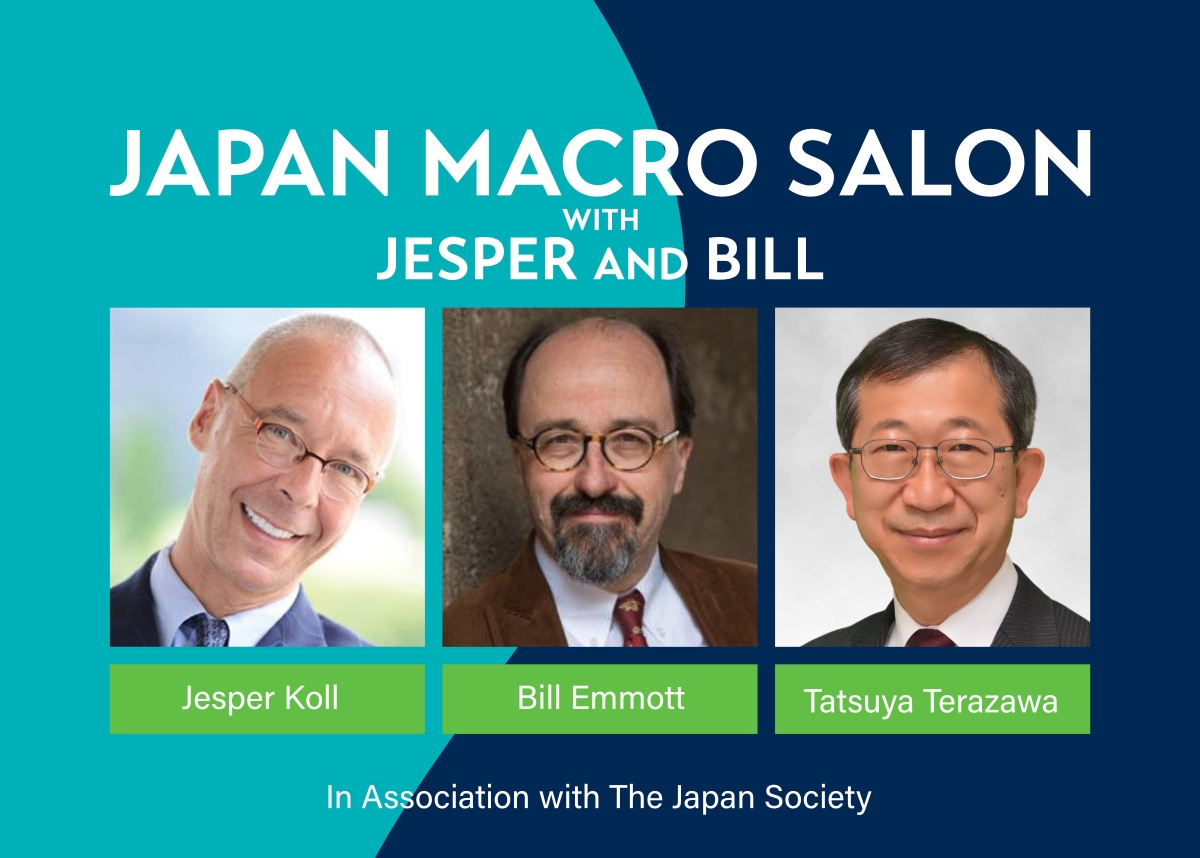 Join us for the second in our new regular quarterly webinar on business and current affairs, Japan Macro Salon with Jesper and Bill in which The Japan Society’s chairman Bill Emmott teams up with Jesper Koll, a longtime Tokyo resident and one of the most keenly watched economists and investment strategists in that town, to discuss what's new in the Japanese economy, business, financial markets, and more.

Each quarter, Jesper and Bill open with a conversation about the latest trends that have caught their attention and then welcome a special guest to focus on a topic of the moment. All the while, they will be interacting with questions from the audience. These webinars are run in association with The Japan Society.

In this session, we are delighted to welcome as our special guest Tatsuya Terazawa, chairman of the Institute of Energy Economics, Japan (IEEJ). In his message on taking up the role in July 2021, Mr. Terazawa noted “Energy and climate change issues are two sides of the same coin. Applying the guiding policy principle of 3Es plus S—energy security, economic efficiency, and environmental conservation plus safety, Japan is facing a very urgent need to find a realistic pathway to carbon neutrality”.

This need has only become more urgent as we all grapple with the current global energy crisis, while not forgetting agreed carbon emissions reduction targets. With Tatsuya Terazawa’s help, Jesper and Bill will unpick Prime Minister Kishida’s announcement of plans to restart existing nuclear reactors and consider a new building program for next-generation reactors, alongside policies for the expansion of the development of storage batteries and promotion of renewable sources such as offshore wind.

Jesper Koll
Jesper Koll has been researching and investing in Japan since becoming a resident in 1986. Over the past two decades, Jesper has been consistently recognized as one of the top Japan strategists/economists, having worked as Chief Strategist and Head of Research for U.S. investment banks J.P. Morgan and Merrill Lynch. He currently serves as Expert Director for the Monex Group and the Japan Catalyst Fund (Japan’s 1st retail investor based corporate engagement/activist fund). His analysis and insights have earned him a position on several Japanese government and corporate advisory committees, including Tokyo Governor Yuriko Koike’s Advisory Board. Jesper serves as Board Director of OIST, the Okinawa Institute for Science and Technology and is a Founder and Board Director of the Asia Society Japan and heads their Policy Committee. He is one of the few non-Japanese members of the Keizai Doyukai, the Japan Association of Corporate Executives; and serves on the board of several Japan-based start-ups. He has written three books in Japanese and, in 2021, created the acclaimed video/podcast series Japan - Capitalism that works. Jesper is an economist, angel-investor, patron; and yes, a Japan Optimist.

Tatsuya Terazawa
Tatsuya Terazawa is Chairman and CEO of the Institute of Energy Economics, Japan (IEEJ). Previous to this he served as Senior Advisor the the Cabinet Office on Covid-19 response measures and the formulation of the Growth Strategy including Japan’s version of the ‘Green New Deal’.  He served as Vice Minister for International Affairs at the Ministry of Economy, Trade and Industry (METI) until July 2019, leading METI’s international policy operation and cross-border economic dialogues including on the broader use of hydrogen. I advised then Prime Minister Shinzo Abe on industrial and energy policy. He played a senior role in coordinating the communique, including on trade and global climate change issues, for the 2019 G20 Osaka Summit, and led negotiations on behalf of the Japanese Government before the 2015 COP21 meeting in Paris.

Bill Emmott
Bill Emmott is an independent writer, lecturer and consultant on international affairs. He is a Fellow of Tokyo College, University of Tokyo’s new interdisciplinary research institute, and was a Visiting Fellow at All Souls College, Oxford in 2017-18. He also chairs the boards of Trinity College Dublin’s Long Room Hub Research Institute for the Arts & Humanities, and of the International Institute for Strategic Studies in London.

He was previously the Editor-in-Chief of The Economist (1993-2006) and has written eight books on Japan, the first of which was The Sun Also Sets: Why Japan Will Not Be Number One (1989). His latest was Japan's Far More Female Future, which was published in Japanese by Nikkei in 2019 and in English by Oxford University ress in 2020. He has also published books about Italy, the future of the West and the lessons of the 20th Century, has narrated and co-written a documentary film about Italy, Girlfriend in a Coma (2013) and was executive producer of a film about Europe, The Great European Disaster Movie (2015).

In 2016 the Japanese government awarded him the “Order of the Rising Sun: Gold Rays with Neck Ribbon” for services to UK-Japan relations.

Bill Emmott was chairman of the trustees of the London Library from 2009-15; was group economic adviser for Stonehage Fleming in 2011-15; and served on All Nippon Airways’ UK Advisory Panel until 2016 and Swiss Re’s panel of advisers from 2006-19. He is a member of the Global Advisory Board of the University of Tokyo; and a member of the senior advisory panel of Critical Resource, a consultancy.

Born in 1956, Bill is married to Carol. They live in Oxford and Dublin with their three dogs. Bill has been a member of the Japan Society since 2005 and an individual benefactor since 2013, as well as having frequently addressed society events as a speaker since the early 1990s.