Capitalism Made in Japan | Asia Society Skip to main content

Capitalism Made in Japan 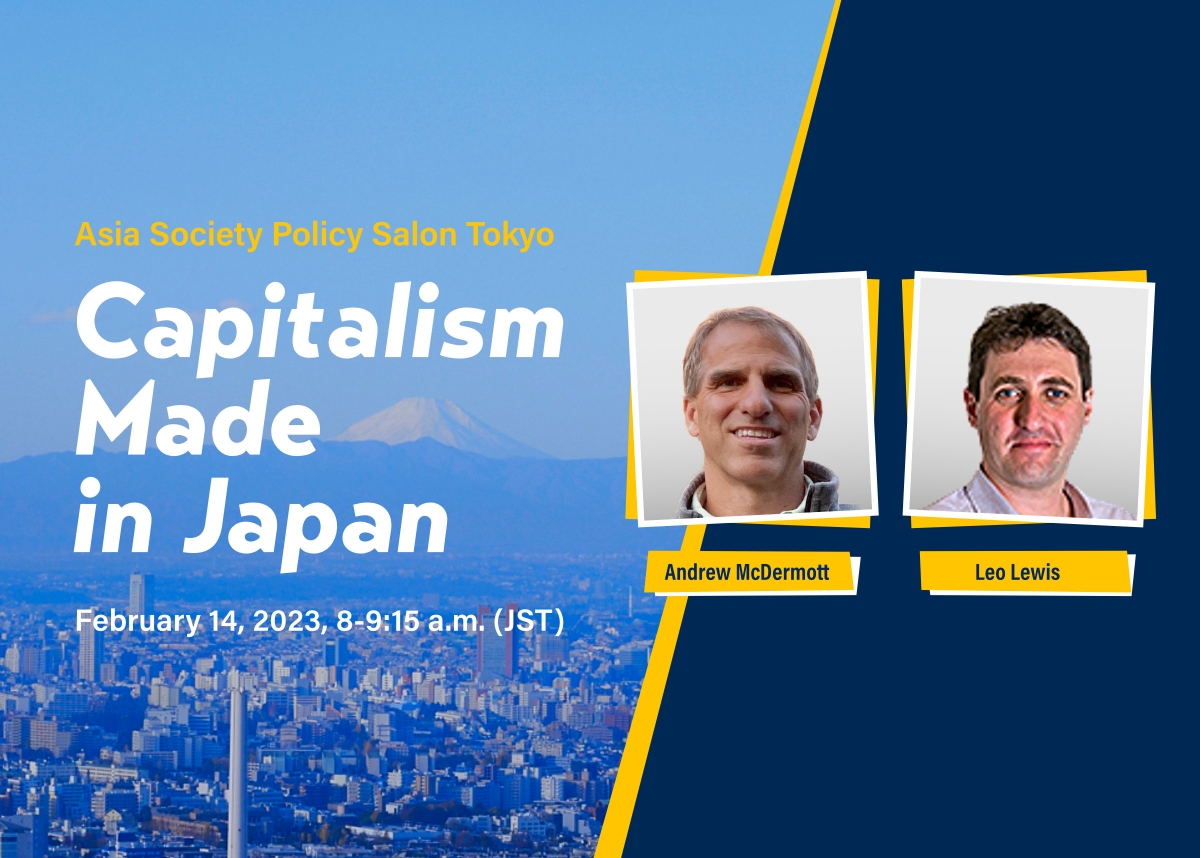 What if the common knowledge about Japanese public companies is wrong? What if Japanese managers are actually better prepared to face today's problems than their American or Chinese counterparts? Could it be that US-style Private Equity is the wrong solution for the actually well-functioning, multi-stakeholder system made-in-Japan capitalism has built and sustained?

Join us for the first session of a new series where we aim to explore Japan’s place in the emerging global order in general and the global quest for a more sustainable economic model in particular. By featuring doers and thinkers, practitioners, stakeholders, and rule-makers, we aim to stimulate debate to uncover both the good and the bad sides of Capitalism Made in Japan.

The first session will feature the long-term Japan investor Andrew McDermott and the influential Japan financial journalist Leo Lewis, moderated by Japan economy polymath Jesper Koll. The lively discussion will explicitly address the differences between the Japan described in the financial media narrative and practitioners’ actual experiences over the past thirty years.

Challenging common perceptions and dominant narratives is not supposed to be easy, but Japan has an important role to play in the coming decades. Subsequent sessions will address Japan’s energy, education, defense, and monetary and fiscal policies.

The Asia Society believes the time has come to talk seriously about issues that have been avoided or overlooked by the stale “Lost Decades” narrative. Broadening the lens through which we view Japan to include its successes as well as its failures could lead to a better partnership with Japan and to peaceful solutions to the broader problems facing the world.

Andrew McDermott
After graduating from Princeton with a history degree, Andrew joined NEC Logistics in Tokyo in 1992. In 1994 he fell into a finance career courtesy of JPMorgan, where he worked on deals ranging from Chinese infrastructure finance to venture capital to tech IPOs in Hong Kong, Singapore and San Francisco. He joined Southeastern Asset Management in 1998 and helped leads its international business until 2009. He founded Mission Value Partners in 2010. MVP manages a global equity portfolio that is currently 100% invested in Japan.

Over his career, Andrew and his partners have participated in over sixty “activitist” events across the US, Japan and Europe. He was personally involved in several early Japanese cases, including Nippon Broadcasting, Tokyo Style, Nikko Cordial, Olympus and NipponKoa/Sompo.

His experience has been mixed. After two decades of calling for increased activism and private equity engagement, he views the current wave of activity with ambivalence and finds much to admire in the quiet competence of the Japanese managers with who he has partnered.

Leo Lewis
Leo Lewis is the Financial Times’ Tokyo Asia Business Editor, and has lived in Japan since 2015.
He covers financial markets, investment, banking and a broad sweep of Japanese industry from the largest corporate names to the microcap stocks that form the backbone of the country’s SME economy.

He has a regular column on Mondays and Thursdays, covering various aspects of Japanese and Asian business.