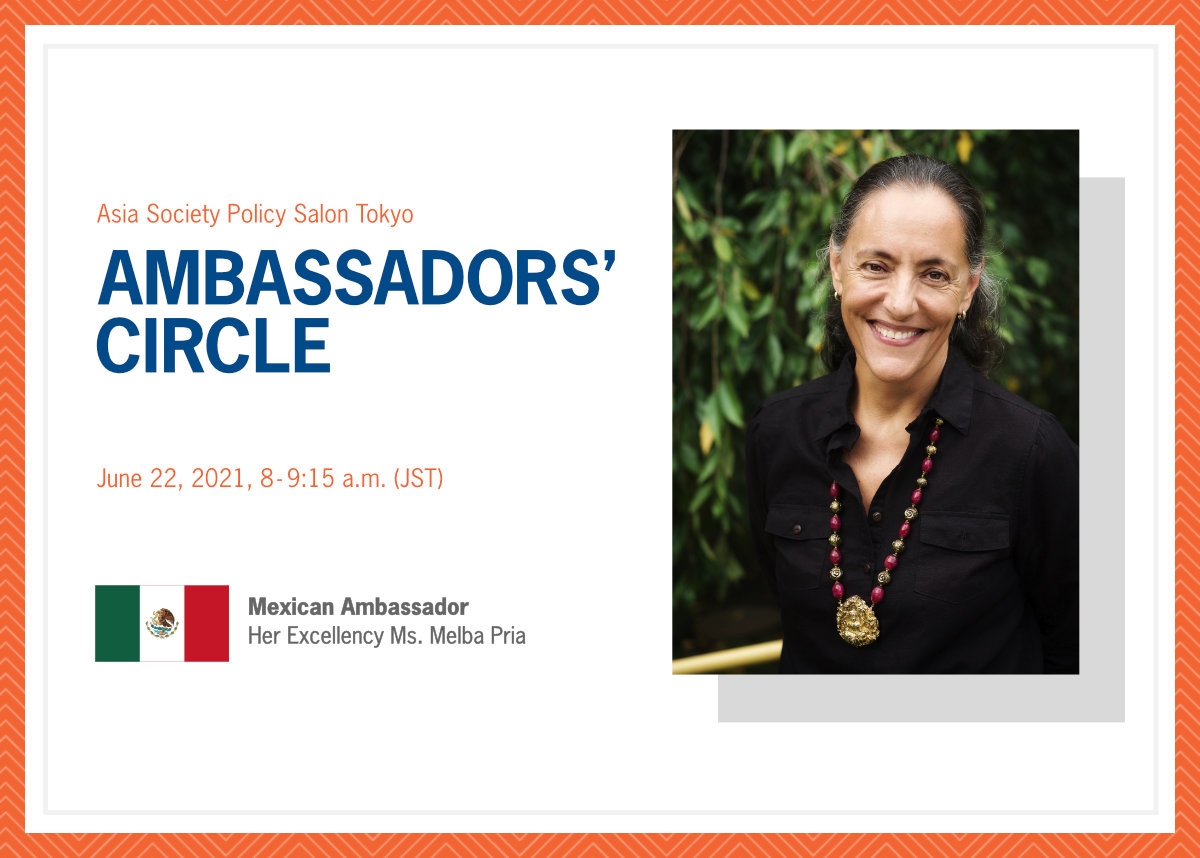 Asia Society Japan Center is honored to welcome Her Excellency Ms. Melba Pría Ambassador Extraordinary and Plenipotentiary of the United Mexican States to the June Ambassadors’ Circle.  Since taking her post in June 2019, Ambassador Pría has aimed to go, “wider and deeper” as Mexico’s official envoy to Japan.  Further strengthening economic and cultural ties but also focus on championing widespread inclusion, gender equality and strengthening public policy in Mexico and abroad.

Prior to her posting in Japan, Ambassador Pría was Ambassador of Mexico to India, where within her diplomatic circles she was popular as “the ambassador with the auto-rickshaw”.  Ambassador Pría knows how to think out of the box and creativity navigate for the best outcome.  We look forward to hearing how she has had to adapt to Covid-19 but how she sees the partnerships between Mexico and Japanese develop further.

Asia Society Japan Center’s “Ambassadors’ Circle”, is an initiative launched last year to forge deeper links and stimulate exchange between our Founding Members and Tokyo-based Ambassadors.  In these turbulent times, a first-hand understanding of how different countries and their leaders interpret the evolving challenges in Asia in general, the US-China dynamics in particular, is more important than ever. The “Ambassadors’ Circle” aims to involve you in this mission.

Jesper Koll will moderate a “fireside chat” followed by audience participation in the debate. Don’t miss this exclusive opportunity to learn how major powers are adapting national strategies to shape our future.

Ambassador Extraordinary and Plenipotentiary of the United Mexican States

A professional public official for 40 years, the main themes of her work are embracing political and developmental objectives that focus on and address issues relating to poverty, identity and tolerance, marginalized and ethnically differentiated communities. At the Secretary of Foreign Affairs, she has been appointed Ambassador to India (2015-2019) and to Indonesia (2007-2015). She also has been Head for Public Diplomacy, Director-General for the Mexican Diaspora and Liaison between the Secretary and local governments for International affairs. Prior to the above roles with the Ministry of Foreign Affairs, she was political and consular attaché at the Mexican Embassy in Israel and later advisor to the Foreign Minister.