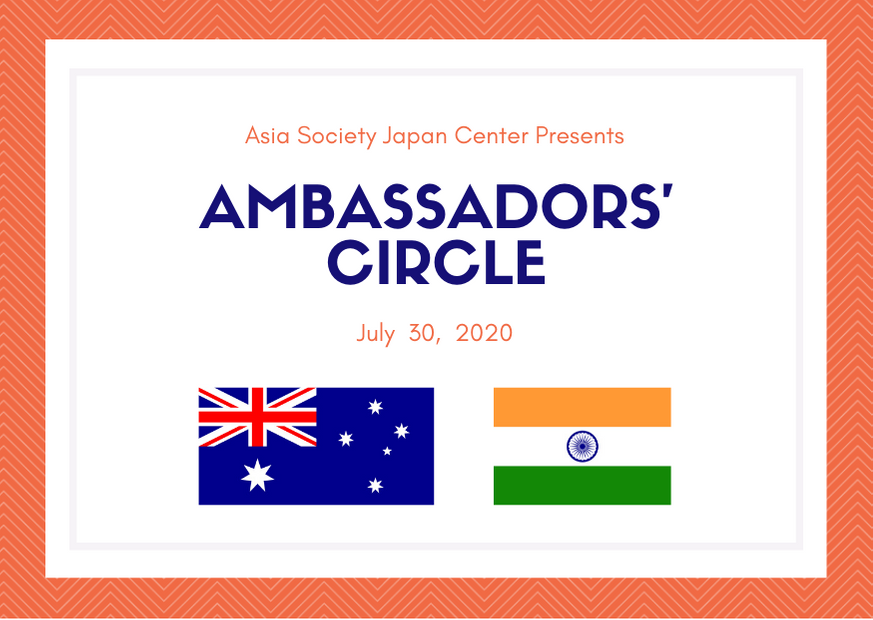 The Asia Society Japan Center is proud to invite you to our inaugural “Ambassadors’ Circle”,  a new initiative to forge deeper links and stimulate exchange between our Founding Members and Tokyo-based Ambassadors of Asian countries.  In these turbulent times, a first-hand understanding of how different countries and their leaders interpret the evolving challenges in Asia in general, the US-China dynamics in particular, is more important than ever. The “Ambassadors’ Circle” aims to involve you in this mission.

For our first session, we are honored to present the Ambassadors of Australia and India, The Hon. Richard Court AC, Ambassador of Australia to Japan, Sanjay Kumar Verma, Ambassador of India to Japan. Jesper Koll will moderate a “fireside chat” followed by audience participation in the debate. Don’t miss this exclusive opportunity to learn how two of the major powers in Asia are adapting national strategies to shape Asia’s future.

Mr Richard Court arrived in Japan in February 2017.
Mr Court is a former Western Australian politician who has held a number of senior positions and directorships in private and public companies, including Resource Investment Strategy Consultants, the Anglican Diocesan trustees and the Olympic Team Appeal for Western Australia. Mr Court was elected to the Western Australia Legislative Assembly in 1982. He served as Premier and Treasurer of Western Australia from 1993 to 2001.

Amb. Sanjay Kumar Verma is an officer of the 1988 batch of Indian Foreign Service (IFS). He was stationed at the Consulate General of India, Hong Kong and at the Embassy of India in China, Vietnam and Turkey, before serving as the Consul General of India in Milan, Italy. Amb. Verma was also the Indian Ambassador to the Republic of Sudan. Following his tenure in Sudan, Amb. Verma served as Joint Secretary (Global Estate Management) in MEA, New Delhi. Prior to his arrival in Japan as the Ambassador of India, Amb. Verma was posted in MEA, New Delhi as Additional Secretary (Administration) and was also in charge of the Cyber Diplomacy Division.