“The 2020 U.S. Elections and Potential Challenges to U.S.-Japan Relations” 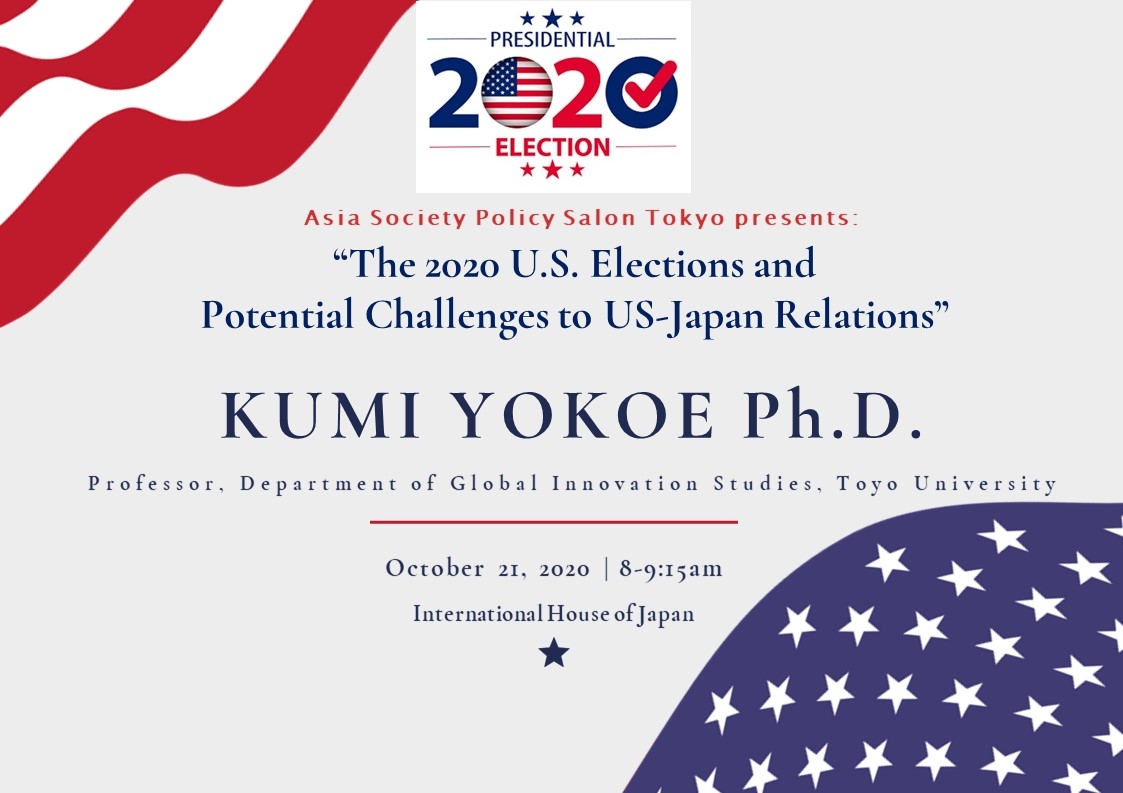 On Thursday, October 21, Asia Society Japan Center will welcome, Dr. Kumi Yokoe of Toyo University’s Department of Global Innovation Studies for a conversation titled, “The 2020 U.S. Elections and Potential Challenges to US-Japan Relations”.  Part of the pre - U.S. Presidential Election series, Dr. Yokoe will share with us her insights of the 2020 race to the White House and a look on the potential impact of the U.S. – Japan relations.

Dr. Yokoe has worked extensively covering the U.S. Election since 1996. She was a senior fellow at The Heritage Foundation in Washington, D.C. which predicted President Trump’s win in 2016. This election is truly unique with the multiple global crisis before us, but in this conundrum, how will the secret Trump supporters and the Millennials play out on November 3rd?  It is an opportunity for us to sum up the past 4 years and what to anticipate for the U.S. – Japan relationship going forward.

Please join us for a in-person breakfast at I-House.  Online participation is available for Founding Members upon registration. This is an off -the- record program.

Kumi Yokoe, Ph.D., is a professor in the Department of Global Innovation Studies at Toyo University since 2017. She is also a director of Kyoaikai (Hospital and Nursing homes) and an outside board director of MEITEC Corp.

She received her B.S. from Meiji University and her Ph.D. in Policy Science from Chiba University of Commerce and was a fellow of the Matsushita Institute of Government and Management researching American politics. Later, she became a visiting fellow at Princeton University and later at The George Washington University.

In her extensive research, she has covered the U.S. presidential elections since 1996.  She was President of VOTE Japan Inc under Hitachi, which consulted on E-Government and E-Politics from 2001-2004.  From 2011-2014, she was a Visiting Senior Fellow at The Heritage Foundation in Washington, D.C.

Dr. Yokoe have published 10 books on American politics and culture. Her newest book “Trump World in Millennial Era” will be released on October 20.