A Different Kind of August? 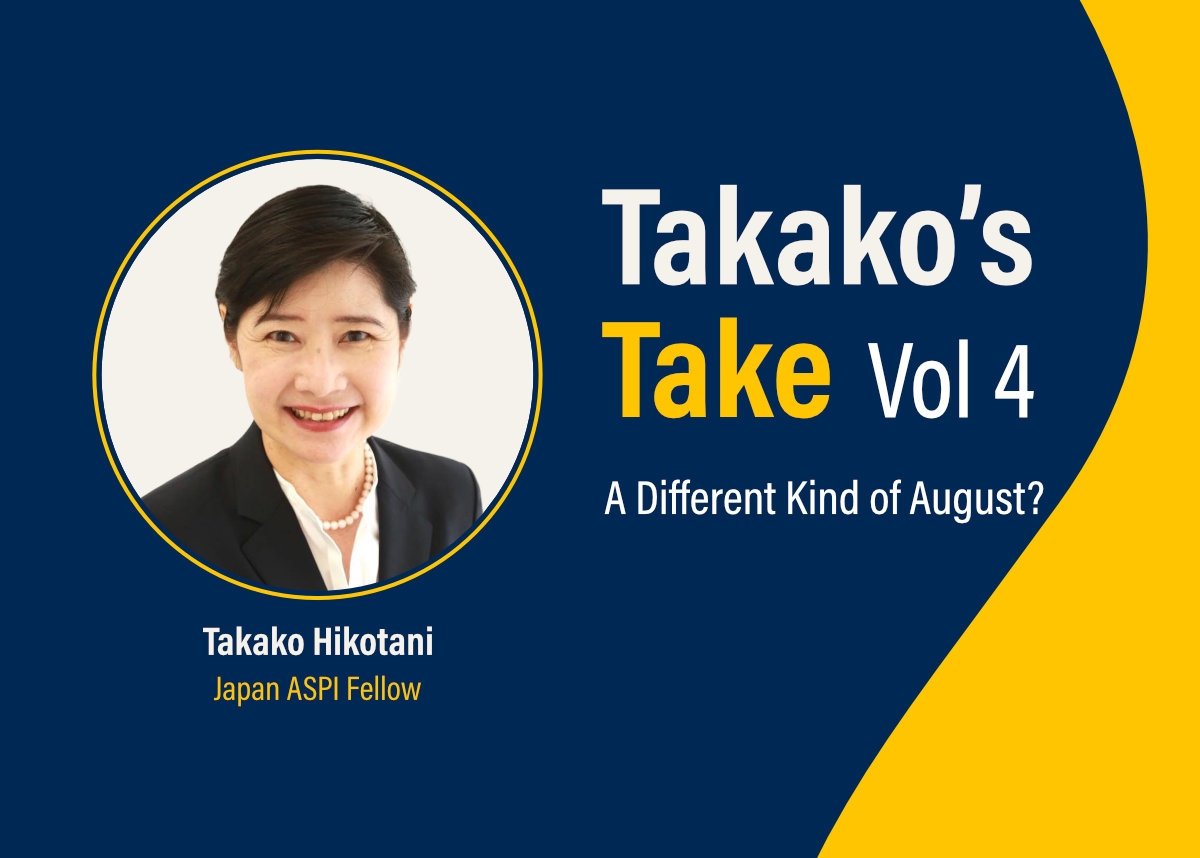 August is a month of war remembrance in Japan. Memorials to peace on the 6th in Hiroshima and the 9th in Nagasaki are followed by events on the 15th, commemorating the end of World War II. All events are broadcast live on TV, where participants and viewers share a moment of silence. Throughout August, newspapers run articles about World War II, and on TV, we see special documentaries and reruns of movies about war.

Some have criticized this phenomenon as August journalism. First, critics argue that coverage focuses on the suffering of the Japanese people, with insufficient attention to the sufferings imposed by the Japanese during the war. Second, they contend that the coverage has become too routine and too familiar: people in black suits sharing a moment of silence under the scorching sun is just another August event alongside high school baseball.

But more notably, some argue that August journalism molded the Japanese mindset about war and peace, and has prevented the Japanese public from thinking seriously about war and what it takes to maintain peace. They argue that August journalism is misleading, that it makes people believe that pledging to never engage in war and praying for peace is sufficient to keep them out of war.

In many ways, this year was no different than those in the past: we witnessed the familiar August journalism. And there may have been more coverage of Okinawa this year, commemorating the 50 years since the end of the occupation of Okinawa by US forces in 1972.

Yet at the same time, this year has seemed very different. The year 2022 opened with missile tests by North Korea, followed by the Russian invasion of Ukraine. Opinion polls showed that the Japanese public has become more concerned about the security situation surrounding Japan. In a February poll, 77% of Japanese respondents worried about a possible spillover effect of Ukraine on China’s thinking about whether to take military action against Taiwan. Then in April, 55% of respondents agreed with the LDP’s proposal to increase defense spending to up to 2% of GDP.

In July, the Japanese public’s sense of security was shaken following the shooting of former Prime Minister Shinzo Abe. While the political discussion about the meaning of this tragedy has somewhat shifted, the shock of gun violence in a country with very few guns still lingers in the public mind.

Then came August. A month that was supposed to be about reflection and peace was instead a month of harsh reality checks. China undertook military exercises — in response to Nancy Pelosi’s Taiwan visit — at a larger scale than expected, and in such close proximity to Japan, it was shocking to many. Now the public seems worried less about the spillover effect than a possible entrapment in a crisis in Taiwan, with 81% of respondents in a poll on August 10 expressing such concerns.

In 2020, Kevin Rudd, President of Asia Society and former Prime Minister of Australia, wrote an article in Foreign Affairs titled “Beware the Guns of August – in Asia: How to Keep US-Chinese Tensions from Sparking a War.” Guns of August, written by Barbara Tuckman about the earliest stages of World War I, is about how misconceptions, miscalculations, and mistakes led to the tragedies of war. It tells us how war can be a result of unintended consequences. The book, published in 1962, is known for allegedly impacting President John F. Kennedy’s thinking during the Cuban Missile Crisis.

Two years ago in Japan, August for most people was not about Guns of August, that war can happen in unexpected ways. Two years later, is it time that the Japanese public should think about August, not only as a time to reflect upon past wars and pray and pledge for peace but instead as a time to consider war as a likely occurrence, to become more vigilant, and to prepare for war?

Prime Minister Kishida seems to be trying to balance the two aspects of August. As a political leader from Hiroshima, he has placed nuclear disarmament as an important mission for himself. In the book he authored in 2020 titled Towards a Nuclear-Weapon-Free World: Aspirations of a Brave Peace Nation, he talks about how his family roots have molded his thinking about war, especially about nuclear weapons. As foreign minister, he was instrumental in making possible the historic visit by President Obama to Hiroshima. And for the G7 summit meeting in 2023, he announced that Hiroshima will be the host.

At the same time, Kishida will be responsible for the drafting of the new National Security Strategy, and overseeing the planning of the largest defense spending ever for Japan, which will be consequential not just for Japan’s security but also for the security of the region for years to come. He must do so with an acute awareness that the spending must come at some cost and that there will be a need to either cut spending elsewhere or raise money somehow. In addition, he needs to do this while being mindful of the dangers of Guns of August — to make sure that no actions from either side will trigger an unexpected and undesirable conflict.

I personally believe in the significance of August journalism. War, after all, is about human suffering, and it is important to be reminded of that at least once every year, even if it seems somewhat force-fed at times. There should be changes in the content of August journalism. It should stop focusing excessively on the suffering of the Japanese public in the past and shift attention to both the suffering caused by the Japanese in the past and the ongoing suffering today. We also need to think more proactively about how wars can be avoided. In order to do that, we need to think more about Guns of August and learn from the past.

Understanding the past in the context of the present as well as deriving the right lessons from the past are both very difficult. This August may turn out to be a watershed moment for the Japanese public. August should not just be about reflection on the past, but it is also a moment to learn from the past and chart a path towards the future.