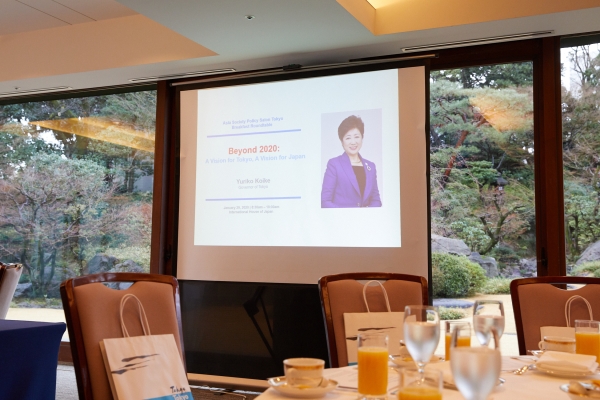 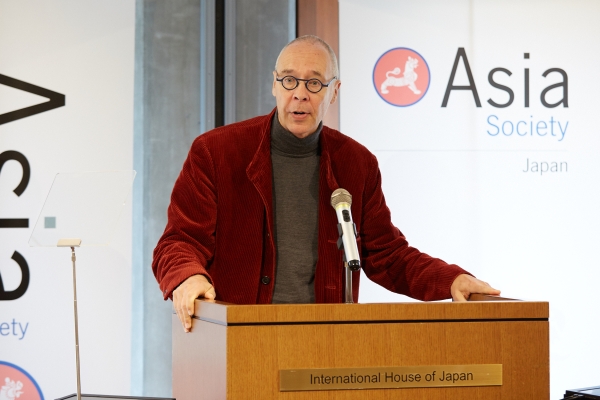 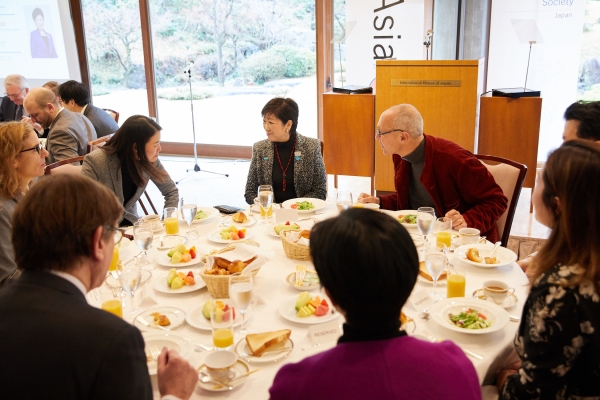 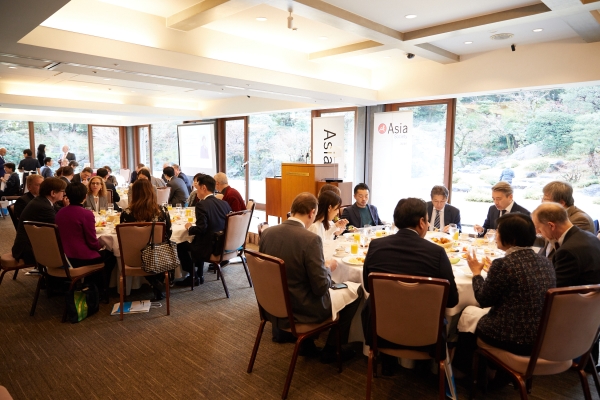 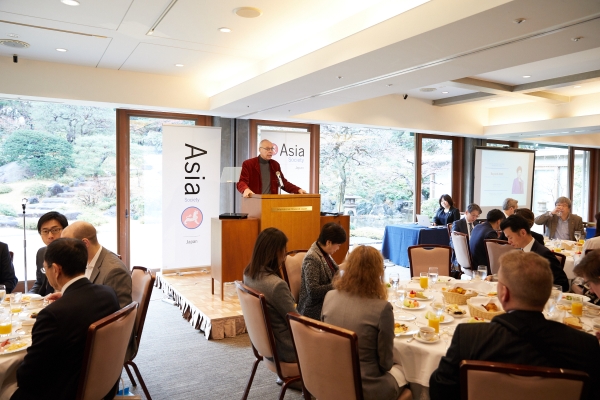 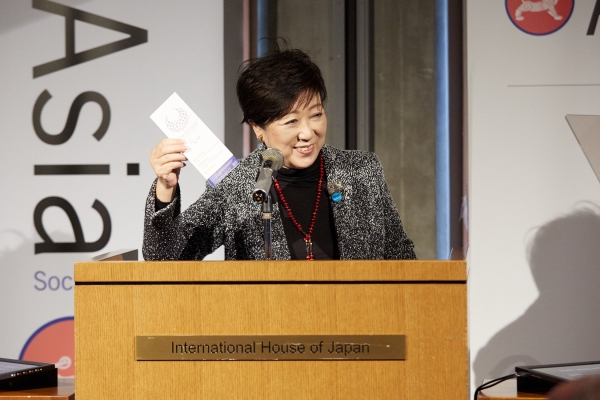 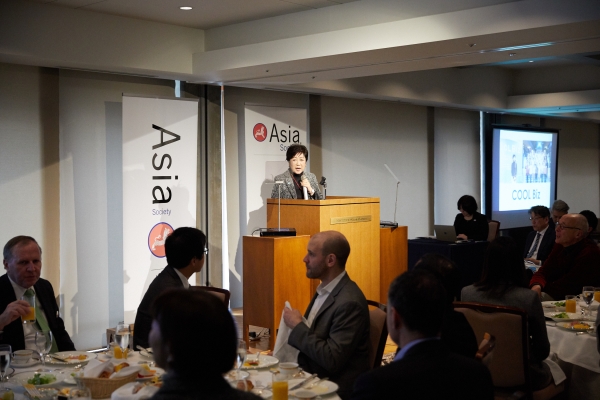 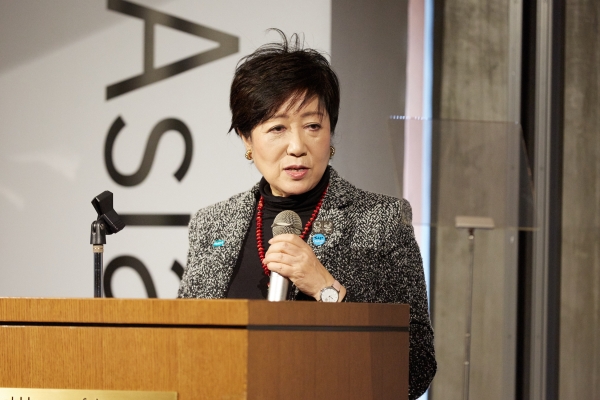 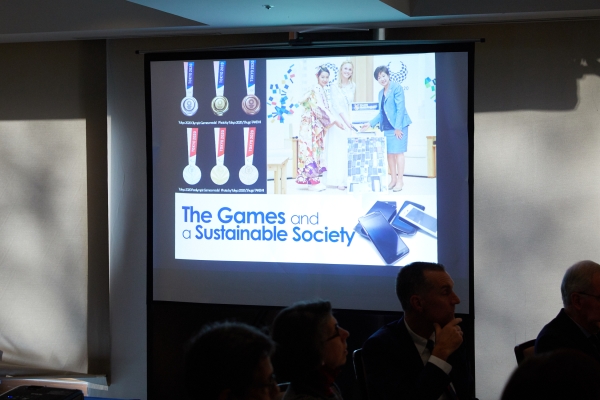 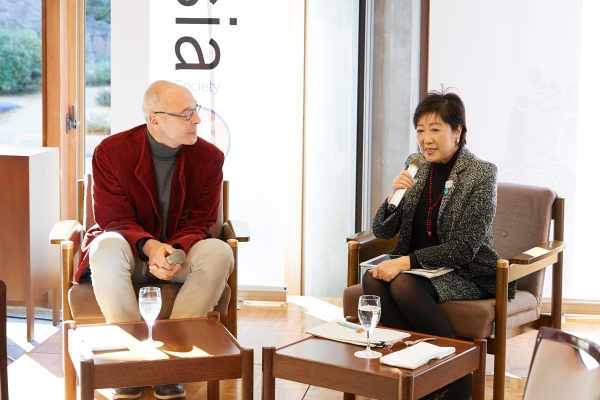 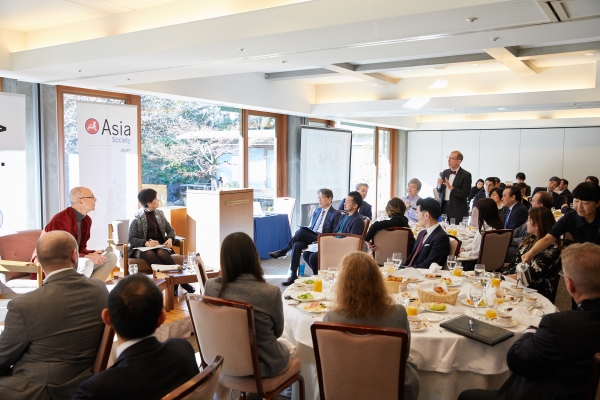 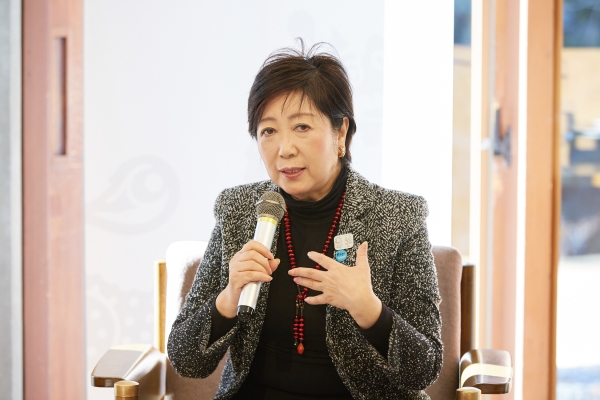 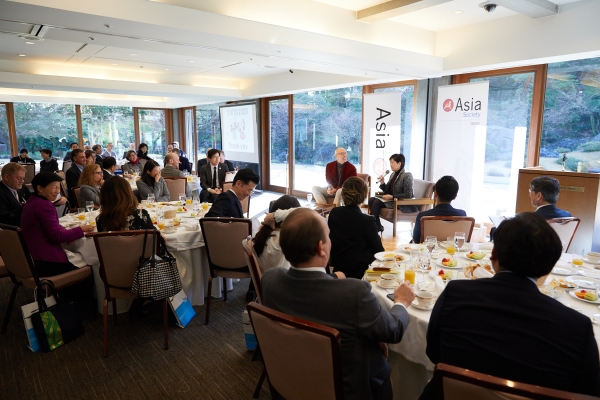 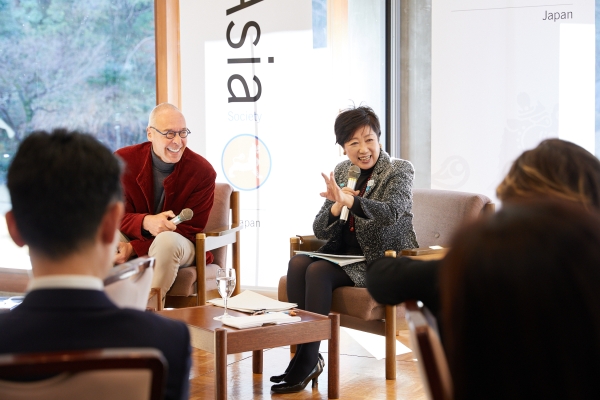 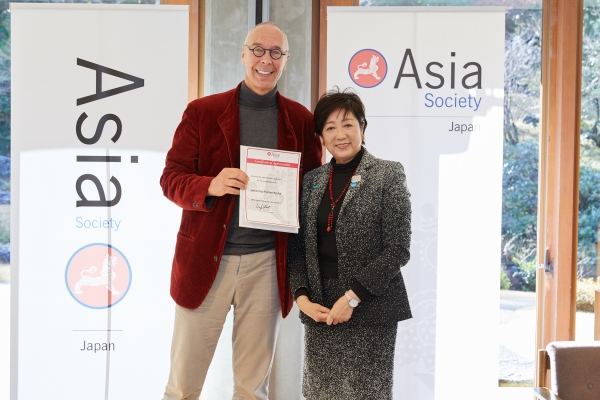 Governor Yuriko Koike began by introducing the three words that have shaped who she is today: 心(mind), 技(skills, technology), 体(body). Thinking based on these words led to her introduction of the “Cool Biz” campaign, which contributed to CO2 emission reductions and was later adopted nationwide, changing public thinking regarding climate change.

Governor Koike was elected the first female governor of Tokyo in 2016 and she has strived to put the needs of the people first, as Tokyo’s vitality originates in its people. She has focused on the greater empowerment of women, a critical issue in Japan, which sadly ranked 121th out of 153 countries in the World Economic Forum’s “Gender Gap Report 2020.” One of her first tasks as governor was changing women’s working environment so that they would not have to choose between work and child-rearing. Today, women account for 29% of the members of the Tokyo Metropolitan Assembly, marking the highest ratio of all prefectural assemblies. She leads a network of female governments and mayors joining forces to create a vision for empowering women.

Tokyo hopes to involve all of Japan in hosting the 2020 Olympic Games, which is envisioned as the “Recovery and Reconstruction Games.” The Governor is determined to host the Olympic Games with gratitude for the international assistance Japan has received in recovering from the Great East Japan Earthquake, and encourages spectators to see the progress made in affected areas. She feels that the Olympics will also be an opportunity to show the world how sustainable the Olympic Games can be. Tokyo’s sustainable medal program recovered material from mobile phones and electronic devices to create the 5000 medals that will be presented to successful athletes. Governor Koike hopes that this practice will be continued in succeeding games.

Tokyo also takes the lead in addressing climate change. Under the Zero Emission Tokyo Initiative launched last May, Tokyo seeks to use renewable energy and CO2-free hydrogen, and contributes to the world’s goal to achieve net zero carbon emissions by 2050. Governor Koike encourages the use of furoshiki, a Japanese tradition created by Japan’s environmental wisdom and beautiful design. Climate change will create social and economic opportunities for growth. The environmental financial market has grown exponentially worldwide and Tokyo has issued 20 billion yen per year of Tokyo green bonds since 2017.

The Tokyo 2020 Games will not succeed without the success of the Paralympic Games. Therefore, in order to foster enthusiasm towards the Paralympics, Tokyo has promoted parasports. With a view to creating an inclusive society, it was also the first local government to issue an ordinance obligating new facilities to have barrier-free the restrooms. Tokyo also aims to host tobacco-free games.

Before the 2020 Games,, Governor Koike hopes to establish an intangible legacy, establishing new working styles, such as teleworking and staggered commuting, which should lead to an increasingly productive society. The Strategic Vision for Tokyo’s Future embraces 3Cs, namely, children, community and “choju” (longevity). Longevity offers an opportunity to choose a low life. Tokyo is changing every day. Governor Koike hopes that visitors will find the unique charm of Tokyo, where old meets new. She hopes that the legacy of the Tokyo Olympic Games will be passed along directly to the Los Angeles Games.

Governor Koike’s initial comments were followed by intensive discussions with the floor, which covered: what drove Governor Koike to go against the current in her young days and learn Arabic and then enter politics, what citizens and the Minister of the Environment can do to act more quickly on the environment, plans for a women’s empowerment conference this year, and her thoughts about same-sex partnerships.