ART + BUSINESS Beyond 2020 - Discussions of Corporates Partnering with Art 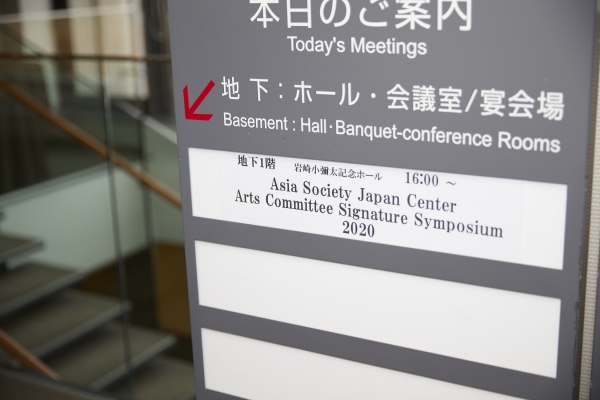 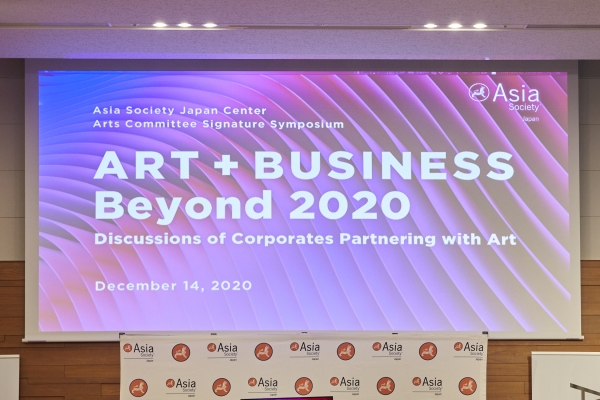 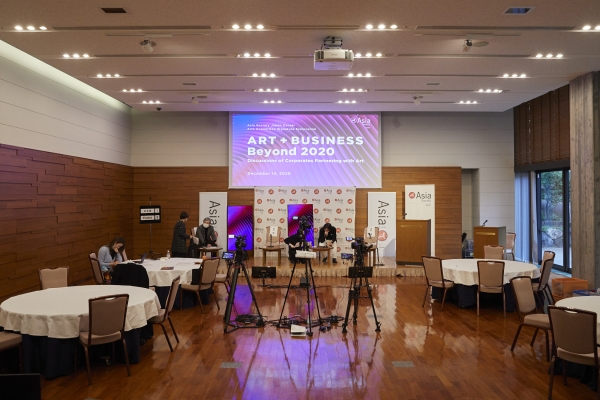 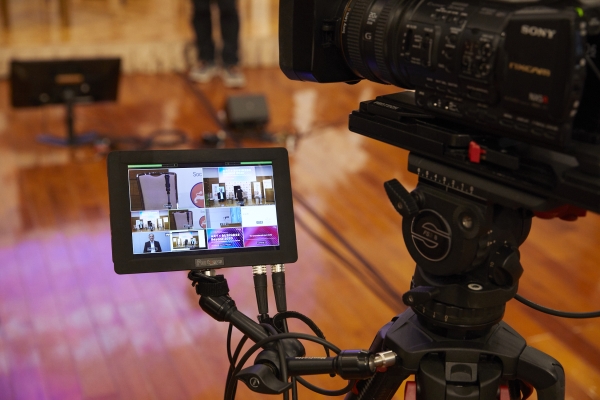 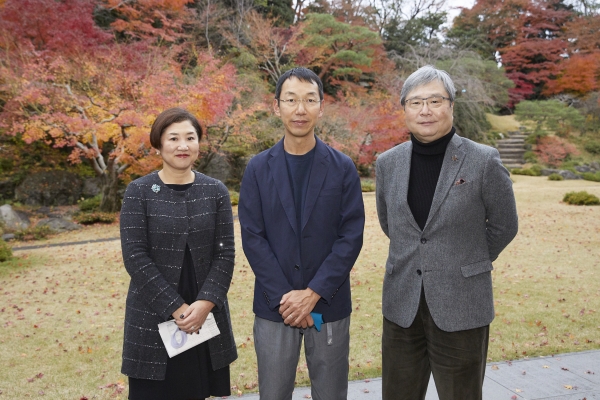 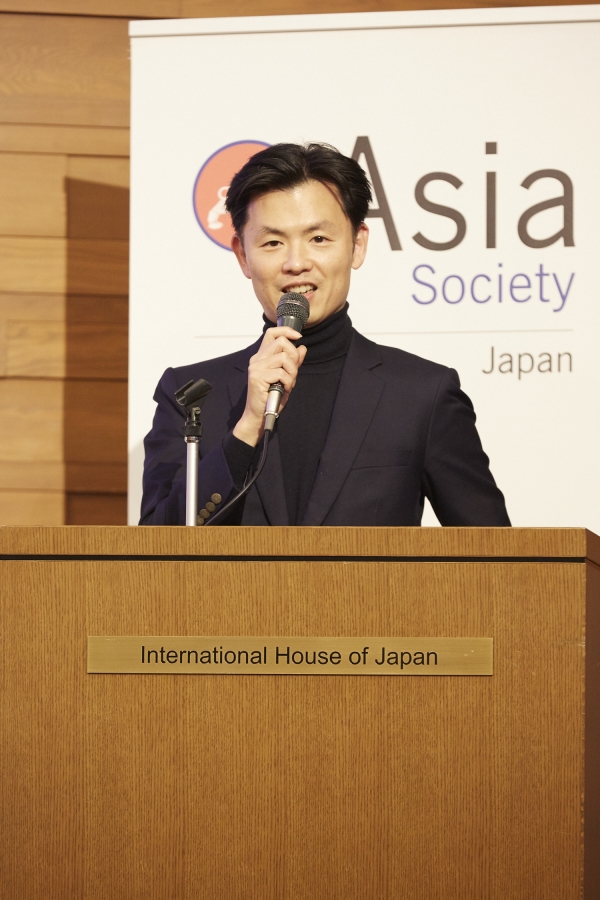 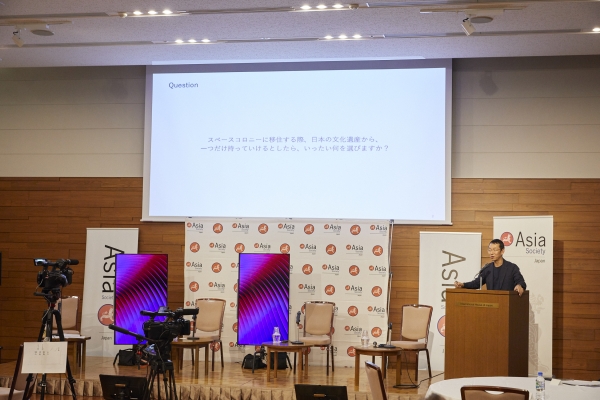 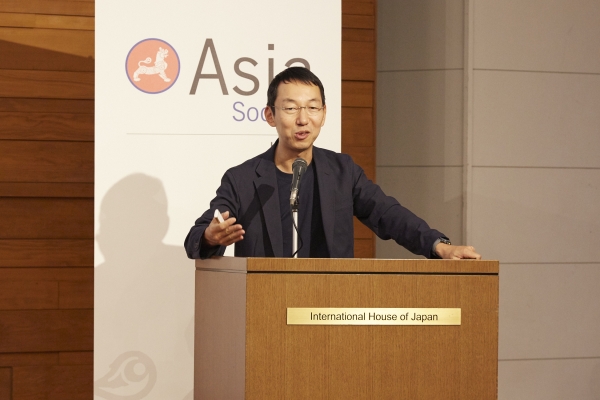 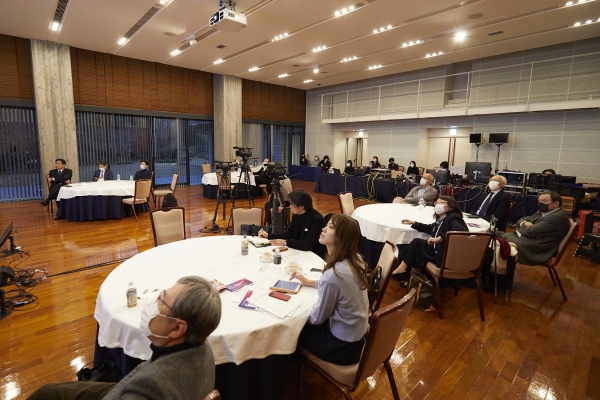 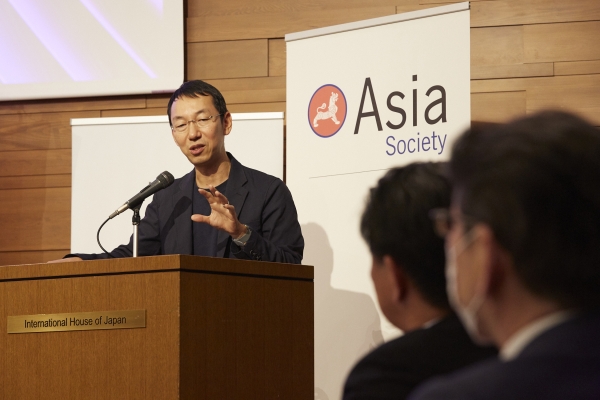 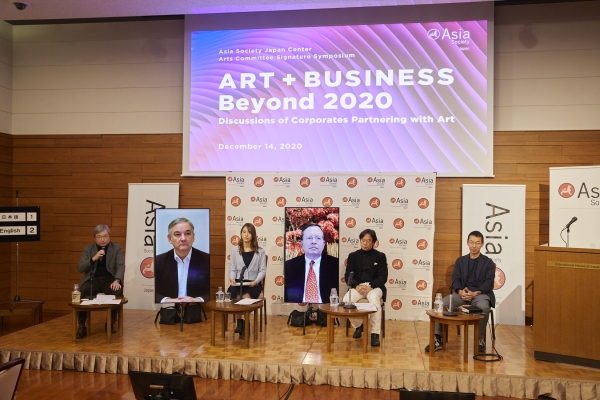 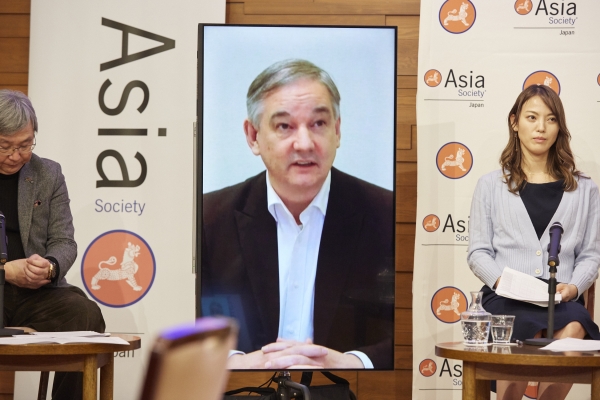 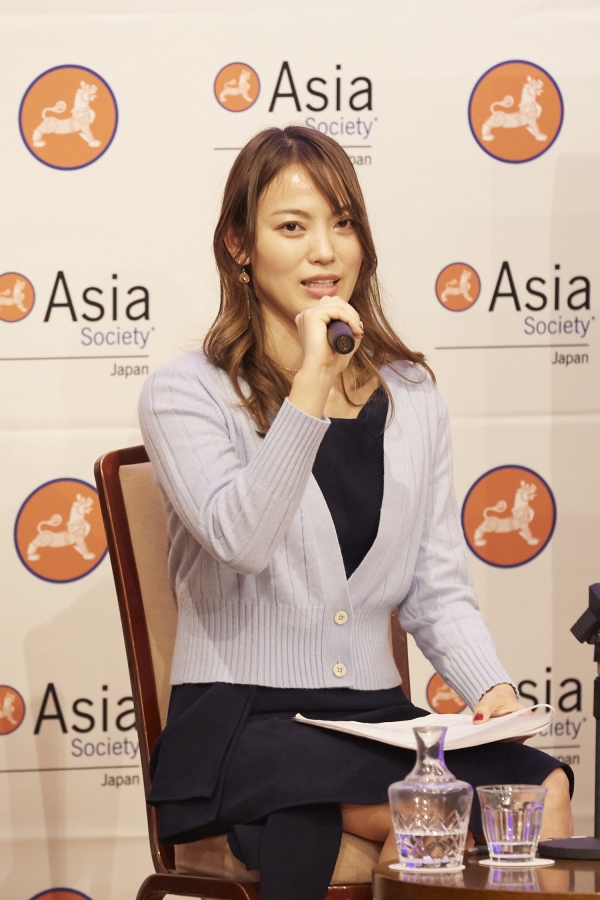 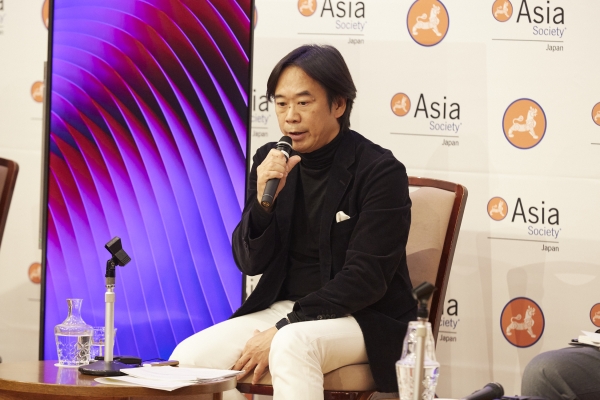 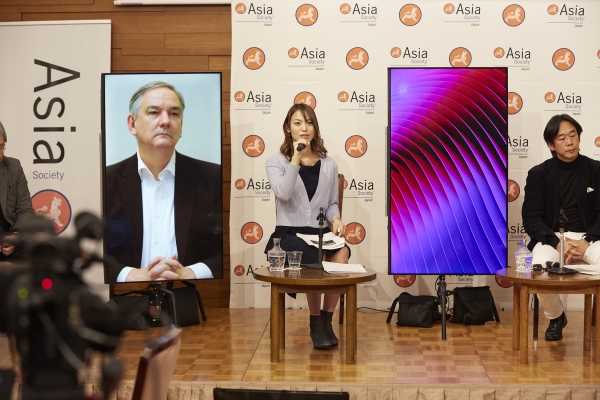 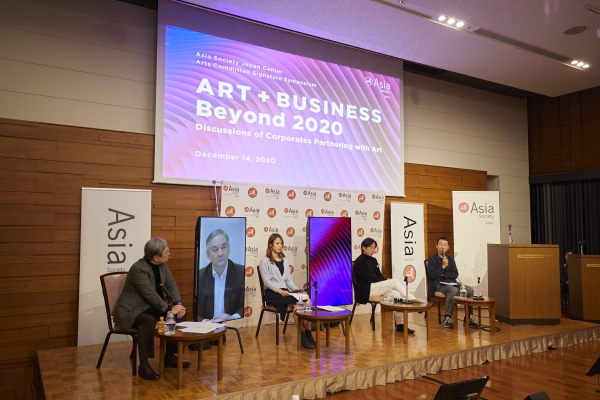 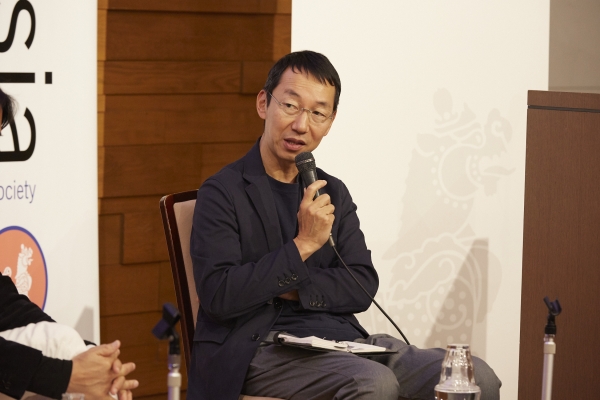 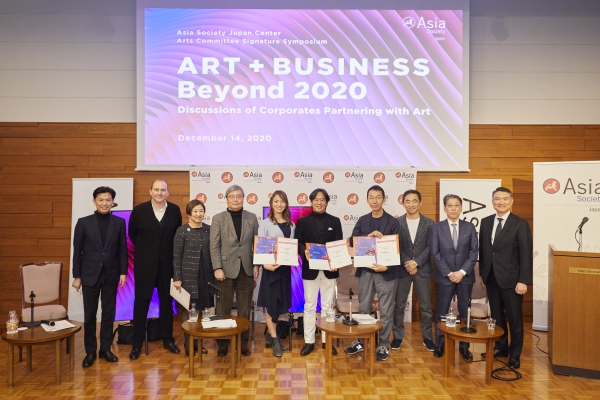 Discussions of Corporates Partnering with Art

Part 1: Keynote by Shu Yamaguchi (Author of the best seller, ““Why the Global Elites Learn Arts and Aesthetics” - What is Art and Science in Management”)

Mr. Shu Yamaguchi began his initial comments with the question: If it was the end of the world and you had to move to a space colony, what is the one piece of Japanese cultural heritage that you would you take with you? Having asked this question to a broad range of audiences, 90% of the answers have covered architecture and art from the 18th century and before.

What have we created after the Industrial Revolution, or in the time after the 1964 Tokyo Olympic Games, since when we have experienced seventeen-fold GDP growth? To offer some example, we have produced ugly cityscapes, tangled electric wires, conspicuous signposts near tourist destinations, and a highway over Nihonbashi Bridge. No one ever intended to ruin the landscape, but ironically, the more business, the more damage has been done, and it is costing more to fix our negative heritage. What are we doing better than we did during the Edo period, before we relied on fossil fuels – when we lived in a circular economy?

If “truth, goodness and beauty” are the three properties that judgement should be based on, should our business decisions be based on science or art? When the world was full of dissatisfaction, we had to explore solutions in an efficient way, so we relied on science. However, today, we are living in times when we have to search for issues to solve. Since 1960, GDP growth has never been larger than the previous decade in the seven developed countries. More than 80% of the Japanese population say that they do not need any more material goods, implying that we are currently living in a materially oversaturated society, or we are approaching the end of civilization.

Yet, even under these circumstances, companies need to continue to pursue growth. Just as war and major disasters stimulate consumption, branding today is based on creating chaos. Marketing systematically promotes destruction.

In contrast, the paintings and buildings that we call cultural heritage today were not produced solely as “art” but were originally business projects. We need to reintroduce that idea into the modern world. Now that people are not seeking further convenience or growth but are rather in search of cultural richness, we are arriving at a turning point in value creation. The role of business as we know it is ending and the time has come for us to consider not only scientific judgment but also artistic judgment as we make decisions.

Following his initial comments, Mr. Yamaguchi engaged in discussion with the floor on topics including social balance scorecards to measure new creation of value and empathy economics.

Mr. Rob Stewart initiated the conversation by introducing the UBS collection, which contains over 3000 works of contemporary art organically collected since the 1960s. The collection is loaned out to museums and institutions, but most are hung in their offices, effectively inspiring staff and serving as conversation breakers. Other aims of building the collection are: attracting clients, nurturing leadership through education and awareness-raising, branding, and community outreach. UBS purchases the works of the most dynamic artists of the times and as a collection creates a holistic value distinct from the value of individual pieces.

Mr. Kenichi Hirono has integrated art in many development projects. The Guideline for City Planning 2020 was developed through public-private partnership for the Marunouchi Area, covering 120ha on which ten buildings would be built. The most important of the eight guidelines was: “People gather and enjoy lively scene and culture.” The concept was to transform the area from simply a destination for work into a multifunctional town, with a focus on bringing activity to the main street, Bankers’ Street, where the shutters would close at 3:00 pm, and creating flows of people coming to enjoy shopping. The main street was turned into an art street decorated with objects introduced in collaboration with the Hakone Open-Air Museum and the sidewalk was widened to be lined with benches and trees. The street has been the venue of many art events including the famous Tokyo Millenario (1999-2005). As the great educator Fukuzawa Yukichi said, a town’s quality is nurtured by the high-quality culture it is home to, and Mitsubishi Estate seeks to continue to play an active role in fostering culture.

A trained artist and digital designer, Ms. Makiko Takashima, conducts research on human behavior and emotions at Fjord, a design consultancy at Accenture. Accenture’s attitude towards creativity and art can be expressed as: “Infuse business with art. Inspire people with art. Empower the Japanese art world.” Fjord organizes events and incorporates art into the workspace. To create innovation, Accenture has artists join project teams, inviting new perspectives and creating new business opportunities. Describing the pillars of her artistic approach, namely, performance, information design and technology, and philosophy, Ms. Takashima introduced her award-winning artwork. She mentioned that one of the roles of artists in the corporate world was offering their understanding of human society. In turn, the business world has taught her: 1) the importance of being able to logically explain her artwork; 2) a sense of speed and the toughness to be overcome in corporate activities; and that 3) team work and project management expands not only business but deepens artwork. Therefore, she believes that artists should incorporate that essence of the business world in their works, while maintaining a free spirit and innovative mind.

Following their opening comments, the panelists engaged in in-depth conversation. Asked if philanthropic activity in Japan was sufficient, Mr. Yamaguchi offered his view that Japanese firms lacked the social impact that American and European firms have. What we currently need to reintroduce is an “Art as Business” context, as could be found in Michelangelo’s studio and those of early modern Japanese artists, instead of bringing art into business or vice versa as a trend. He also noted that by engaging in CSV, companies were offsetting their activities of destructing social value; and therefore, they tend to withdraw from philanthropic activities once their business starts performing badly.

Ms. Takashima was asked about the difference between an artist’s mind and the businessperson’s mind and pointed out that time frames and priorities seem to be different. While artists tend to find value in seemingly time-consuming and meaningless experiments, in which they will often discover new ways of expression, they are often told not to take too much time. “Businesslike” experiments are more likely to be based on assumptions and to eliminate inefficient processes. It would be easier for artists if the business world could be more open to the conflicts and bugs produced by artists.

How do businesses link business goals and art activities? Mr. Stewart highlighted that longevity has a value. UBS believes in the fundamental social value of what they do and incorporates a range of measures to evaluate their work. Mr. Hirono referred to how Mitsubishi focused on the branding of the Marunouchi area to create a bright and lively place where people want to work and spend money. A developer’s work continues beyond the end of a construction project, managing the area in order to maintain its value. In that sense, art fits well with long-term city planning.

What is the potential for considering the SDGs in collaborations between art and business? Ms. Takashima showcased the art society’s rising consciousness of sustainability, as represented in establishment of the Sustain Lab at the Royal College of Art and growing permanent collections focused on sustainability at MOMA and the Victoria and Albert Museum. An artist’s approach to sustainability can shed light upon human emotions or sensual perspectives of sustainability issues through conversations with scientists and fieldwork.

The insightful conversation among the panelists concluded with each speaker naming one item made after the year 2000 that they would take to the space colony.