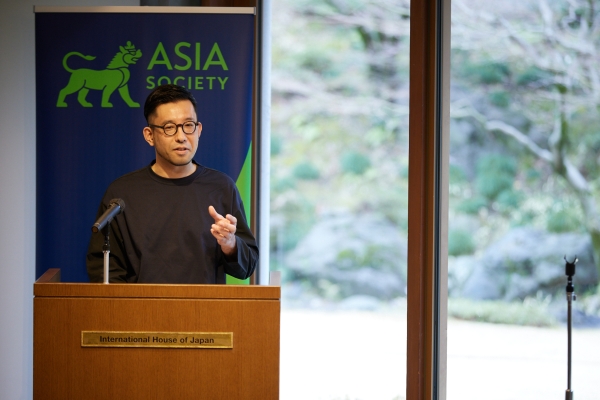 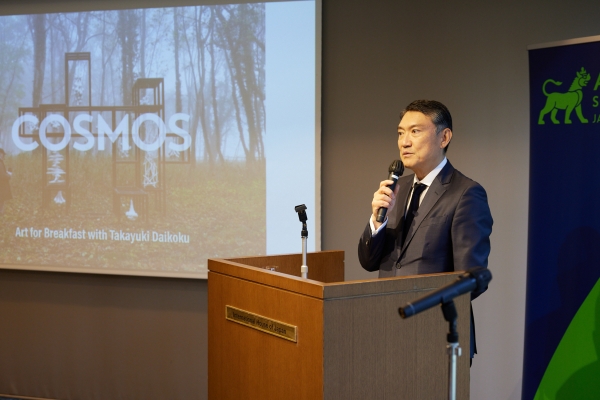 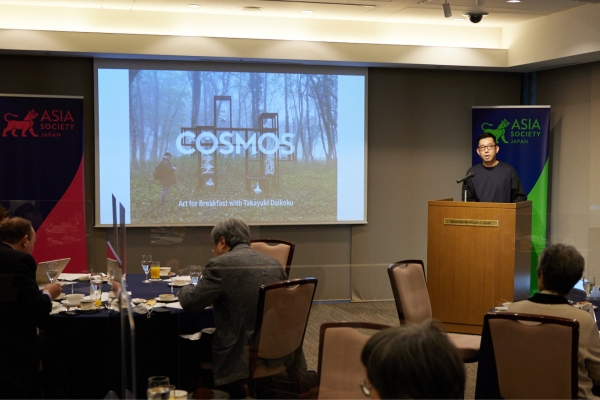 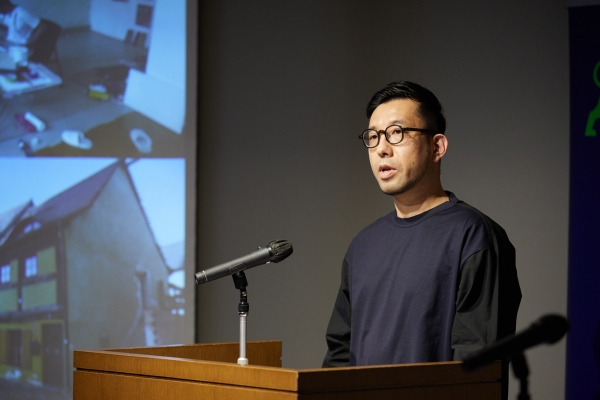 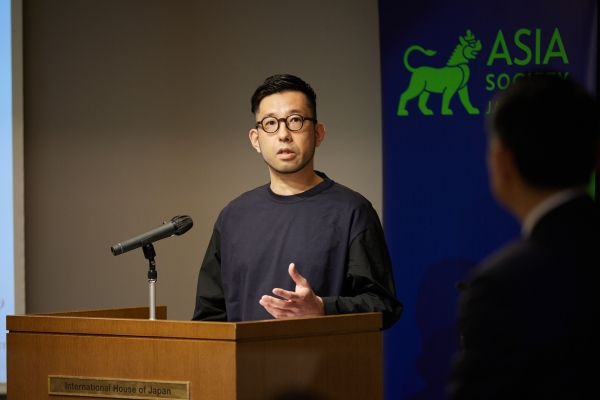 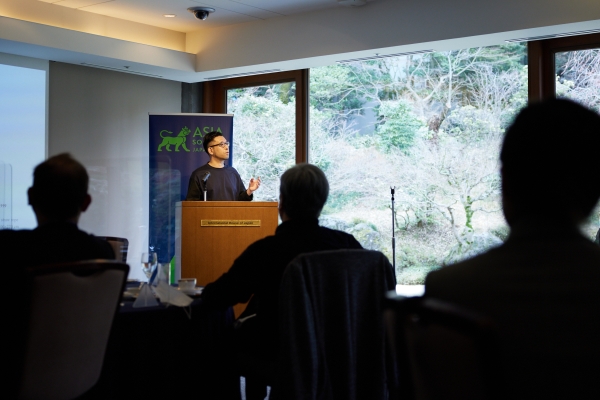 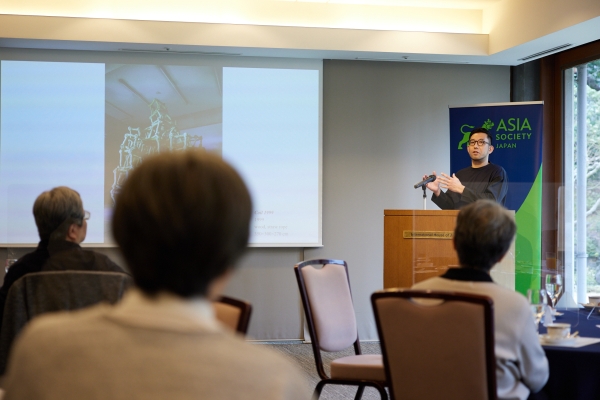 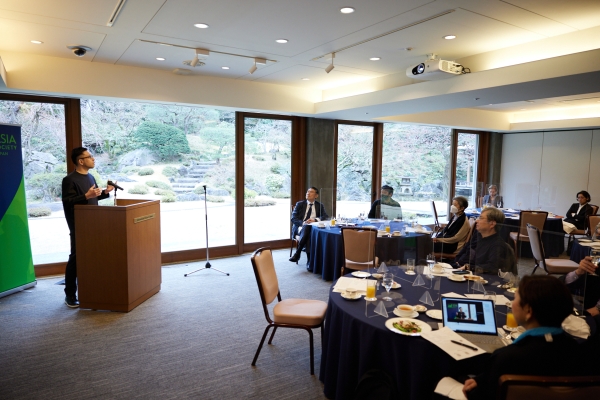 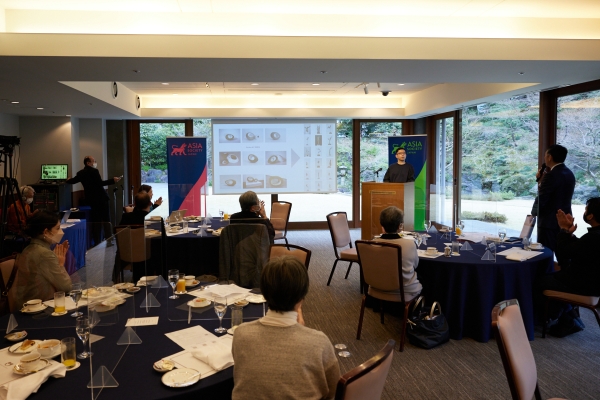 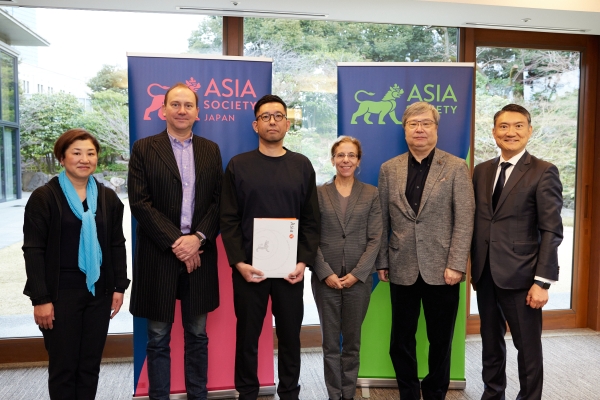 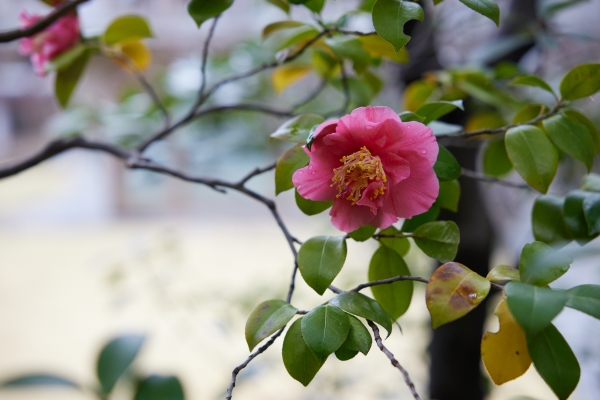 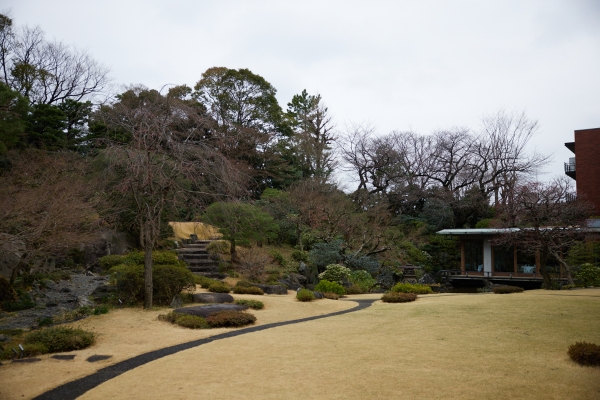 On March 18, 2022, a sculptor Takayuki Daikoku joined Art for Breakfast to give a presentation titled “COSMOS” which is a representation of his thoughts that diversity in any forms creates harmony and its relationships create beauty. He utilizes multiple materials from wood, washi paper, persimmon juice, mortar, metals, and other materials to explore forms and structures that can be conflicting but harmonious. He shared his journey in Japan and Germany and how the experiences and challenges have influenced his works.

Inspired by the nature of his hometown

Born and raised in Omihachiman City, Shiga Prefecture surrounded by rivers, mountains, and Lake Biwa, Mr. Daikoku was brought up in close contact with nature. Therefore, many of his sculptures represent plants and nature. Yet, he does not wish to imitate them and seeks to present the essence of nature through his sculptures. He has discovered that nature is an ensemble of simple parts; and therefore, his works are often an aggregate of simple organic forms. 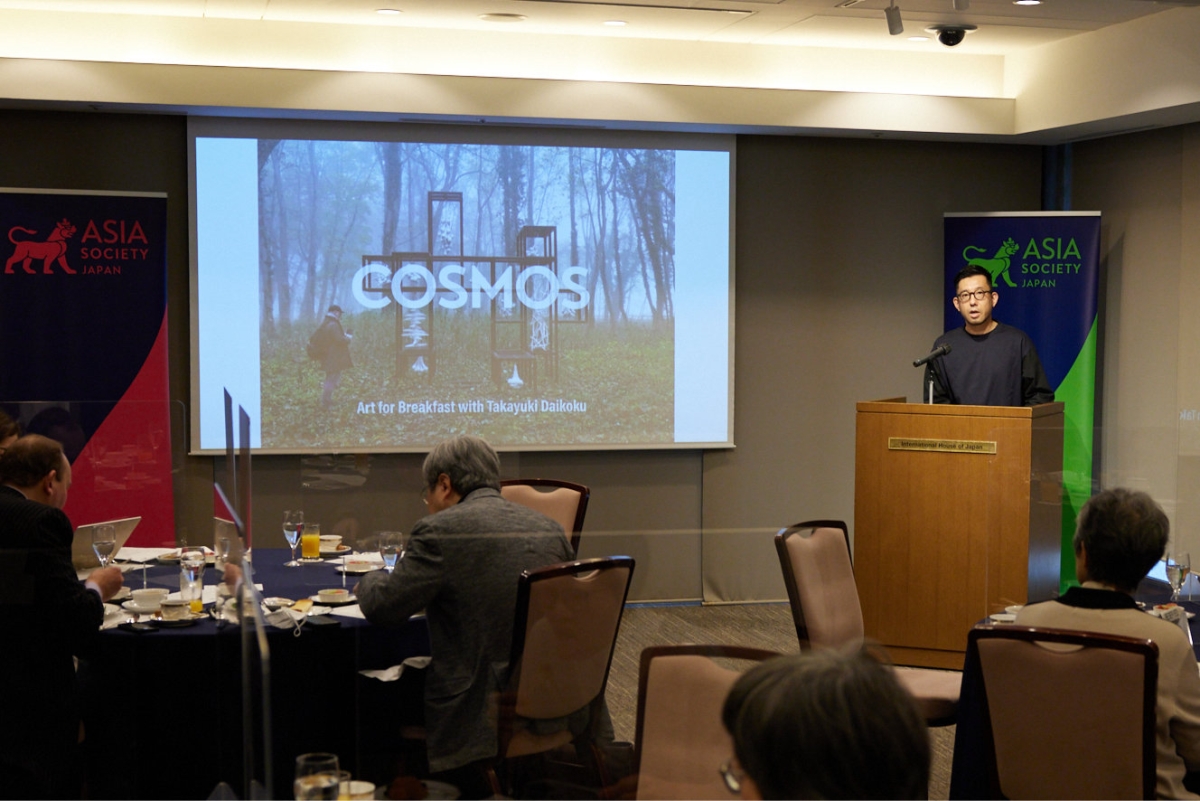 Mr. Daikoku looks back on his first stay in Germany as a turning point in his life. He first went to Germany to try his skills and luck, challenging himself to show his art at an exhibition within a year of his stay. With no local connections and little knowledge of the German language, he eventually met an artist through whom he successfully held a show. 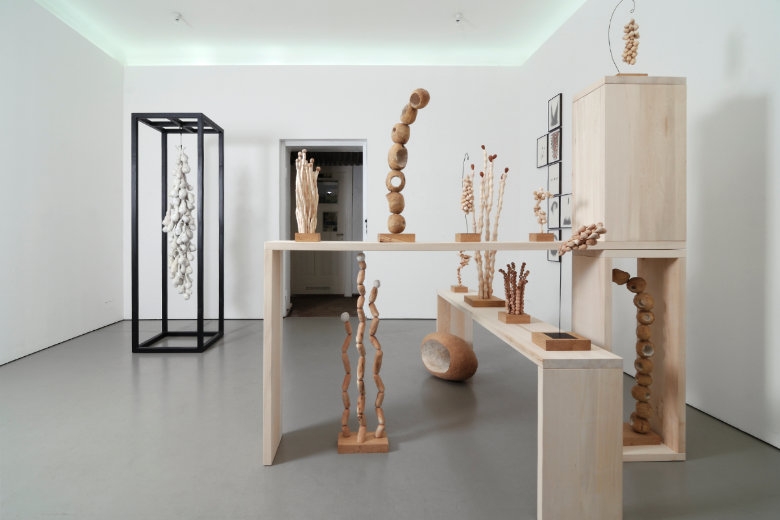 Losing his father at the age of thirty led Mr. Daikoku to think about the fragility of life. He decided to go to Germany again, this time first staying in Rathenow and later at a studio in Freisack. He held many exhibitions in Berlin and other cities before he had a solo show at Semjon Contemporary (Berlin) in 2013.

His works were inspired by the nature of Omi region, his hometown, and redesigned with inspiration from the German environment, culture, and design. He took his works back into nature where they were displayed against a backdrop of the forest. He has also compiled a series of photographs of his works, taken every two weeks from the same angle. Mr. Daikoku feels that during this period in Germany, his works were upgraded to a language that incorporates logical and mathematical beauty. 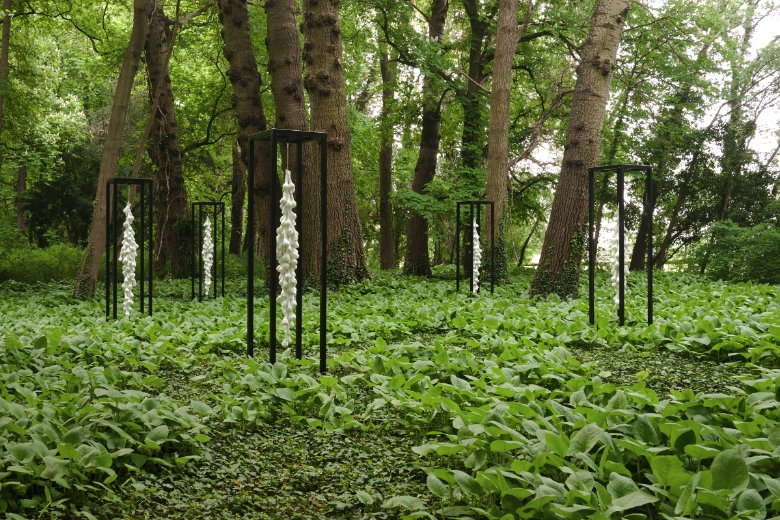 DANDANS in 2017 became the first exhibition after returning to Japan, followed by Marueido Japan in 2020. These exhibitions were opportunities to meet and interact with Japanese artists. Their presence and the friendly competition with them have been a motivational driver for him.

Mr. Daikoku has also continued to exhibit his works at Semjon Contemporary.

While the rest of the world was shutting down with the spread of COVID-19, Mr. Daikoku successfully installed a piece fully remotely for Project Cosmos No. 02 in Dallas, Texas. Schematic data for the iron frame was sent to the collector, who ordered the parts from a local steel company and set them up in her garden. He sent the “white vegetable” pieces to be hung from the iron frame to the collector and they were installed according to his instructions sent in a video conference.

The masterpiece was completed through a strong relationship transcending time and space between the three cities of Dallas, Berlin, and Omihachiman. Despite initial fears that the work could not be completed, having the collector participate in the installation ended up as a valuable experience that created a strong sense of ownership.

In conclusion, Mr. Daikoku pointed out that by learning from natural diversity, human society can become a flexible and healthy ecosystem.

Conversation with the moderator and guests 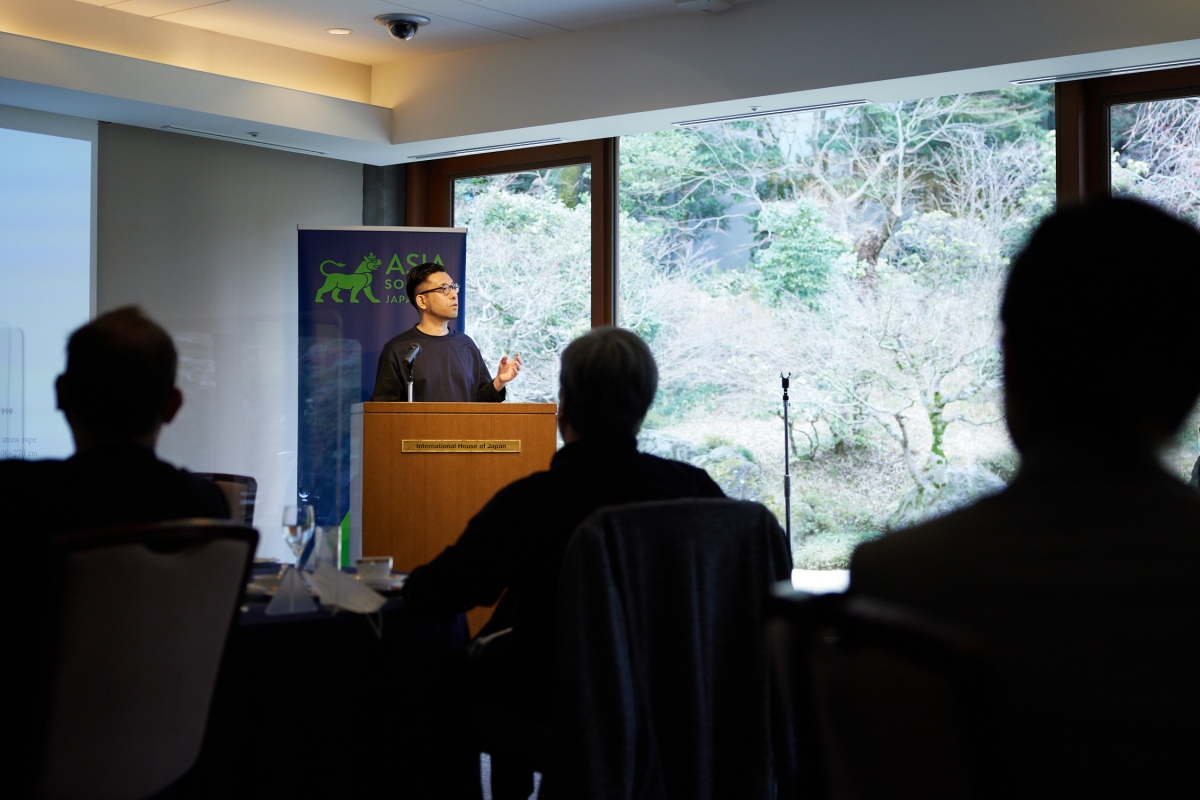 In a conversation with the moderator, Mr. Yoshihisa Kawamura, Mr. Daikoku elaborated on the different approaches to nature that Germans and Japanese have. The Japanese people believe that a spirit resides in all objects and creatures, while the Germans do not perceive anything beyond their physical being. He feels that German galleries were interested in how nature was captured in his works.

Later in his dialogue with the attendees, he also mentioned that he would like to explore placing the same sculpture in natural settings in Japan. When he installed his works in the German forest, he felt fairies and witches around him. He is curious to see how they would fit in Japanese forests, home to ghosts and monsters, or in front of Lake Biwa. 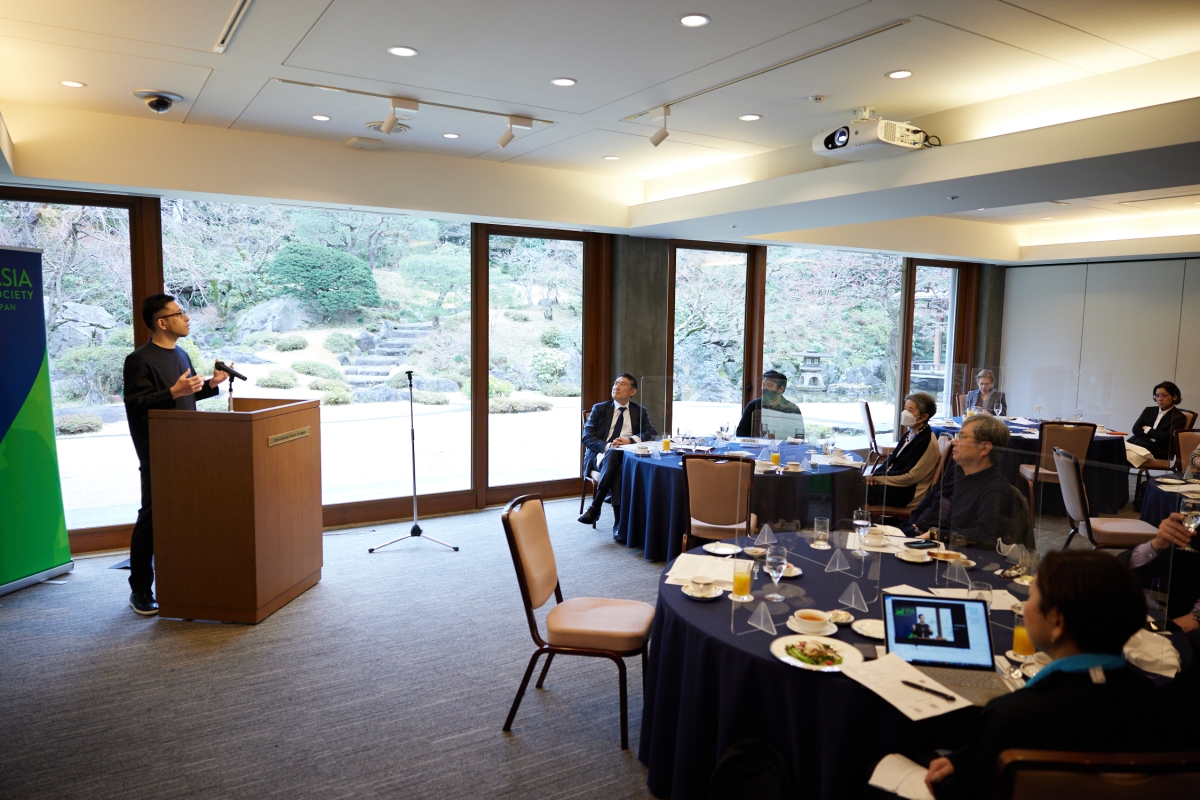 Asked about the difference between painting and sculpture, Mr. Daikoku referred to an argument made by 18th-century philosopher Johann Gottfried Herder, that sculpture corresponds to the sense of touch, a fundamental sense for understanding the world. In contrast, he sees painting as a two-dimensional form of creating illusions.

Other topics covered included one of his inspirational artists, Anish Kapoor, who integrates European ideas and Indian Hinduism; using different media, such as wood, paper, and straw, as well as different forms of art expression, including sculptures, painting, and photography, in his works; and the inspiration behind the grid forms used in his installations. Mr. Daikoku also pointed out that for Japanese contemporary artists to receive more attention globally, they need to become more engaged in communicating their work in their own words. 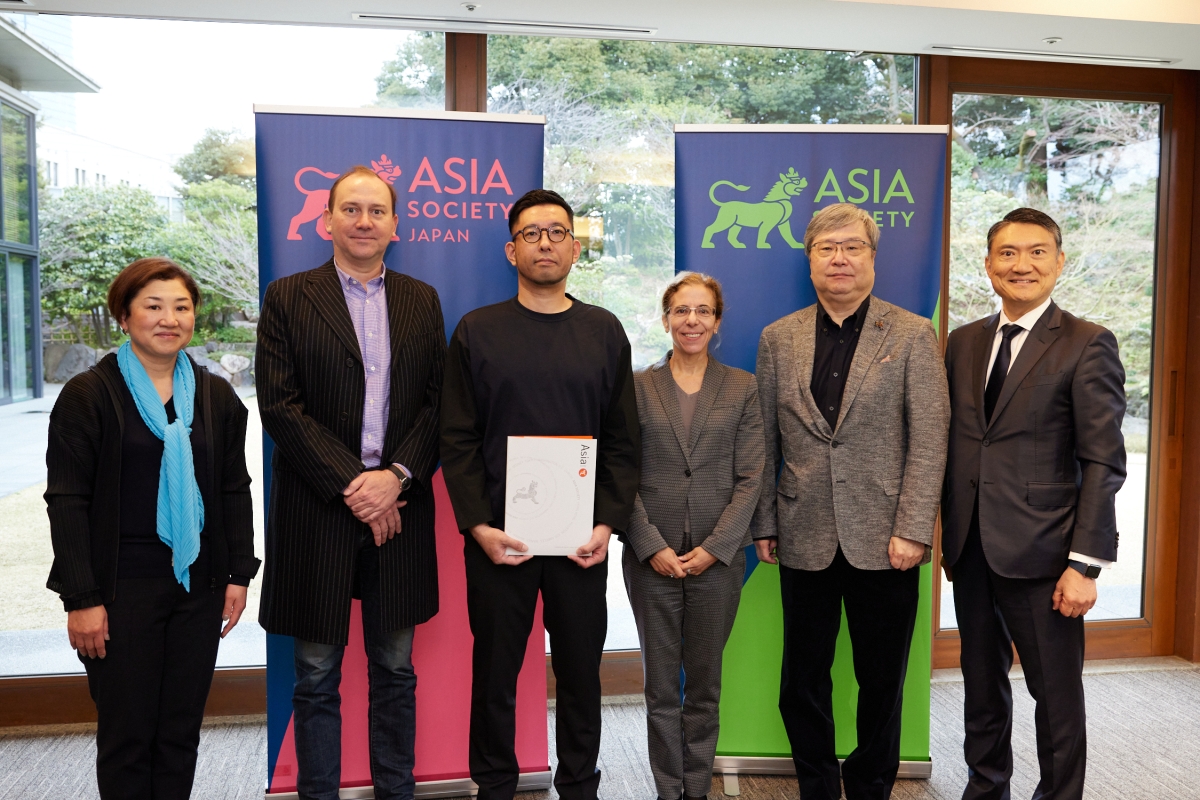