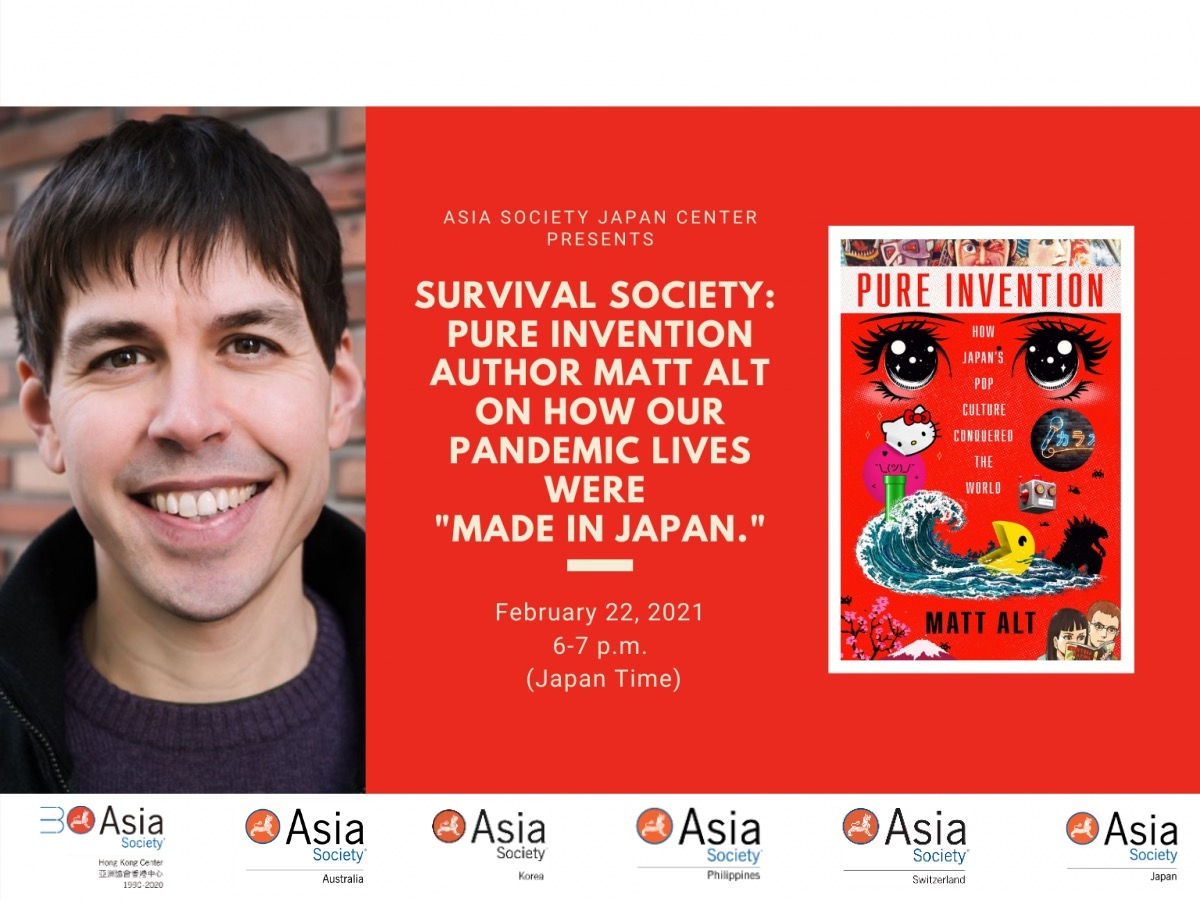 TOKYO, February 22, 2021 — Matt Alt, the author of “Pure Invention: How Japan’s Pop Culture Conquered the World”, joined Art for Breakfast online to discuss how our pandemic lives were “made in Japan” and tell us how he became an expert in Japan’s pop culture. The session was moderated by an author, Kenneth Lee. Video is also available below.

We live in strange times. We are more interconnected than ever before and yet we are seemingly crushingly lonely. The milestones and goalposts of adulthood seem to be continually pushed off to the point that many young adults still refer to their lives as “adulting”. Electronic systems make us the center of attention and yet isolate and alienate us at the same time. When things get rough, we escape into virtual constructs and connect with other people in a fantasy environment.

Each one of these phenomena has a distinctive precursor in Japanese society decades before we began to see them happening in the West. Starting in the 1990s, young people in Japan had difficulty launching their careers and leaving the nest. Adulthood was being reimagined by young people across Japan crushed by their nation’s systems. New versions of communication emerged and were forged on the streets of Japan to suit electronic medium that took off in Japan before they were introduced to the rest of the world. While it is tempting to think of Instagram and other SNS to have sensationally created influencers, the karaoke machine might have been the first user-generated content that made everyone feel like a star during their song, and the Sony Walkman might have been the first device that allowed us to create a bubble around us and disconnect from the rest of the world.

The title of Mr. Alt’s book, “Pure Invention” has been taken from a quote of Oliver Wilde, who wrote that Japan was a “pure invention.” Wilde was referring to Japonism, which had swept the world after American gun boat diplomacy had opened Japanese ports to the West in 1850s, thus unleashing Japanese arts and crafts products onto the international market. Western tastemakers projected values that they felt their countries had lost in the drive toward modernity. In a very real way, Japanese tastes came to redefine what was considered sophisticated at the turn of the century.

Today, this phenomena continues, as we see people all over the world embracing Japanese tastes and values in their fantasies and real life.

Mr. Alt grew up in an era of Japan-bashing in the 1980s, a period after WW2 when it was widely believed Japan’s economic ascendance equaled rivalry to American hegemony. Japanese products, including electronics and automotive, disrupted Western products one after another, undermining Western democracies’ confidence to the point that people felt threatened by what was literally called the “Japanese invasion.” Yet, at the same time, teenagers of the time, including Mr. Alt, enjoyed the fantasies from Japan, beginning with video games, the handheld precursors to portable games, entertainment in the form of manga, a range of complex toys and gadgets, and perhaps most importantly, the Nintendo entertainment system.

At the turn of the millennium, after working for the U.S. government as a translator, Mr. Alt and his wife cofounded Alt Japan. Co., Ltd., a localization company that specializes in helping Japanese creators translate their visions and words into English and other languages in order to market their products abroad. During the past two decades, Mr. Alt has noticed a changing trend. Japanese products used to be introduced to the Western world months after their release in Japan, often modified to be compatible with the Western context, but fans have become increasingly vocal, wanting fantasies as quickly as possible and as authentic as possible.

“Pure Invention” unravels how Japanese fantasies unwittingly changed Western dreams, and in this process, their realities. Mr. Alt tells this story through the lens of Japanese “it” products, ranging from the first hit product after WW2, a tin toy jeep made from junk tin scavenged from an US military base, the first karaoke machine, the first Hello Kitty product, the first Walkman, the first hit anime intended for adult audiences, video games, emoji, to anonymous online bulletin board systems. He calls these products “fantasy delivery devices” that changed the way Western people saw Japan and how they lived their lives. To be considered a “fantasy delivery devices,” a product needs to be an “it” product that was inessential but inescapable and influential (the three “ins”).

After the period of high growth, Japan experienced the burst of the economic bubble, followed by a period of entrenched recession and a host of social problems – a time looked backed upon as the “Lost Decades.” During this period, media coined various buzzwords, including “parasite singles,” “young adults,” “compensated dating,” “hikikomori,” and “otaku.” It was the beginning of the “freeter” economy, or what we call the gigeconomy today. The lost decades were also a time of political disfunction that saw a rise for cults, including the Aum cult. Japan had a head start in experiencing phenomena we have recently witnessed evolving in the Western world.

Japanese fantasies increased their power to reach out to the rest of the world. Beginning with the Family Computer, Nintendo goods swept the international market, with the manufacturer accounting for 80% of the game market. By purchasing Japan’s physical products, Western societies were consuming Japanese fantasies in increasing ways, and thus vicariously experiencing what was happening on Japan’s streets.

The 1990s were a time when Japanese schoolgirls set the trends. Pagers and “Printclub” photo machines that had originally been intended for salary people became communication tools for high school students. Schoolgirls pioneered the use of emoji as a new form of digital communication and disrupted the conventional karaoke system, changing it to a more user-oriented on-demand type of system hosting modern trends. Schoolgirls found ways to use devices originally designed for adults to make their lives easier in situations where they did not receive much guidance or supervision from adults.

Yet, one of the inventions most relevant to our times is “Channel 2,” the first anonymous Internet message board which allowed people to find their tribe. It quickly emerged as a cesspool of extremism, nationalism and other vulgar behavior, decades before similar phenomena occurred in the Western world. In the U.S., “4chan” had vocal alt right groups spreading conspiracy theories which turned out to have profound impacts on real life politics, including the 1996 presidential elections. The percolation or infiltration of Japanese fantasies occurred in American politics and American culture at large, and more recently in political campaigns worldwide. Japanese trends have become a global trend in the modern, interconnected, and politically tumultuous era that we find ourselves in today.

Following Mr. Alt’s insights on the intersection between politics and Japanese pop culture, Mr. Lee first referred to Mr. Alt’s observation that in Japan before and in the U.S. now, young people feel abandoned and are increasingly engaged in the reinvention of consumer products with far-reaching societal consequences. He asked to what extent these parallel developments were a reflection of Internet human behavior and of things that have gone wrong in the social structure, rather than being a Japanization of American tastes. Mr. Alt highlighted that what we are witnessing is that the Japanese trends that were once treated by the Western media as strange have in fact turned out to be common features of late-capitalism post-manufacturing societies that are in trouble. The Japanese schoolgirls of the 1990s had never intended to overturn the world order, but their collective consumer choices set the trend. This is similar to what we see with the Reddit group who massively transformed tools originally intended for investment and building up retirement accounts into financial weapons.

After discussing the difference between the American and Japanese ecosystems in terms of media uptake of online information, the discussion developed into Japan’s efforts to capitalize on global interests in its pop culture. Mr. Alt evaluated the official and corporate initiatives to internationally promote Japanese pop culture as the antithesis of what is actually considered “cool” by tastemakers. He also noted that Japanese tastemakers had initially not considered foreign markets, but when products were featured by overseas influencers and took off as lifestyle products, they became “fantasy delivery devices.”

Taking questions from the audience, Mr. Alt and Mr. Lee discussed the attribution of Japan’s soft power success abroad to geek culture, examples of Japanization of fantasies occurring outside the U.S., Japan’s unique ability to create compelling visual and narrative story-telling, and the emergence of Gachapon machines.