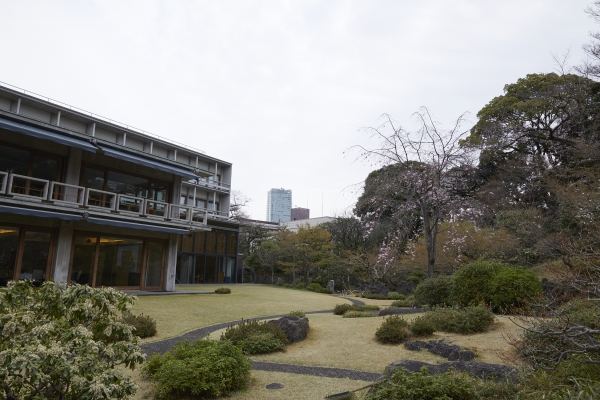 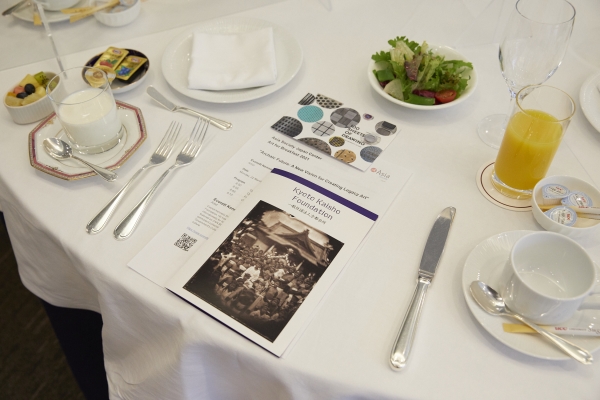 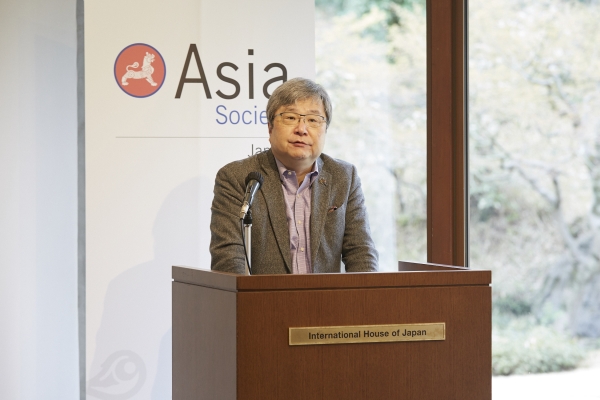 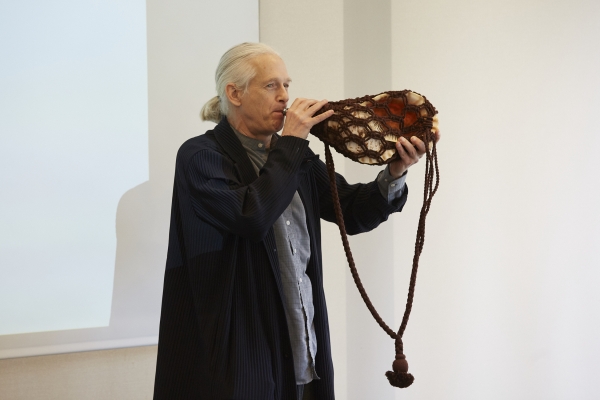 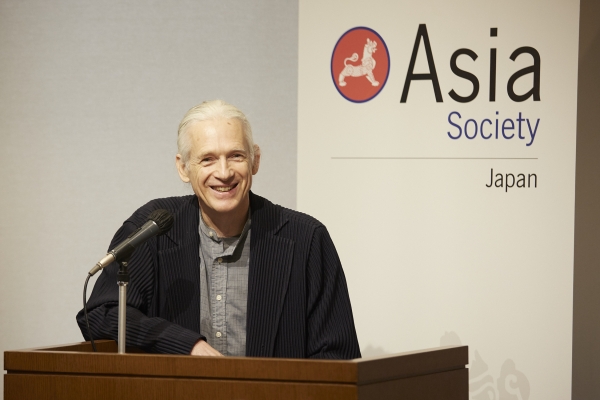 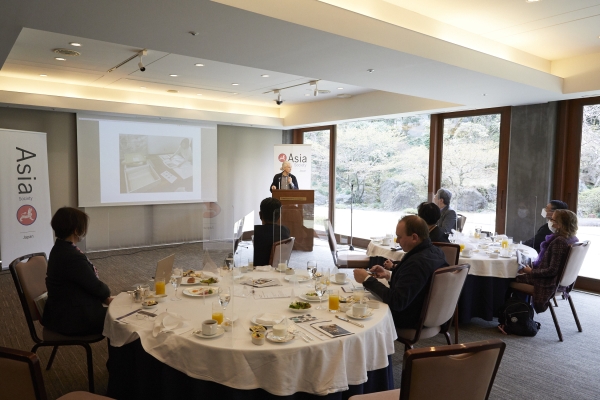 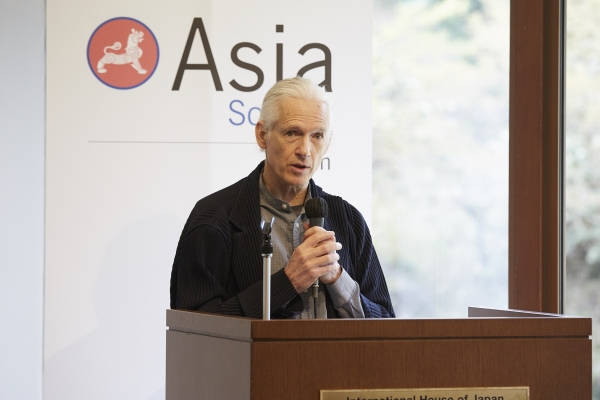 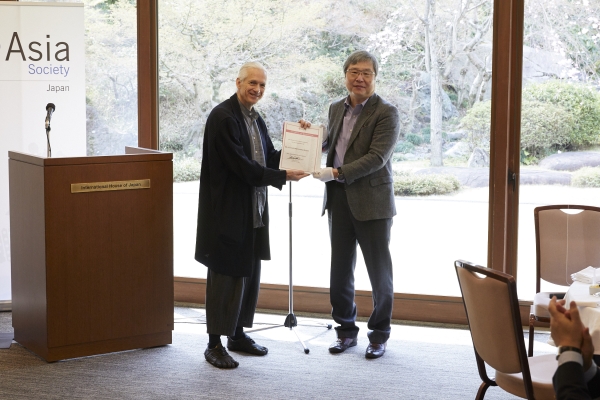 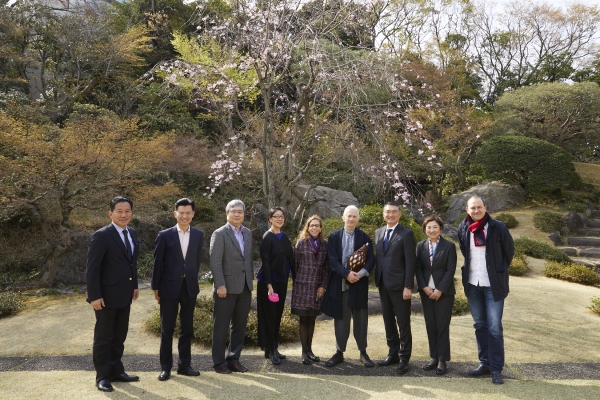 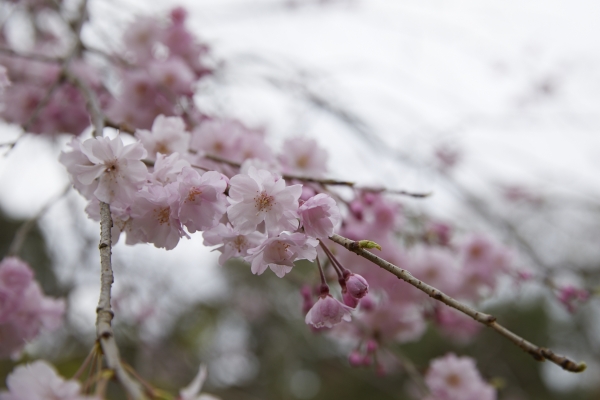 The experience of awe

Mr. Brown started his morning presentation by awing the audience with a short performance on his triton shell horn, a sacred instrument used by Japanese yamabushi mountain priests. Mr. Brown then began with an initial comment, “I have a confession to make. I am obsessed with the experience of awe.” Mr. Brown then explained how the triton shell’s reverberating sound is important for his work as an artist, giving him the opportunity to resonate with the genius loci of the landscapes he works with and to become aware of unknown elements of nature that connect him with his subconscious. “Isn’t that what art has been about since the beginning of time - experiencing awe?” 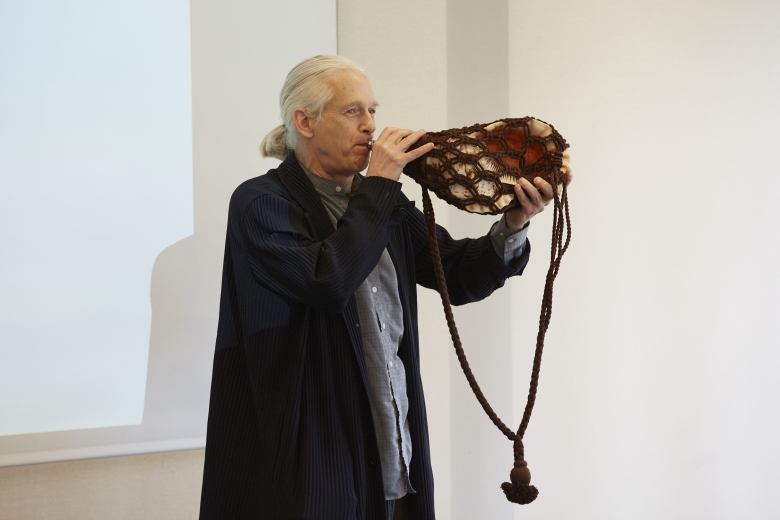 He then introduced the latest ongoing psychological research into the experience of awe. He cited studies into how awe reduces stress and increases a sense of well being, enhancing our sense of connectedness with other people and nature. Mr. Brown pointed out that the experience of awe also slows down our perception of time and allows us to see time from a deeper perspective.

As a writer of several books on history and cultural theory in Japanese, Mr. Brown then spoke about how people in the Meiji period had a great sense of curiosity about life, and how much of that curiosity has been lost now. He attributed this to the Japanese education system that trains 75% of the country's young people to have low self-esteem. He explained how low self-esteem decreases a person's ability to experience curiosity and the wonderful feeling of awe. Mr. Brown believes this is a critical issue for Japan and its future vitality. To address this issue, he is working with communities around Japan to develop local civic pride through his talks, workshops, exhibitions and creating images that inspire a sense of awe about the local environment. 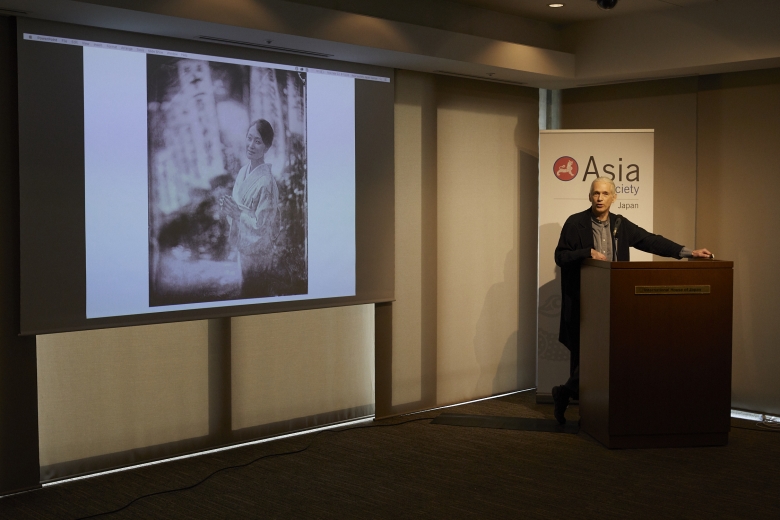 Mr. Brown uses a classical photographic process from the mid-19th century called wet-plate collodion photography. He makes his own glass plate negatives, which he uses like a painter uses canvases, adding different chemicals to the plate for remarkable effect that takes his work into the realm of painting. Mr. Brown introduced one of his art works, titled Wind that used chemical stains to explore what wind would look like if we could see it with our eyes. He explained how it sometimes takes several days and many negatives to get the effect he is seeking. Mr. Brown then shared another awesome image of a sacred island that he described as being “born out of a moment of serendipity.”  Before making the image, he had been thinking about the old Japanese mariners who could navigate by the stars in daylight. When preparing his glass negative, drops of rain accidently landed on the glass plate. Common sense told him the negative would be ruined, but he went ahead and made the negative. When developing the image of the island in his portable darkroom he was surprised that where the raindrops hit the glass plate, they formed dots that looked like stars in daylight on the final image. He added that using the triton shell opens him to an intuitive level where such experiences of serendipity occur more often.

Connecting with the past

Mr. Brown uses his art making process as a tool to reconnect with the past. He then explained his obsession with history, which he sees as not only as the past, but history’s connection with the present and future. His dialogue with history began more than twenty years ago when he was on his way to the Amazon with his large format camera to make images of the indigenous people. While staying with friends in Rio de Janeiro, he became fascinated by the local botanical garden and visiting the gardens every day for a week he ended up shooting all his film that he had intended to use in the Amazon. His time in the garden allowed him to dialog with another part of his self that seemed to be reaching out to him from a distant past. He recalls that it was like encountering a past life in which he was an 18th century plant hunter. This became an obsession over the following five years, in which he visited historical botanical gardens worldwide in the most remote places. 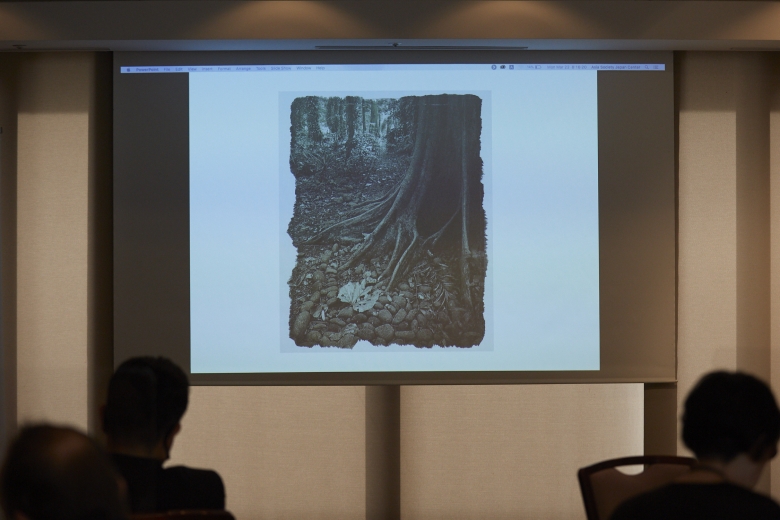 One of the reasons that Mr. Brown uses a photographic process from the mid-19th century is that it gives him a perspective to look at Japan. The early Meiji period was a major transitional period in Japanese history that allows him to look back before the Meiji period and to look forward to see how Japan has changed sense then. This perspective informs his work with a deep historical narrative.

Mr. Brown is a distant relative of Eliphalet Brown, the photographer who arrived in Japan on the black ship with Admiral Perry. Mr. Brown has a troublesome relationship with his ancestor and his images, to the extent that there was a short period in his life when he desperately searched for ways to travel back to the nineteenth century to re-photograph Japan. Mr. Brown had a tailor make him 19th century clothes and found Meiji era maps. He then travelled around in his 19th century outfit, searching for portholes to the nineteenth century. These images became his first museum exhibition.

Growing out of this phase, Mr. Brown found great potential in the collodion process for the exploration of Asian aesthetics. The tonality of the process and chemical stains offered new possibilities that went beyond ordinary photography.

Early in Mr. Brown’s career he was inspired by the techniques of Nihonga painters, and later collaborated with traditional artists, including a 25th generation Ikebana master on an important series of images in the gardens of Sankei-en in Yokohama. These experiences deepened his feel for Asian aesthetic elements. One particular element often explored in his work is the concept of omokage, the lingering ambience of the past. Much of his work, even now, is devoted to exploring omokage.

Mr. Brown went on to introduce the visual language he uses in his works, for example the concept of “Shin-Gyo-So,” which is central to traditional Japanese arts and culture. He explained how this was an introductory guideline to understand the aesthetic elements he is exploring in his work.

While Mr. Brown was producing a series of images on 3.11, including the tsunami and the effect of radiation in the Tsunami region, he experienced a psychological crisis, or awakening, in which he had a vision of the earth opening up. He was able to look down into the crevice of time and see, feel and seemingly touch all of the different periods of Japanese history. This experience continues to deeply inform his present work of deconstructing the history of Japan. 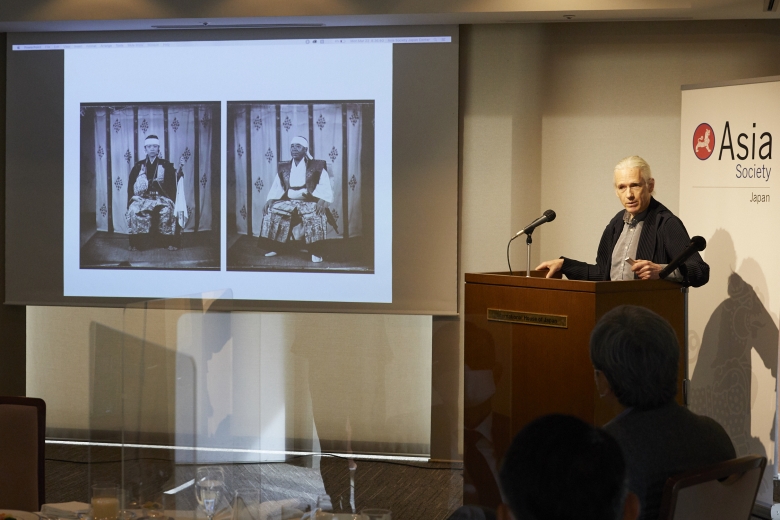 While he was in the Fukushima area, he was commissioned by Soma Michitane, the patriarch of an ancient Samurai family to produce a series of images of the local people to help sustain the samurai tradition in the Soma region. He created archival prints of the people he photographed and presented these portraits to each individual to become part of their family history and also community archive. The images became a reminder of their tenacity of spirit that enabled them to survive the tsunami and nuclear crisis. These images were exhibited in his first solo show in New York and became a book, Japanese Samurai Fashion. Japanese Princess Akiko wrote the Forward to the book.

The Soma project was the start of his work to make portraits of Japan’s ancient families. Mr. Brown recognized that these families offer a very important message about lineage and heritage that can inspire fresh dialogue about how each of us is a participant in creating history. This inspired Mr. Brown’s second book, Archaic Future, which focuses on the land of Izumo, home too much of Japanese mythology. Mr. Brown was surprised by how memories of the ancient past still influence the hearts of the people. A local historian told him the temperament of the Izumo people is based on the remorse in their hearts for having lost their kingdom in a battle with the Yamato clan more than 1400 years ago and the longing they have for the lives they lived before losing that battle. This fascinating story deeply informs Mr. Brown’s continuing work to deconstruct the history of other regions of Japan. 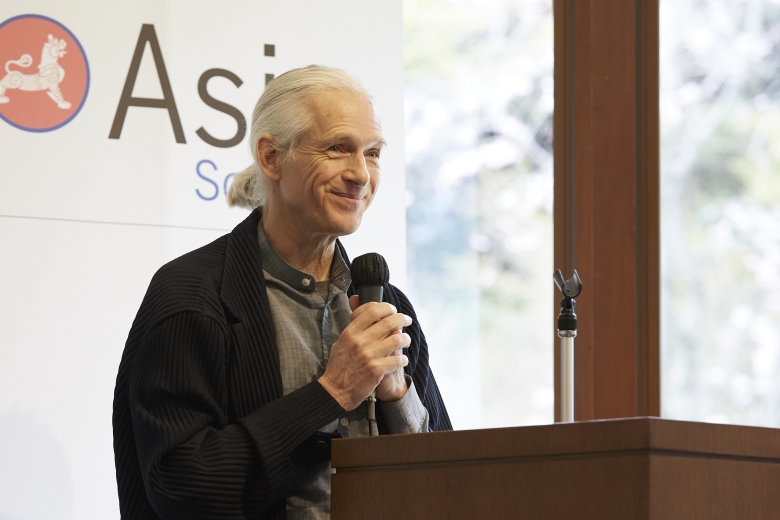 In conclusion, Mr. Brown shared what he sees as a cultural revival currently occurring in Japan. He explained this with various images, including a portrait of a high school student in Shimane, a performer of the local kagura trance dance tradition who devotes his life to his trance dance. Mr. Brown has encountered numerous young people around Japan who are attracted to old currents of Japanese culture that are in the midst of revival. He stressed how important it is that we seek out and support these young people who are being called to carry the old traditions of Japan into the future. Mr. Brown pointed out that they are creating a “nostalgic future” that can be wellsprings for future Japanese vitality.

Following Mr. Brown’s fascinating talk, the audience was invited to ask questions. Some topics covered in the discussion were his ongoing activities at the Kyoto Kaisho Foundation; the nexus between experiencing awe and connecting with the ancient past; how the pandemic has affected Mr. Brown’s projects; his plans for future projects, and balancing our modern urge to be freed from our ancestry, with our longing to connect with our past. He also spoke about his challenges and the key to success on his plans to build a Zen art residency program in Fukui Prefecture, two hours from Kyoto.