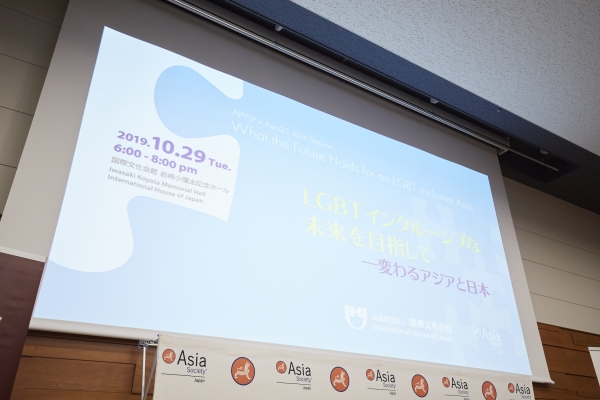 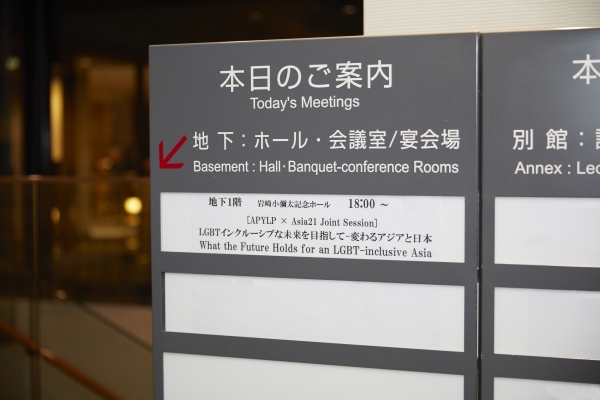 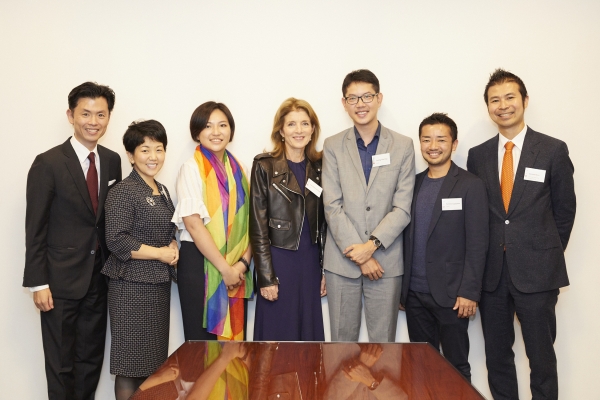 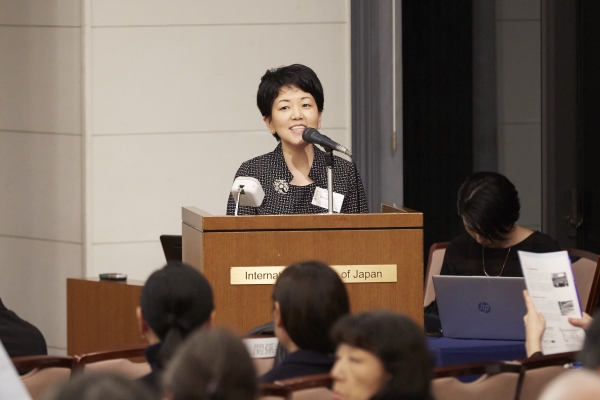 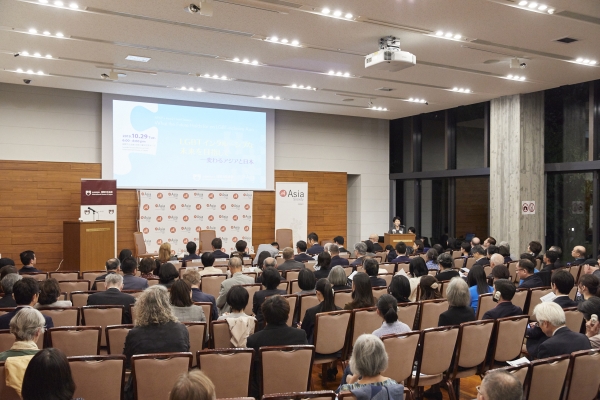 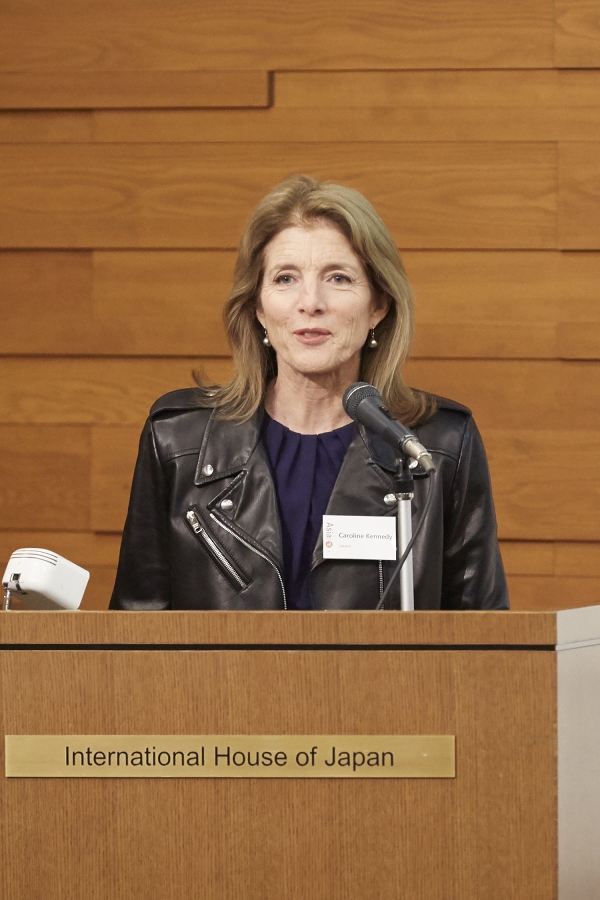 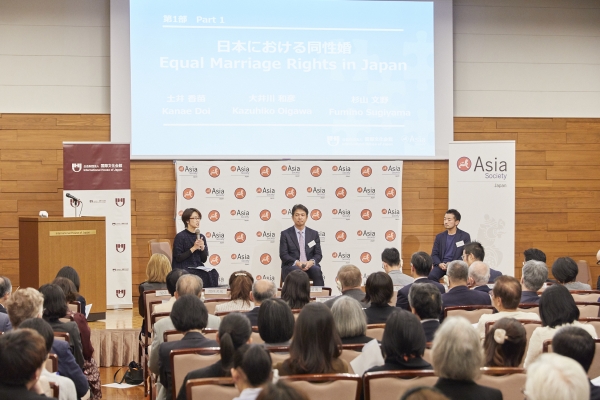 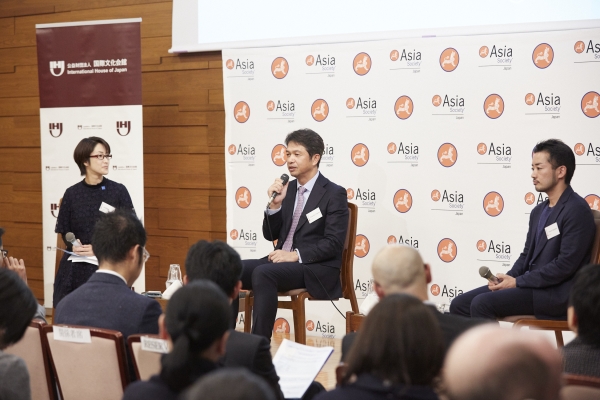 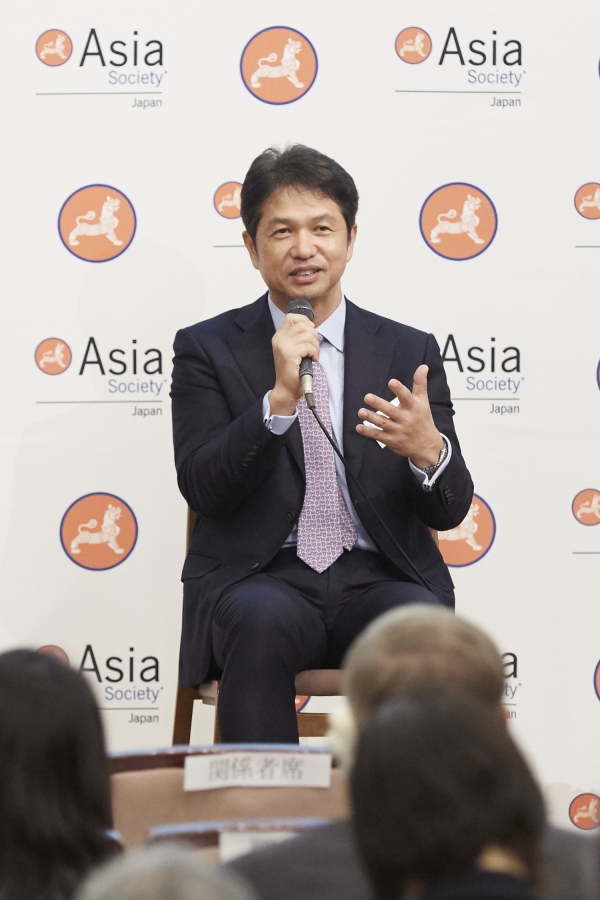 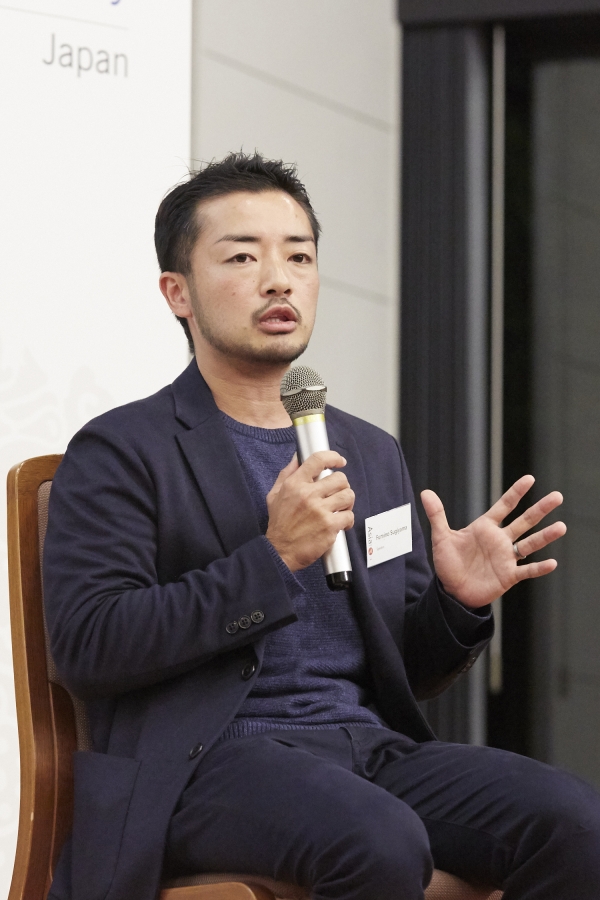 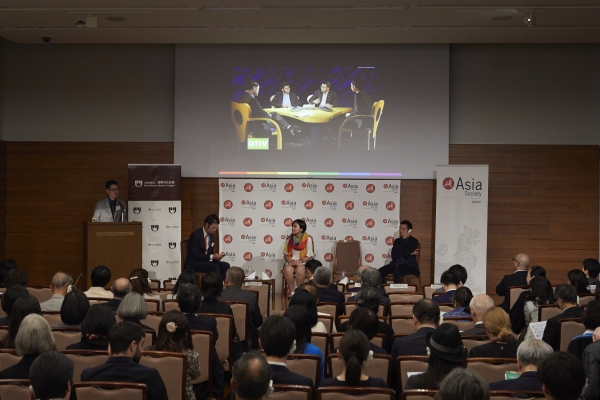 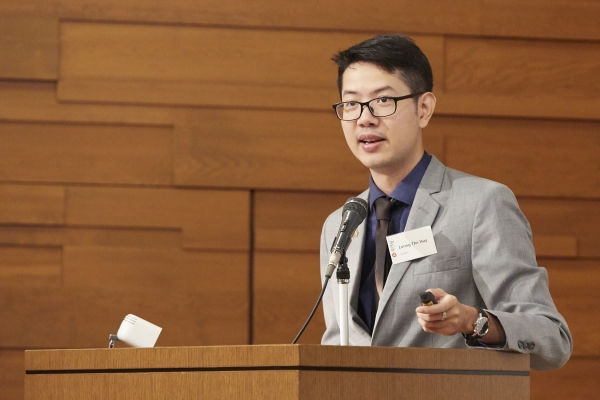 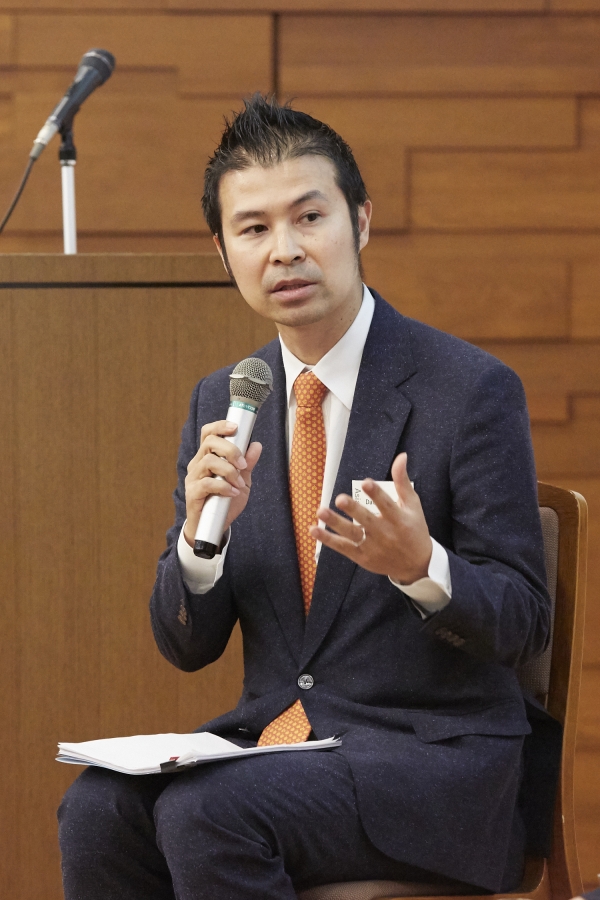 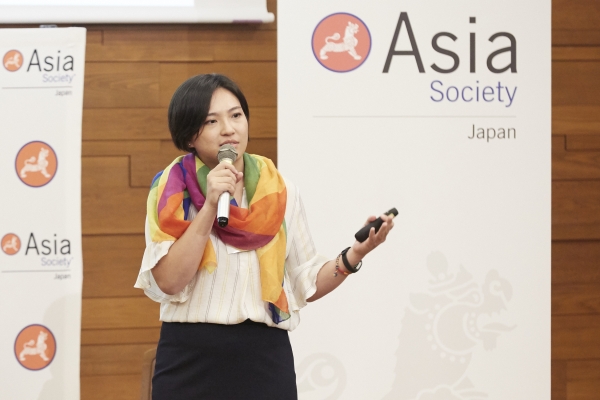 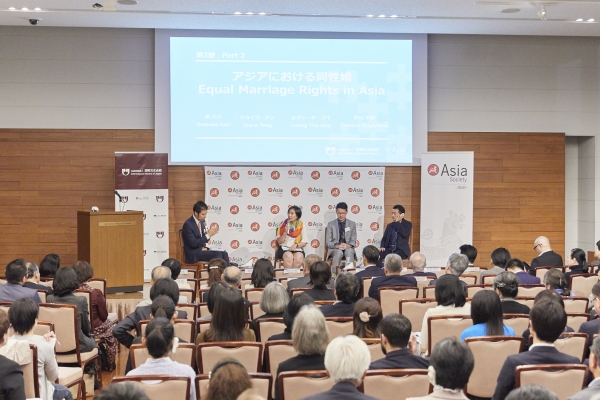 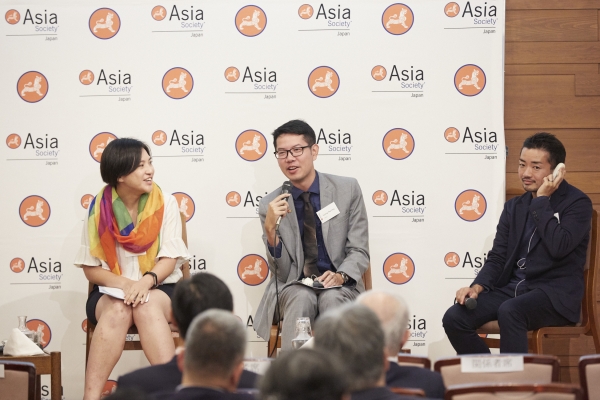 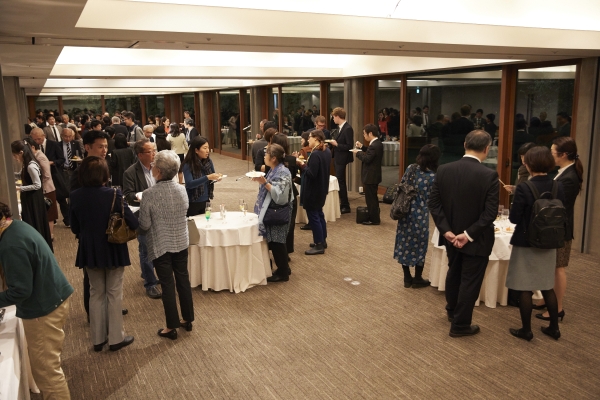 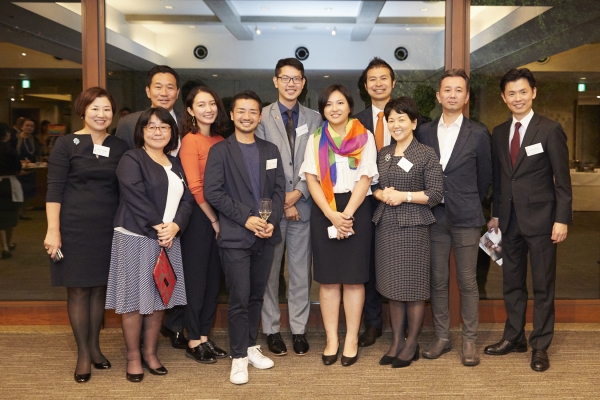 The second APYLP and Asia21 joint session, "What the Future Holds for an LGBt-inclusive Asia" was held on October 29, 2019.  We were honored to invite Ambassador Caroline Kennedy (Trustee, Asia Society) opening the session with a special remark of the LGBT movement being  the civil rights issues of our time.  The courageous people and the inspiring and committed efforts of LGBTQ activists to bring change and who have led to great progress all over the world as well as in the Asia region.  She noted, "This history of struggle and progress in both our countries teaches us once again that individuals have the power to change the world . It shows the power of courageous citizens who join together to demand the rights and opportunities to which we are all entitled. And it shows that we can never give up in working to make the world a better place ."   Inspiring way to start off the two discussions.

Mr. Sugiyama pointed out that the significance of same-sex partnership certificates lies in its impact on society - a group of people who everyone had pretended not to exist came into being because the government gave them recognition. Now, LGBT are members of society that must be considered in all policy measures.

What were the hardships in introducing same-sex partnerships?

Having worked for a foreign firm, it was natural for Governor Oigawa to have LGBT colleagues. Since same-sex partnership certificates had already been issued in Shibuya and Setagaya, he had thought that it would be effective to be the first prefecture to adopt the program and to attract LGBT people to Ibaraki, which is challenged with a declining and aging population. However, he was challenged with more obstacles than he had expected, and so he started by launching a task group and raising public awareness. Despite threats against his political career, he succeeded in adopting the program in July 19.

Mr. Sugiyama commented that he had been was impressed by Governor Oigawa’s leadership when he said that “human rights comes before public understanding.” LGBT people are challenged with real issues, while those opposed to the idea of welcoming LGBT people in society tend to be obsessed with “notions.”

How do you see the first four months since adoption?

Twenty couples have acquired certification. We have seen some new social developments, including their being able to receive family services at hospitals and in public housing, as well as family discounts offered by private companies. The fact that it is a prefectural initiative is powerful, and it has been proven that established facts can indeed make change.

Mr. Sugiyama commented that in Shibuya as well, thousands of complaints were filed with the ward government at the dawn of the campaign, but once the program was introduced, no one raised their voice against it. This kind of policy will increase happy people, but are not designed to create unhappy people. Although same-sex partner certificates are not accompanied by legal rights they gave a voice to those who had no voice. Governor Oigawa added that prefectural authorization has a large impact on society and conservative families came to feel more confident and open to accept LGBT children’s sexuality.

What are the prospects of this movement spreading to other prefectures or to the national level?

When such initiatives are taken at the prefectural level, they tend to become targets of partisan dispute; and therefore it would be more challenging in conservative non-urban areas. Leadership is key to inviting other prefectures to join Ibaraki Prefecture and there are no legitimate reasons to oppose to this cause. It is also important, especially for leaders, to get to know LGBT people in person to overcomes any biases and to correctly understand their issues. On the other hand, it is essential for LGBT people to find their voice.

In 2013, I appeared on TV and came out about my sexuality before the whole nation. The LGBT movement in Vietnam is a fairly young movement, but in a relatively short period of time, has pushed for and achieved remarkable changes within the LGBT community, the legal framework and society in Vietnam.

Vietnam had never criminalized homosexuality or transgenderism, yet had never enact specific provisions using terms such as sexual orientation or gender identity. When two women in a small city in Vietnam came to the authorities to apply for a marriage license in 1998, they were refused, not because same-sex marriage was illegal, but because the authorities could not accept it as a fact. In 2000, Vietnam adopted the revised Law on Marriage and Family, which explicitly banned same-sex marriage. In the early 2000s, LGBT people in Vietnam kept a low profile and only connected anonymously through online forums. LGBT people were often referred to as being “unnatural,” “a mental disorder,” “social evil,” “Western influence,” or “morally wrong.”

When the Vietnamese government announced their plan to revise the 2000 Law on Marriage and Family, in 2012, iSEE launched an online social campaign "I Do" to call for support of marriage equality. We asked people to take picture with the message of equal love and equal marriage. We enjoyed the support of many public figures and less-heard minorities groups like people with disabilities, elder people, street workers, etc. also stood up to support LGBT rights. Social discussions have are become more positive, with the topics shifting to better reflect the real stories and experience of LGBT individuals in Vietnam. “The law now is a boarding train to the final destination of Land of Happiness and Equality. The train still has a lot of space to carry more people, but gay and lesbian people are on the waiting list. It will take 10 years or more than that for the train to come back again. Would you say ‘All aboard!’ or ‘Some aboard!’?”

The law was passed in 2014, just changing the word "prohibit" to "not recognize." We did not succeed in our first attempt to fundamentally change the law, but with the next revision of the Law on Marriage and Family coming up in 2024, same-sex marriage will remain a top priority.

Our fight was not against people but against ignorance and the hesitation of people to accept new ideas. There is not only one definition of love, family, or tradition. We are living in a region of Asia where traditional norms and social harmony are usually prioritized against personal freedom. It is time to share a new pride of loving people for their differences. It may take us a very long time to achieve our goal. What matters is that we must start now, and never stop moving forward.

After the keynote speech, Ms Teng introduced the background of LGBT movement in Taiwan. LGBT movement in Taiwan dates back to as far as the 1990s, but in 2016, a coalition was formed among five NGOs supporting the movement. In 2017, when the Constitutional Interpretation was announced stating that everyone in Taiwan should have the rights o marry and be equally protected by law, an anti-LGBTQ referendum was raised. Since the referendum would return to Parliament, we engaged in lobbying, and in 2019, finally became the first country in Asia to legalize same-sex marriage. In Taiwan there are 2,100-2,200 married same-sex couples as of the end of September.

Ms. Teng’s communication strategies in the campaign has covered a broad range of tools. Before the referendum, Joyce as activist had been involved mainly in lobbying and advocacy, but she saw that grassroots campaigns built personal connections and advertisement helped reach the people she could not directly connect with. She highlighted that not only LGBT people, but their allies, including parents and children, Christian teachers, have supported the campaign. Stories have also been a powerful tool to change people’s minds.

Mr. Sugiyama introduced his strategy to involve more people in the annual Tokyo Rainbow parade, which had 200,000 participants in 2019, marking a significant increase from 4,500 in 2011. He introduced his positive approach to the silent majority – those who are not against the cause but do not consider it their own issue. He switched from just advocating human rights to inviting popular performers in order to attract people to the venue and enjoy themselves.

Until 2015, when Shibuya-ku decided to recognize same-sex partnerships, campaigns in Japan had been focused on visualizing LGBT people. The next phase to visualize LGBT issues, and now we are trying to find the solutions. In February this year, thirteen same-sex couples went to court, and in July the Japan Federation of Bar Associations issued a statement that denying same-sex marriage is a violation of human rights. The ultimate goal is not same-sex marriage but equal marriage rights for all.

The Vietnamese campaign is currently focused not on marriage equality but more on transgender rights. In 2015, Vietnam changed the civil code so that people had the right to change their legal identity, but there is ongoing debate on the requirements, including changing one’s gender with no requirement of medical intervention.

Transgender rights are about who you are. Mr. Sugiyama is a transgender man who still carries legal papers that say that he is female because he does not meet the legal requirements. The 2004 Act on Special Cases in Handling Gender Status for Persons with Gender Identity Disorder requires that a person: 1) is not less than 20 years of age; 2) is not currently married; 3) currently has no child who is a minor; 4) has no reproductive glands or whose reproductive glands have permanently lost function; and 5) has a body which appears to have parts that resembles the genital organs of those of the Opposite Gender. Some trans-people choose to undergo surgery and align their bodies to their identity, but this should be distinct from any legal procedures. Some people in Japan are also forced to undergo unwanted legal procedures, such as divorce, because same-sex marriage is not allowed.

The problem of not being able to change your family register unless surgical procedures are taken is a challenge faced in Taiwan as well. This has kept trans-people from employment and healthcare, and thus without the money to pay for surgery even if they chose to go through the procedure. Many people could only survive and live their identity in showbiz or at bars.

All panelists were in agreement that while marriage equality and transgender rights seem to be separate issues, they are closely interlinked and should be approached together.

Ms. Teng stressed the need to value diversity and to respect and support each other. Mr. Luong pointed out that when LGBT people campaign they are often referred to as asking for “special” rights or “new” rights. However this is untrue. Everyone deserves to be who they are; and therefore, the struggle is for basic rights. Mr. Sugiyama said that it was reassuring to it people could make themselves that they are an LGBT ally. When discussing diversity issues, it is also important to acknowledge that everyone can represent a majority or minority depending on the context.