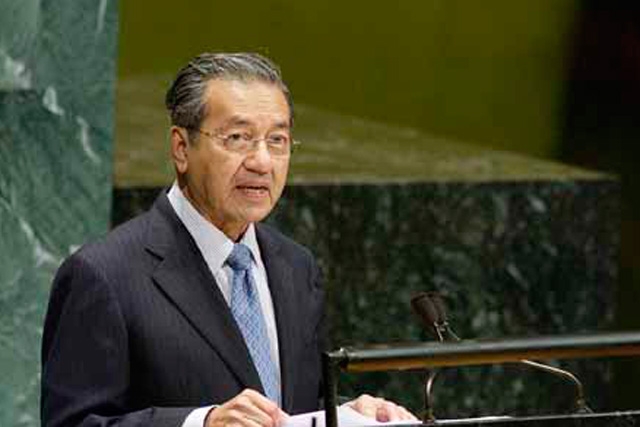 I have been asked to speak on Islam, terrorism and Malaysia's response. In the first place, I must insist that terrorism is not an Islamic monopoly. In Malaysia, for 42 long years we fought Communist guerillas which employed terror tactics in Malaysia to force the acceptance of the ideology. We defeated it.

We defeated it not just through military action but more by winning the hearts and minds of the people who supported them. Since the terrorists were ethnic Chinese, we identified the causes for their disaffection and remedied them. The result was a swing in favour of the Government and we eventually put an end to Malaysian terrorism.

One can say the same of terrorists anywhere including those who are Muslim by religion. Islam does not promote terrorism. Islam is a religion of peace. But when Muslims feel they are being oppressed, they are not getting a fair deal, then Muslims react very much like the ethnic Chinese in Malaysia reacted.

While we must condemn their acts of terror we must strive to understand the reasons for their anger and their reactions, irrational though they may be. We have to understand if we are going to tackle the problem.

The terrorists of today are not wild-eyed, illiterate fanatics who merely obey the orders of their evil leaders. They are educated, well-off, normal people with wives and families to love and look after. We cannot know they are terrorists until they have committed their horrible crimes. Their known leaders and their group may be eliminated but until the causes are removed there is no guarantee new groups will form to commit acts of terror.

And so while we fight against the known or suspected terrorists we must eliminate the causes.

Secondly, many Muslims are involved in acts of terror simply because presently Muslims and the Islamic countries are being oppressed most. In Bosnia-Herzegovina, Palestine, Iraq, Somalia, Sudan, Libya, Iran, India and Chechnya, it is the Muslims who are the injured parties. In fact their terrorism is their reaction to what is to them acts of terror against them. But we are given the impression that Muslims are natural terrorists, that Islam advocates irrational acts of terror. But Islam is against the killing of innocent people, which is, in the final analysis, what terrorism is about.


If Muslims commit acts of terror, it is because their countries are weak and incapable of fighting back, of waging formal wars on their enemies. And so terrorism by Muslims is more common than by others. If there are Muslim countries as powerful as their enemies, they would be bombing and rocketing regardless of what is now referred to as collateral damage.

Clearly Islam the religion is not the cause of terrorism. Islam, as I said, is a religion of peace. However through the centuries, deviations from the true teachings of Islam take place. And so Muslims kill despite the injunction of their religion against killing especially of innocent people.

If you look at Christianity you must admit that being thrown to the lions by the Romans did not prevent Christians when they achieved power from being totally intolerant of those who did not accept Christianity. During the Spanish Inquisition suspected apostates were burnt at the stake after mock trials. In fact many who are in America today are descended from Christians who had fled from terror perpetrated by other Christians. And the Jews in America are the descendants of the Jews who fled the regular pogroms in European countries, especially Russia, and of course the persecution by the Germans under Hitler.

Islam had in fact been more tolerant. The Jews chose to migrate to North Africa together with the defeated Muslims after Ferdinand and Isabella completed the reconquest of Spain. To stay back meant forced conversion to Christianity or pain of death. Even after conversion they remained suspects and were persecuted.

The Muslims were well disposed towards Christians in particular. When the early Muslims were persecuted by the heathen Arabs, they sought refuge in Abyssinia, a Christian country with a Christian king. They were well treated there because the Christians realised they worshipped the same God and recognised not only the prophets of the Christians but those of the Jews as well. The Muslims venerate Musa or Moses, and Isa or Jesus as their prophets along with Adam, Abraham, Jacob and others.

They differ from the Hebrews and the Christians because they believe that at the time of the Prophet Muhammad, the Jews and the Christians had deviated from the true teachings. But then you must remember that Martin Luther and others too accused the Christians of their times of deviation from the true teachings and founded their own creed or sect in protest. So the Muslims' attitude towards Christianity is not much different from that of the various Protestant sects. In the past Catholics and Protestants were violently intolerant of each other.

In Malaysia we have a truly incompatible mix of Hindus, Buddhists and Taoists, and Muslims, with a small Christian minority thrown in. Strictly speaking we cannot even sit at the same table to eat. Muslims violently object to pork, which the Chinese love, but Muslims love beef, which the Hindus do not eat. But we can and we do sit at the same table to eat because we are sensitive toward each other's sensitivities.

In Malaysia Muslims, Hindus, Buddhists and Christians live together, work together and play together. In 1969 there were so-called racial riots but the basic cause was economic rather than racial or religious. Once we reduce the economic disparities we were able to live in harmony with each other. Having a Muslim minority has not been a problem in Malaysia. Such is the harmony achieved by removing economic disparities that the recession, due to the financial crisis, failed to explode into religious or racial riots as happened in other countries.

Now there is an attempt by a small group of Muslim Malays to mount a violent struggle to take over the Government of the country. They are almost all young members of the opposition Pan Malaysia Islamic Party. These young people do not believe that democratic elections would ever bring their party to power so they can install their version of an Islamic country.

The majority of them are religious students who went to Pakistan ostensibly to study Islam. Instead they were taught that the Malaysian Government is not Islamic and it is their duty to overthrow it by violence. Trained by the Taliban and Osama's people they returned to Malaysia to carry out their revolution.

In Malaysia they killed a Christian State Assemblyman, tried to steal arms from a police station, robbed banks and exploded ineffectively a few bombs in odd places. But eventually they were tracked down and arrested.

We have dealt with the would-be Muslim terrorists with circumspection. The majority of the people of Malaysia, Muslims and non-Muslims, support the Government's action. We do not need foreign help or intervention. We are capable of dealing with any eventuality. The opposition Islamic Party knows this and they are unlikely to back violence. However if they break any of our laws, the fact that they are in the opposition will not prevent Government from enforcing the laws on them.

Malaysia can claim to know how to deal with terrorists, be they Muslims or non-Muslims. We have been successful so far and we believe we can successfully handle future problems. In fact we think that we can be of help in dealing with modern terrorism elsewhere. I am sure our approach is more likely to be successful than the brute force that is being applied now. We know the people we call terrorists may be regarded as freedom fighters by others. Even today terrorists are regarded by their own people as noble freedom fighters. And of course terrorists like Jomo Kenyatta, Mugabe, Nujoma, Mandela are now acknowledged as legitimate leaders in their countries.

However, whether people are fighting a noble cause or not, there are certain acts which they may not perpetrate. Exploding bombs in public places and killing innocent people cannot be accepted. Holding civilians to ransom or as hostages cannot be accepted. Poisoning food, medicine or water supply cannot be accepted. These are acts of terror and anyone committing these acts must be regarded as terrorist by everyone, irrespective of the cause they are fighting for, irrespective of their religion, race or creed. And once they are defined as terrorists it is the duty of everyone, every country, to hunt them down and bring them to justice.

Malaysia's response to the latest manifestation of terrorism is not only to act against our own potential terrorists, but to seek to define terrorism and terrorists so that there is no ambiguity and everyone will be able to fight against them. We should not seek to avenge particular killings of innocent people. We should seek to fight all terrorists everywhere, and we should fight them not just by direct action but more by winning the hearts and minds of the people, so as to reduce support for acts of terrorism and to reduce the attraction of acts of terror for those who see no means of redress for their own sufferings.