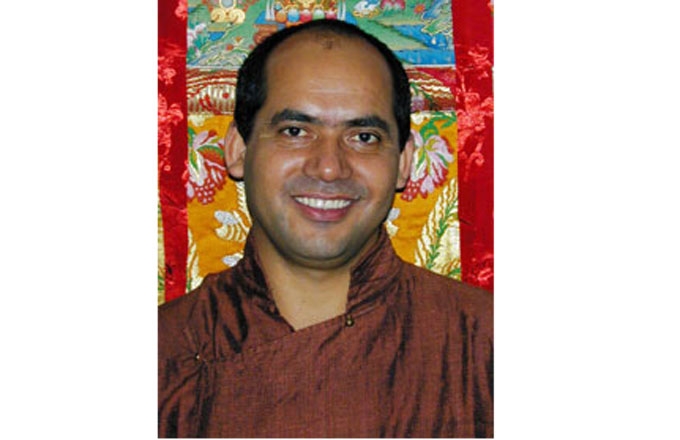 Geshe Lobsang Tenzin is one of a few individuals who have achieved the highest academic distinctions in both the Tibetan and the Western worlds. He holds a Geshe Lharam degree from Drepung Loseling Monastery in India, and a Ph.D. from Emory University in the U.S. His interdisciplinary dissertation focused on Tibetan and Western approaches to the emotions and their impact on health.

Geshe Lobsang has represented Tibetan Buddhism at numerous interfaith forums and conferences, including the Gethsemani Encounter, an historic Buddhist-Christian dialogue. He has lectured on Tibetan Buddhist philosophy, psychology, meditation and the mind-body connection in universities and institutions around the world. He has also served as expert commentator on Tibetan Buddhist art and culture at various events including two of the Smithsonian Institution's summer exhibits: "Tibetan Culture: Beyond the Land of Snows" and "The Silk Road: Connecting Cultures, Creating Trust."

He presently teaches at Emory University, oversees the training programs at Drepung Loseling Institute, and leads meditation retreats and workshops on a regular basis. Asia Society spoke with him about the significance of the sand mandala and the basic principles of constructing one. Tibetan Monks from Drepung Loseling Monastery, South India, will construct a mandala sand painting in Asia Society's Aron Gallery over a ten-day period to commemorate September 11, 2001.

Where does the sand mandala tradition originate? Can you explain the creation of the mandala as a practice within your tradition?

The Buddhist sand mandala originated with Tantric Buddhism going back probably 2000 years in India. Tantric Buddhism was introduced in Tibet in the mid-7th century and from there Buddhism became the practiced religion in Tibet where all aspects of Buddhism, including the mandala sand painting and the meditations associated with the mandalas, became part of the spiritual tradition in Tibet.

What is its significance and has it transformed with modern times?

The mandala is understood as the divine world consisting of the central deity and its residence and environment. The original purpose for making the mandalas was to introduce the trainees to a specific deity meditation and practice. For that purpose, sometimes three-dimensional or two-dimensional drawings with sand or even on canvas are created. The paintings were made to provide an aid to the trainees so they can visualize the three-dimensional mandala with its deities and other features. The making of the mandala with sand became quite popular because there are certain Tantric traditions such as Kalachakra that require the building of sand mandala paintings to confer the initiation into that specific deity practice.

The significance hasn't really change that much. But in present times, Tibetan monks have been making mandalas not strictly in the context of an initiation ceremony but also for tours in the West, making mandalas in museums and other places together with prayers and meditation for healing and peace.

What are the steps involved in making the sand mandala?

The sand mandala begins with an opening ceremony where the monks do some meditation, chants, and rituals to prepare the site. It's a Buddhist idea that before making a sacred symbol like the mandala you need to select the site and then examine it to see whether it is a suitable place or not. Then it is important to acknowledge the other beings that are invisible to our eyes who might also occupy the space and obtain their consent. Then the place is blessed to make it conducive for creating the mandala sand painting.

Once that ceremony is concluded, the monks begin the mandala by drawing the basic outline, which could take a couple of hours. Then they begin pouring sand from the center outwards and that can take many days depending on the size and intricacy of the design.

When the mandala is finished, often there is a consecration ceremony so the mandala is seen as the actual abode for the deities. Prayers are recited in the place and traditionally the empowerment would be conferred by a Lama who gives the initiation. Students are led through many steps of visualizations and meditations for cultivating certain attitudes and mind sets. Then when this empowerment is conferred, the purpose of making the mandala as a basis for the deities to reside, as well as a visual aid for the trainees, is accomplished, and therefore the mandala is dismantled. There is a dismantling ceremony at the end where the monks, with meditation and chants, request the deities to depart to their natural abodes. These wisdom beings are the actual deities that have come. The commitment beings, the beings that are visualized before invoking such wisdom beings, dissolve into oneself. Symbolically, when dismantling the mandala the monks pick up sands from different parts of the painting, which are seen as the deities, and put the sand on top of their head to symbolize the dissolution of such enlightened beings into oneself. The sand is then collected and given to the audience as objects of blessings.

The rest of the sand is taken to a flowing body of water. There is a brief ceremony to invoke what are known as naga spirits. Naga spirits are the living forces associated with the water elements. When you invoke them and offer the healing sands, they find healing through receiving this sand. Offering it to the water, being the source of fertility and growth, makes their forces become healthier and energized and therefore water can reach the great oceans and spread the healing sands all over the world. Healthier waters promote growth. It is a symbol for sharing the prayers and blessings with the whole world.

How are the designs of the sand mandala determined? Are there particular symbols that are always used?

Mandalas are the abode of the deities as well as the deities themselves. They're often derived from the visions of great meditative masters so in making the mandalas, there are very specific instructions and steps that one has to follow in accordance with the scriptures. There is really not much room for the spontaneous creativity of the artist because the symbols are very specific and are based on ancient understanding of symbolism. But there are some elements in the mandala that I have heard allow the artist some freedom to make it as elaborate as they want.

There are many different symbols in the sand mandala. The very center depicts the actual deity, which can be done with a drawing of the actual deity, or symbols associated with that deity, or a syllable, known as the "seed" syllable. It depends on what they choose to draw in the center. Very often one would draw symbols such as a vajra, which is a Sanskrit term. For example, the vajra is drawn for the deity of Akshobhya, associated with unshakable resolve. Akshobhya Buddha is translated to mean an unshakable victor and this is an enlightened quality embodying the resolve in the midst of crisis and negativity. Vajra is the symbol of an indivisible state of wisdom and bliss. In the Tantric tradition, an enlightened state of mind means reaching an indivisible state of bliss and the wisdom of emptiness.

Can you give some background on the Drepung Loseling Monastery?

The Drepung Loseling Monastery that the monks come from now was relocated in South India, in the state of Karnataka. It was reestablished in Karnataka in 1969. Originally the monastery was established in Tibet in 1416, near the capital Lhasa. This was one of the biggest Tibetan monasteries and at its zenith it had about 10,000 monks in training. But in 1959, when the Chinese invaded Tibet, thousands and thousands, including this monastery, were closed. Many of its monks were imprisoned or killed. A few hundred managed to escape into exile in India and that is where they gathered for ten years in Eastern India in a place called Buxadura. They continued with their traditional contemplations and religious studies. Eventually the Indian government found places for Tibetans to resettle. Camps were formed in South India and eventually monks moved and built their monastery.

This monastery in South India has now about 2,500 monks. Back in 1988 the monastery sent a group of monks to share Tibetan sacred arts and culture with the West so they traveled on a Mystical Arts of Tibet tour. As a result of that, someone offered a piece of land in Georgia, not far from Atlanta, to build a meditation center and monastery. So in 1991, the Drepung Loseling Insititute, as a seat of that monastery, was officially established in Atlanta.

What is the mission of Mystical Arts of Tibet?

Mytical Arts of Tibet has been an ongoing tour since 1996. Before we had been on a few tours but not every year. The tours have three basic purposes. Firstly, to promote peace and healing in the world by performing Tibetan sacred arts, chants, and prayers. Secondly, we hope to raise awareness about the current Tibetan situation in hopes that increased awareness will result in some peaceful resolution in Tibet. Thirdly, to raise much needed funds to provide the basic needs and education for the ever-increasing monks at the Drepung Loseling Monastery as well to raise funds for other Tibetan institutions in India.

Do you feel that American understanding of Tibet and Tibetan Buddhism has grown significantly?

It is absolutely growing. The awareness about Tibet has changed dramatically. Back in the late 1980s when we made our first tour, there were many places where people had no idea where Tibet was or basic principles of Tibetan Buddhism. But now I think there is a tremendous amount of awareness about Tibet and basic understanding of Buddhism. Clearly meditation has become so popular in the US, even within the scientific communities. Not just the Buddhist forms of meditation are studied. But there certainly have been many studies specifically on Tibetan Buddhist meditation and its benefits for health and well-being. So for various reasons, I think there is a tremendous interest in contemplative Eastern traditions.

This Sand Mandala event at the Asia Society is a gift to New York City. What message do you want to send on this two-year anniversary of September 11?

It is a gift for New Yorkers, but also for all Americans on behalf of Tibetans. Our purpose is to create this mandala with prayers for peace and protection. We would like to convey that Tibetans really feel the pain of so many of the victims no matter where these types of tragedies occur. Our hope in creating this sand mandala is that it will bring some benefit in terms of healing and peace for the people who died on September 11 as well as people who are still suffering their losses.