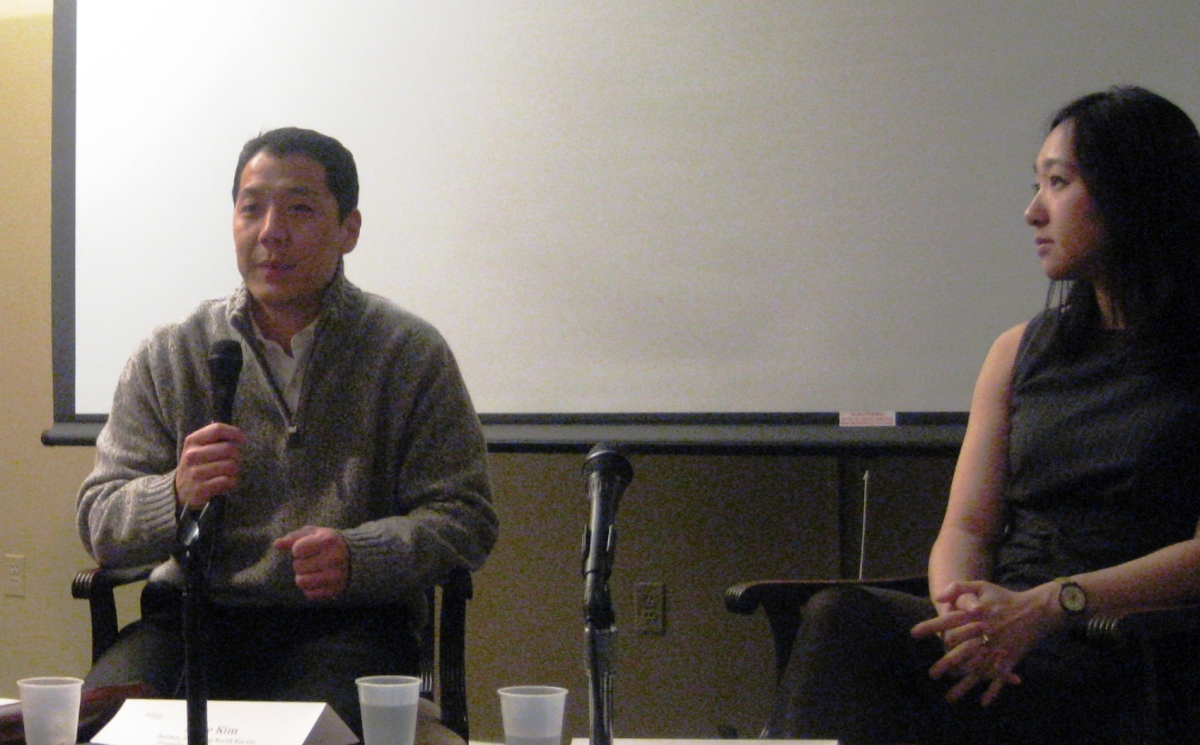 WASHINGTON DC, March 25, 2011 - The humanitarian crisis of human trafficking is a global problem, extending from North Korean refugees escaping through China to the hidden brothels of Washington, DC.

Mike Kim, author of the recently published book Escaping North Korea: Defiance and Hope in the World's Most Repressive Country, and Katherine Chou, President and co-founder of the Polaris Project, talked at length about this issue at the panel discussion "China's Underground Railroad" at Asia Society Washington.

Kim, who moved to China in the early 2000s, recounted some of the more harrowing experiences of the journey he took to help two North Korean women, one of whom had been a victim of sex trafficking, escape to sanctuary in Southeast Asia. He said that the issue of sex-trafficking was what first got him involved in the North Korean refugee crisis situation, and described the horrific stories of women being sold into brothels and forced marriages soon after being smuggled across the border to China. "As with all types of trafficking, rape and abuse goes hand in hand."

North Korean refugees are deported if found by Chinese authorities, encouraging many to use an underground railroad of clandestine routes and safe houses in order to escape. In trying to cross the border into Laos with the two women he was trying to help escape, Kim found himself confronted by border patrol guards. "In November 2004, I was in northern Laos standing in the back of a truck with six angry soldiers pointing their AK-47s at me." While he managed to escape and get the two women to safety, their experience highlighted the many dangers that North Koreans refugees face while passing through China.

Kim later founded the organization Crossing Borders, which seeks to provide humanitarian assistance to North Korean refugees, and spoke about the many challenges that the organization faces in trying to provide basic services. These can include the many health issues affecting North Korea today. As he said, "One of the challenges is that for people coming out of North Korea, malnourishment is tied to a lot of medical issues," adding that Crossing Borders lacked the funding to deal with the enormous cost of providing medical attention.

From a more local perspective, Katherine Chou described her work with the Polaris Project in combating human trafficking in the United States. She cited local examples of this illegal trade that were as close as massage parlors at Dupont Circle, close to the Asia Society Washington Center. Connecting with the presentation made by Kim, Chou said, "It is this market that is not only driving victims of human trafficking from North Korea, but is global and can be found here in the United States."

Chou became interested in this issue after learning that there were victims of sex trafficking as close as downtown Providence, Rhode Island, where six South Korean women were promised legitimate jobs, but ended up forced into prostitution once they arrived in America. "This massage parlor opened up my own perspective of human trafficking, particularly knowing that there are about 5,000 of these locations are in the United States."

Audience members responded to the speakers by asking why Washington DC area police aren't doing more about the local brothels Chou cited, and about living conditions in North Korea.