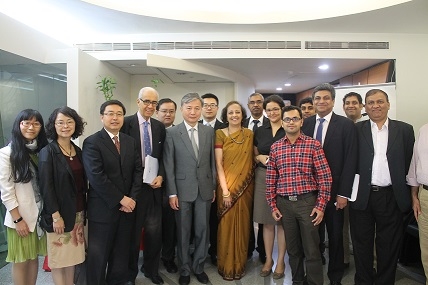 MUMBAI, 3 December, 2015 – Asia Society India Centre was delighted to host a workshop with a delegation from the National People's Congress of China (NPCLAC) which was on an International Study Tour of Public Participation in Law-making. In an interactive session, members of the delegation were able to glean knowledge about the various systemic institutions that aid the legislative process in India.

Members of civil society organisations, corporations, publications and banks among others had gathered to inform the discussion with the delegation. Many similarities in the legislative systems of both countries arose, while subtle nuances were elaborated upon. The delegation saw the presence of non-governmental organisations as one of the key attributes to India’s thriving democracy.

During the course of the discussion, many legislative features instituted by the Indian government were highlighted. Institutions such as the Right to Information Act or Right to Services Act make the legislative process more accessible to the common man in India, however, they need to be used more robustly. The role of the press was also highlighted.

In China, it was shared that similar systems exist, however, informal channels are used for consultative processes. On the economy, the delegation shared that in a country with an economic growth rate akin to China, opening the markets is inevitable. The workshop served as a learning for stakeholders of both nations and offered insights that are crucial to the legislative functioning of both nations.