A Walk Through Lahore with Risham Syed 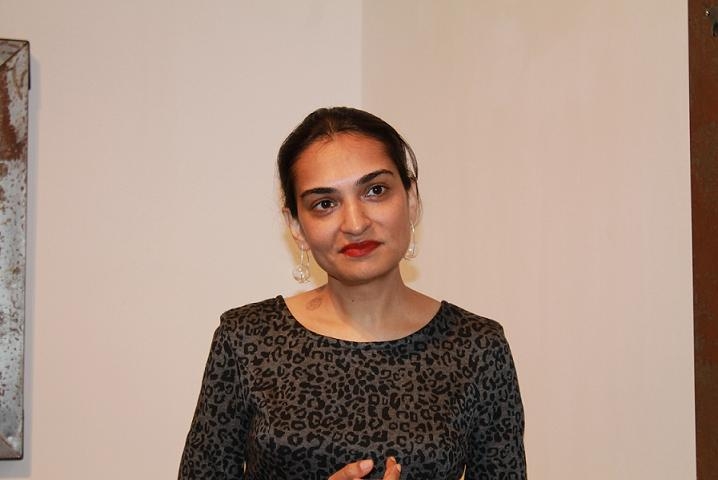 Following a brief introduction by Asia Society arts consultant Susan Hapgood, Syed started by speaking about her subject matter and the working process she uses to make paintings and tapestry compositions. In the body of artwork on view, all made during the past six months, she depicted scenes in the city of Lahore. In the paintings, she focused on incomplete development schemes and isolated construction imagery, where one façade of a building would be completely finished but the other three sides left blank. Syed took photographs of those buildings and made hyper-realistic, postcard-size works from acrylic on canvas, stretched on board.

Another body of larger tapestry works also spring from her photographs of Lahore public sites. Syed depicts cityscapes that evoke the turbulence and disorientation caused by current urbanization schemes, with incomplete worksites and dug-up foundations and roads left fallow, in preparation for overhead bridges, metros, and other projects. These tapestries were woven in China on a jacquard loom, a machine that was invented in the early 19th century and was one of the first machines to mechanize the handloom. Syed noted her interest in the pervasive effects of the Chinese post-industrial revolution on the global economy.

In the question and answer session that followed, Syed answered a question concerning the adverse misgovernance issues in volatile regions such as Lahore and Afghanistan by stating that the inconveniences these urbanization projects cause will be forgotten in due time when efficient transportation systems and infrastructure are established. She went on to discuss the time that goes into each of her paintings: typically, one painting would take her ten days to complete, but being a perfectionist, she admitted that every time she reopens a painting, she feels the need to add details and rework it.

Syed elaborated on her teaching experiences, too. She doesn't force her students to adopt a particular style of painting, but is relieved by the fact that since her students are in their fourth year of study, they have already developed their own styles. She also stated that there has been an increase in the number of Pakistani art students who prefer video art and digital media over painting. Syed revealed that while her small postcard-style paintings have been on display in Pakistan, her potentially controversial larger tapestries are yet to be exhibited there.