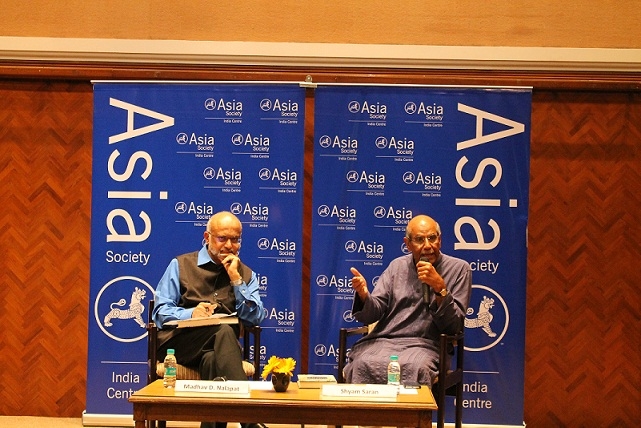 The discussion began with an analysis of India’s national identity. Saran observed that there is no single idea of ‘India’ - that by virtue of its location at the intersection of various caravan and maritime routes, India has historically been able to assimilate many different cultures, making it cosmopolitan and comfortable with plurality, which is an asset in today’s globalized world. Nalapat asked why no serious attempt had been made to define core elements of nationhood in India, Saran responded saying there can be no one idea because India is too diverse and heterogeneous, and trying to utilize a singular model of national identity would be counterproductive for a country as plural as India.

As the discussion moved towards foreign policy, Nalapat sought to understand the need for a substantial country such as India to follow non-alignment in its early years. Saran explained that it made complete sense for a country, only recently free from colonial rule, to avoid becoming subordinate so soon to another power. He also pointed out that the non-alignment policy nonetheless did not prevent India from forming and maintaining strategic alliances with certain countries, such as the USSR. This “strategic autonomy” has always been a goal of Indian foreign policy and one that successive administrations have tried to achieve and maintain.

Regarding India’s immediate neighbours, Saran opined that China has been India’s most significant foreign policy challenge till date (both in terms of being a threat as well as an opportunity) and is likely to grow in significance. Saran emphasized that there is much potential for cooperation between the two countries, recounting instances during his own career when he had witnessed this, such as during the Copenhagen climate change negotiations of 2009 or negotiations on general trade issues.