Seeing Through the Smoke: Exploring the Opium Trade 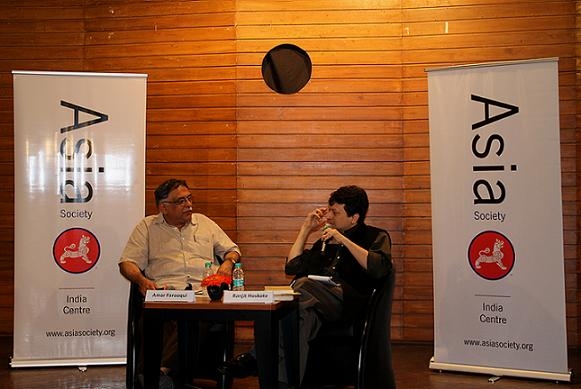 MUMBAI, January 7, 2014 — The story of the opium trade between colonial India and China is an exciting tale of a rampant commodity trade that dramatically changed the course of history. Trade in opium posed high risks and created opportunities for vast profits that raise questions of the morality of traders and the remnants of which remain highly visible in Mumbai today. The trade dramatically altered the fortunes of communities in India and China and relations between the two nations while also fueling the growth of international trade networks that spread all around the world.

To further investigate this captivating history, Asia Society India Centre presented a discussion between leading experts Amar Farooqui and Rajit Hoskote as a part of its AsiaLens series. Farooqui is a Professor of History at the University of Delhi and author of Opium City: The Making of Early Victorian Bombay, among many other works. Hoskote is a poet, cultural theorist, and current co-curator of the National Gallery of Modern Art Mumbai exhibit No Parsi Is an Island. The programme was presented in partnership with the NGMA to complement their current exhibit Across Oceans and Flowing Silk: From Canton to Bombay 18–20th Centuries.

The conversation was staged in front of a capacity audience fittingly situated in the NGMA auditorium, a building built with Parsi profits derived from the opium trade. Farooqui began with an informed account of the intricacies of the trade, detailing historic specifics and tying together the complicated threads that linked global trade. The dialogue extended to a deeper exploration of the cultural components of the trade. The speakers addressed the controversial morality of profiting from a fiercely addictive and dangerous drug and offered interpretations for the philanthropic activities of the successful Parsi trading community. Farooqui and Hoskote shed light on the history of opium trading that has dark and troublesome elements and traced the effects of this trade through history right up to the present day.