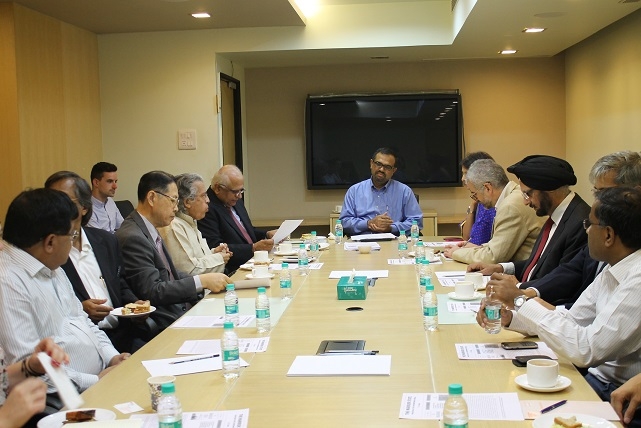 MUMBAI, 25 June, 2014 -- The Asia Society hosted McGill professor of international relations TV Paul as part of its Breakfast at the Asia Society India Centre (BASIC) series. Mr. Paul presented the arguments from his latest book, The Warrior State – Pakistan in the Contemporary World. Distinguished guests from the Mumbai journalistic, commercial and diplomatic communities converged on the India Centre’s conference room to hear professor Paul make his case in a small, intimate setting. Mr. Paul largely held a pessimistic outlook on Pakistan’s future, commenting that there would be little near-term institutional change as a result of Pakistan’s “geostrategic curse,” that its strategic location means that it receives considerable aid from great powers, and thus holds leverage over them with no incentive to alter its own policies. Pakistan exhibits a “hyperrealpolitik” outlook on national security affairs, and so thoroughly prioritised its military that other parts of the state, like civil society, languished behind.

After walking the audience through the major parts of his book, professor Paul engaged in a moderated off-the-record question and answer period with attendants, further expanding upon his thoughts for Pakistan’s future prospects.

This programme was part of our BASIC (Breakfast at Asia Society India Centre) Series, which brings eminent speakers from the fields of Asian business, arts, culture and policy to Asia Society Members and Patrons, and provides a senior-level platform for discussion on issues of current interest affecting Asia and the world.