Panel: The Politics of Hope and Globalisation | Asia Society Skip to main content

Panel: The Politics of Hope and Globalisation 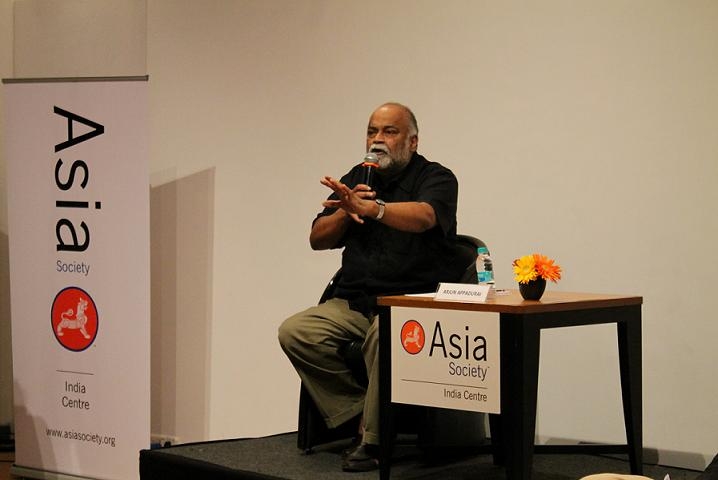 MUMBAI, July 25, 2013 — In a world where more than half of our population dwells in cities, the ramifications of globalisation on the various segments of societies inhabiting the urban sprawl is an issue of great concern. As we continue to scale new heights of growth and progress, one must take a step back to question the equity and justice in this development process.

To delve deeper into the issue, Asia Society presented a panel discussion on "Globalisation and the Politics of Hope." The main speaker for the event was socio-cultural anthropologist Arjun Appadurai, who is currently a Goddard Professor at New York University, and his recently published book The Future as Cultural Fact: Essays on the Global Condition was the focal point for the conversation. The other panelists were Ajit Balakrishnan, Founder, Chief Executive Officer and Chairman of Rediff.com; Zarina Mehta, Managing Trustee of Swades Foundation; Mick Gordon, CEO of Ipsos India; Sheela Patel, Founder and Director of SPARC; Teesta Setalvad (via video), educator, journalist and human rights activist; and Shaina Anand, filmmaker and artist.

Appadurai claimed that culture is commonly understood as a reflection of different sets of memories, heritage, traditions and habits, and is often described as a notion of the past. Hence, the future is largely handed over to economics and related fields. Appadurai, however, claimed that the future is not a universal plane, but rather that it forms a continuum with the past. He linked his view of the future to what he termed as the "politics of hope," explaining that "the 'politics' is because within every society there are differences in how this broadly shared horizon of hope plays out, which fosters internal tensions." He tied this in with the idea of poverty, which he felt is intrinsically not a matter of resources, but the lack of a "capacity to desire" and hence an experiential lack to have a say in how this future horizon pans out. Having identified this issue as a cultural fact, Appadurai concluded that to tackle poverty is not to leave it in the hands of experts, but rather to engage those living in such conditions and build in them the capacity to negotiate and work towards the provision of mechanisms that allow them to share their views.

Balakshrinan noted how Appadurai and he viewed worldly phenomenon through markedly different gazes. Employing the example of Wall Street, Balakrishnan explained that, for a businessperson, Wall Street only represented an institution for buying and selling stocks and raising capital, while Appadurai was more concerned with its anthropological relevance. Appadurai saw Wall Street as having a subtler and more complex role, identifying the "all-pervasive culture of risk: creating it, solving it and benefitting from it."

Gordon described India as "delightfully complex," and shared that Indians have consistently ranked amongst the happiest people in the world since 2007. He explained this positivity through the youth of the country and the genuine improvement in quality of life across generations.

Mehta focused on poverty, elucidating how, like Appadurai, she defined poverty not in material terms, but as the condition where one doesn't have the freedom to choose their kind of life, and is thus stripped off their basic freewill. Patel said that poverty was a matter of not having the right to make a mistake, which she addressed through SPARC by creating collective risk management strategies and producing what Appadurai termed as "governmentality."

Setalvad felt that India's republicanism has often been contested in modern times, and so she questioned how open and equitable India's society really was. Rooting her argument in the context of Mumbai, Setalvad employed the example of only one caste being made to sweep the streets of the city. She lamented that most of the upper middle class do not acknowledge such issues, making outsiders see Mumbai as a city cruel to its minorities, especially in the religious sphere.

Anand presented a brief overview of her project Wharfage, which dealt with illegal trade between ports in Indian and African countries through mechanised sailing vessels. She noted that, ever since the global financial crisis, these vessels have been increasing in size and number in a direction "perpendicular to piracy and sanctions." She found that trying to categorise such trade links, where goods such as used cars and basic household items are shipped across the Indian Ocean, often factually misrepresent what the trade is all about, making it a tricky issue to analyse further.

Presented in partnership with