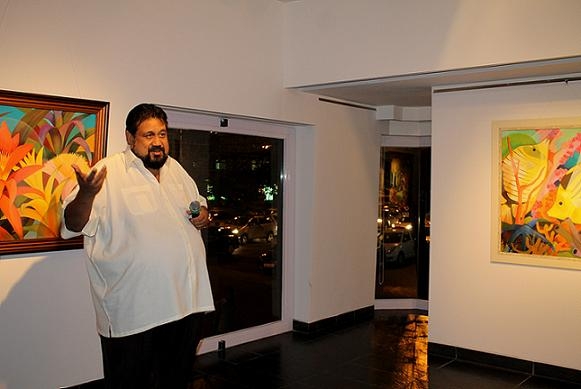 MUMBAI, October 22, 2013 — Asia Society India Centre presented artist Senaka Senanayake in a guided walk through his exhibit In an Iridescent Land at the Tao Art Gallery. The programme was a part of the Asia Society's AsiaLens series, which presents an array of perspectives on the visual and performing arts of modern Asia. Senanayake is a prominent Sri Lankan artist. He has exhibited his work for more than five decades, totalling over 100 exhibits that span 18 countries across five continents. His In an Iridescent Land exhibit focuses on natural depictions of the rainforest.

All gathered in the intimate setting of the Tao Art Gallery gained insight into the motivations and artistic methodology behind Senanayake's work. Senanayake began by outlining the trajectory of a lifetime's artistic development, beginning as a self-taught child artist in Sri Lanka before winning a scholarship to Yale University, where he received his formal training and global perspective. Senanayake noted the diversity of his life's work, spanning an evolving range of interests, topics, and artistic styles.

For the past decade, Senanayake has concentrated his art as a medium for environmental advocacy: depicting beautiful and positives scenes from the rainforest to promote public awareness of environmental degradation in his native Sri Lanka and around the world. Senanayake's work and commentary exhibited a fervent passion for nature's beauty and a great knowledge of the flora and fauna of the rainforest. Looking forward, Senanayake stated his intention to focus future works on the underwater environment of the Earth's oceans.