Not The End Of The Book: Reviving Indian Literature | Asia Society Skip to main content

Not The End Of The Book: Reviving Indian Literature 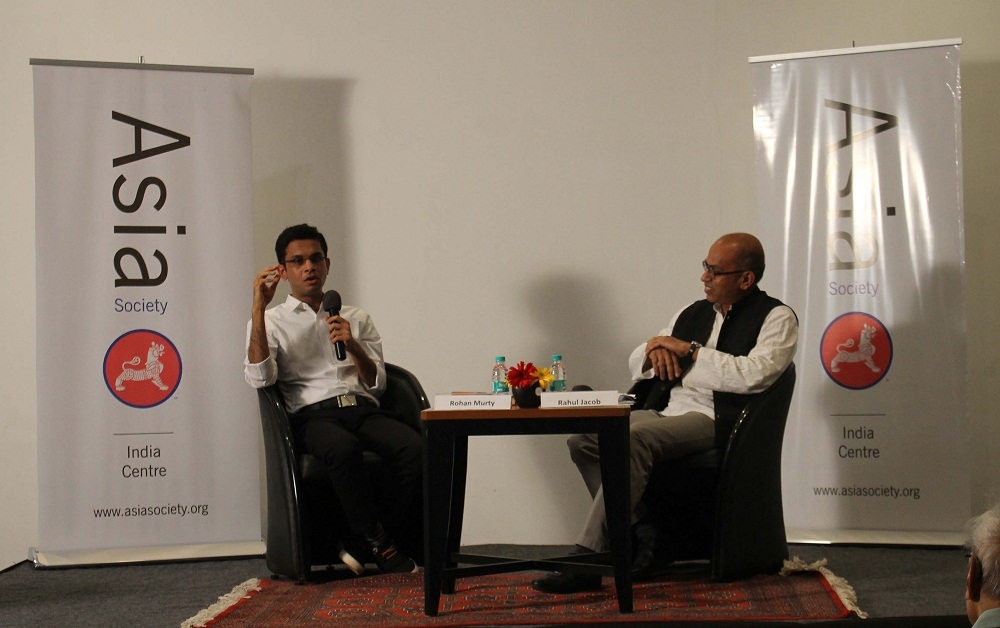 MUMBAI, 27 March, 2015 – What work is being done to save our vanishing literary heritage? That was the topic of conversation at Asia Society India Centre last Friday evening as we welcomed Rohan Murty, Founder of the Murty Classical Library of India and Rahul Jacob, Managing Editor of the Business Standard. The Murty Classical Library of India aims to reintroduce the greatest literary works of India from the past two millennia to a new generation of readers. The series provides modern English translations of classical works alongside the original Indic script.

The evening began with a short reading by Murty from the Therigatha: Poems of the First Buddhist Women. The works are some of the oldest poetry written by women that we still have access to, and what is astonishing is that the translations are so fluid. “Written 2000 years ago in the Pali language, the Therigatha feels like it was written only yesterday”, Jacob comments.

A computer scientist by training, Murty explained that his passion for philosophy and ancient India led him to make a natural leap into the classics. Murty began studying ancient Indian math; and was stunned to learn that you could arrive at the Fibonacci sequence through poetry – knowledge which he believes mankind cannot afford to lose.

In his quest to learn more about ancient India, Murty found himself unable to access vast pools of literature because of language barriers. Through conversations with Sheldon Pollock, Professor of Sanskrit and South Asian Studies at Columbia University and General Editor of the Library, Murty was introduced to the Loeb Classical Library, which provides translations of Greek and Latin literature. Based on these conversations they conceptualized the idea to found the Murty Classical Library of India. Initially meant to translate Sanskrit texts, they decided to undertake translations for all 14 classical languages in India in order to provide more depth and diversity.

Murty’s hope is to add five new books to the series every year for the next hundred years at least. The challenge he says, is the lack of access to extraordinary scholarly talent. There is a need for experts who are fluent both in the ancient language and in modern English – not either/or. In order to accomplish this, Murty explained that they reach out to the best scholars in the world, both Indian and non-Indian, so that the library may become the gold standard for Indian classical translations.

The evening concluded on a much more sobering note. The decline in scholars willing and able to learn classical languages is “not only burning down, it’s already at the ashes”. The few that remain in circulation, Murty argues, are not enough to sustain the magnitude of loss. This loss to the treasure of ancient Indian literature may be inevitable, but that doesn’t keep Murty from believing that it is worthwhile to preserve a small part of our heritage.