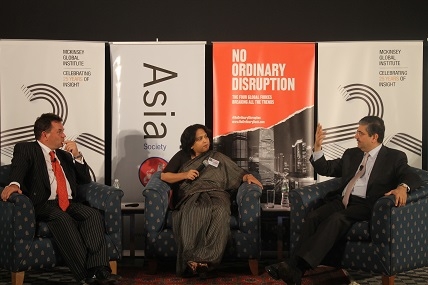 The evening started with opening comments by Noshir Kaka, Managing Director of McKinsey's India office, and was followed by remarks by Richard Dobbs. Dobbs began his remarks with renowned quotes from the past and explained how those intuitions were reversed in the future. Dobbs sees that the world as increasingly connected which makes it more complex and dissimilar from previous institutions. Dobbs compares the GDP per capita growth and population growth and reveals his findings that corporate capital grows predominantly faster (around fivefold growth) than GDP growth. This is referred to as a “golden period” of the Business Era. At the end of the golden period he foresees a disruptive world and he introduces us to the four disruptive forces that will change the picture completely. The Dobbs paradigm of disruptive world will be the result of industrialization and urbanization in an emerging economy, disruptive technology, an aging world, and global networks which he describes as four disruptive forces.

The panel discussion begun with Uday Kotak’s intuition about Richard Dobb’s book. Based on his own research Kotak found there will be a drastic change in job rankings and perception about jobs which are considered to be “safe.” Kotak expressed his optimism by saying that there is “no fun in static world”. Following the discussion he raised concerns about privacy, trust and security in the emergence of disruptive technology. On the question of social inequality Dobbs said, “disruptive technologies will bring inequality within a country, but overall at global perspective it reduces inequality.” Dobbs views attracted applause and his presentation engrossed the eyes of young and watchful business audience.