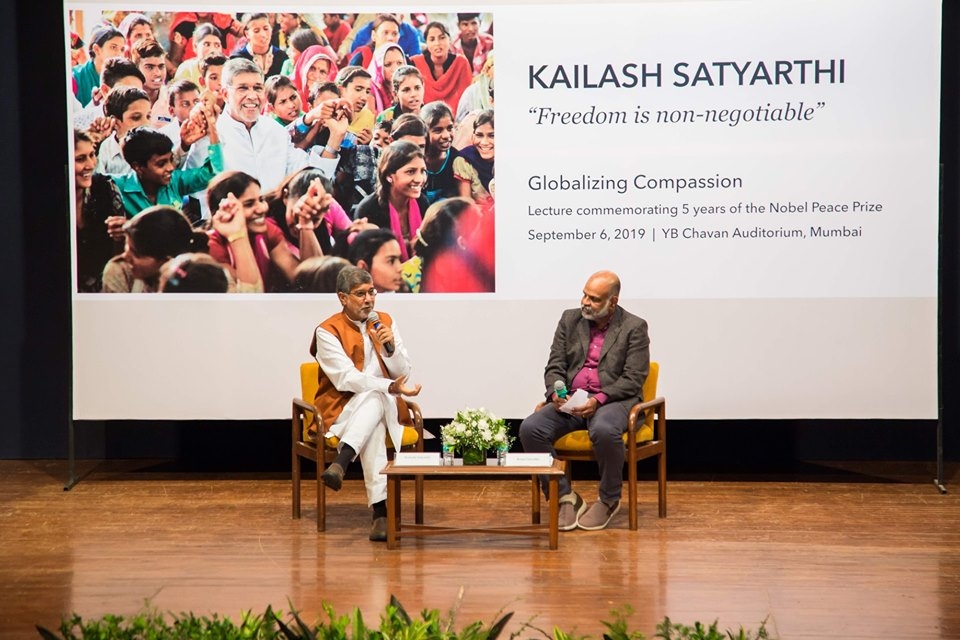 Mr. Satyarthi began his lecture by speaking at length about the values of compassion and kindness, and the need to promote their globalization along with the progress made in science and technology. He spoke about following the ideals of Mahatma Gandhi, and being inspired by the principles of non-violence, peace and truth. While sharing his childhood experience, Mr. Satyarthi talked about how coming across children engaged in manual labour as a young student shaped his worldview and inspired him to work tirelessly for the emancipation of child labourers. After completing his studies in engineering and working as a professor for a few years, Mr. Satyarthi later went to write widely about the evils of child labour in multiple newspapers before beginning his work as an on-ground activist in the field. While speaking about the modules of exploitation and systemic root causes of child labour, he said that eliminating the social evil of child labour will not be feasible unless deficits in society, culture and policy are addressed first. He ended his lecture by stressing on the universal value of compassion and emphasizing that even ordinary people can change the world by taking small yet measured actions in their day-to-day lives.

During the discussion, Mr. Carvalho asked Mr. Satyarthi about how the Nobel Prize had changed his life and the hardships he had to face before gaining global attention. While expressing his gratitude to the Nobel committee and international leaders like former US President Barack Obama and former UN Secretary-General Ban Ki-Moon who later met him to discuss his work, Mr. Satyarthi said that he was thankful for the award as it brought attention to the most ignored individual in society – the enslaved child. The media attention and interviews helped him to take his crusade forward to abolish child labour and spread awareness about fair trade practices which ensure children are not employed in manufacturing industries and exploited to produce goods. Mr. Satyarthi also commented on the work done by ‘Goodweave’ (formerly known as Rugmark), his initiative which provided certificates to companies which ensured child labour was not a part of their manufacturing practices. Calling it the first ever social labelling project which ensured thorough monitoring of production and supply chain practices, he said that the initiative was very well received by consumers and has been successful in creating jobs for adults, promoting fair trade practices, and encouraging social innovation and entrepreneurship in India.

The discussion was followed by an engaging Q&A session with the audience where Mr. Satyarthi shared his thoughts on fair trade practices, the Indian education system and the role of civil society members in the movement against child labour.