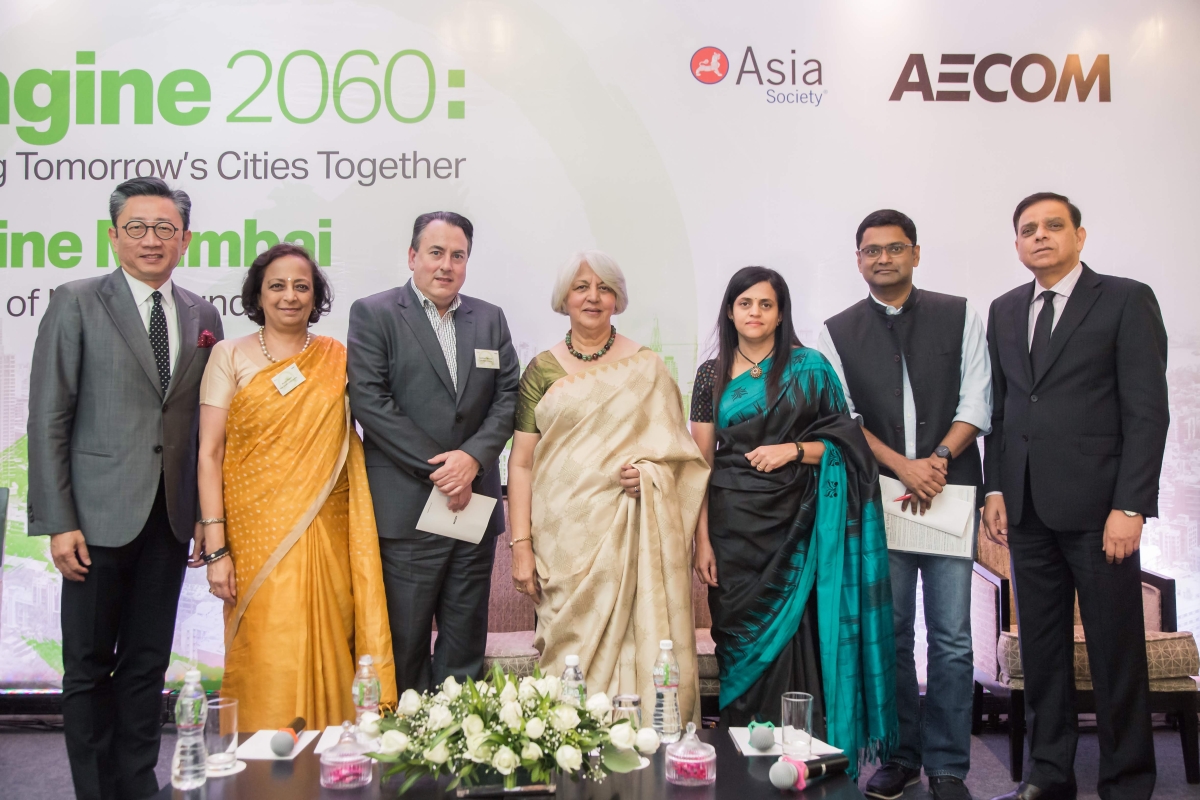 MUMBAI, 29th March 2019 – Asia Society India Centre and AECOM hosted Imagine Mumbai, the opening symposium of the third edition of Imagine 2060: Delivering Tomorrow’s Cities Together, a global conversation series, with the focus of the 2019 series on land in their new theme In Search of New Ground. The keynote address was delivered by Niranjan Hiranandani, Co-founder and MD, Hiranandani Group. The panel included Ashwini Bhide, Managing Director, MMRCL, Isher Ahluwalia, Chairperson, Board of Governors, ICRIER, and Gordon Falconer, Global Director for Smart Cities, Schneider Electric, and was moderated by Reuben Abraham, CEO and Senior Fellow at IDFC Institute.

Ms. Bunty Chand, CEO, Asia Society India Centre opened the conference by highlighting the pressures on land management in Mumbai and the need to take a multi-disciplinary approach by considering the interests of the diverse stakeholders.

Mr. Sean Chiao, President Asia Pacific, AECOM then spoke about the Imagine 2060 series as a platform for citizens and leaders to collaborate on bold ideas that will influence the future. He brought up questions on the capacity of Mumbai to accommodate the rapid influx of people, and whether urban development can enhance the quality of life and defend the city from natural threats, manmade disasters, and climate change.

Mr. Hiranandani commenced his keynote address by giving a historical perspective on housing in Mumbai since 1947, and the growth of regulated and unregulated slums in the city. He underlined the targets of the ambitious ‘Housing for All’ project of the Government of India to meet the deficit of 10 million houses in cities. He described infrastructure, transport and reclaimed land as three major paradigms that have immense potential for change in the future. He expressed his belief in the recent policy changes that would boost private sector participation in slum redevelopment. He also touched upon the issues like sustainable use of scarce resources like water that would have an increasingly important role to play looking forward. He concluded by expressing hope for an improved quality of life for the people by resolving the many challenges faced by Mumbai.

A stimulating panel discussion followed which brought into perspective some of the longest standing concerns of urban areas, including the lack of a comprehensive policy for land management in urban India. With questions on an ideal transport policy, the shift from a static paradigm of planning to a dynamic one, and on the essential components of smart cities, Mr. Abraham drew opinions encapsulating a range of challenges and solutions, not just for Mumbai but urban India as a whole. Ms. Bhide remarked that land use in Mumbai is defined keeping the spotlight on the 150-year-old suburban train network and the inability of authorities to track the changes in the needs of the people. Ms. Ahluwalia quoted a definition of ‘smart cities’ that neatly summed up the expectations from an aware citizenry and a responsive administration in making a city progressive and inclusive. Mr. Falconer expressed his views on technology as an enabler to plan and grow, and the idea of smart cities as a narrative to help develop an approach of programme, policy, and project.

The evening closed after an engaging session of audience Q&A’s and an informal networking session.