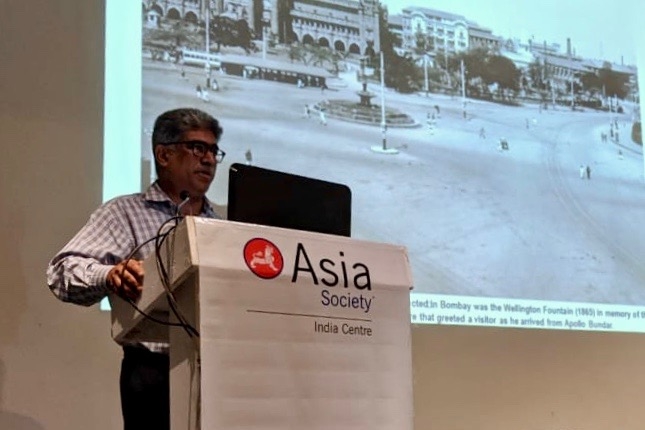 Dilawari’s presentation focused on three recent restoration projects in the Fort area of Mumbai – the Wellington Fountain, the Ruttonsee Mulji Jetha Fountain, and the Flora Fountain. He began his presentation with a short history of Wellington Fountain, a Neo-Classical structure built in 1865, and went on to describe the state of the structure before undergoing restoration. The cast-iron fountain and its basalt steps had been hidden under layers of paint, which Dilawari called “beautification dressed up in the guise of conservation”. The restoration process took 6 months beginning in October 2016. Since its re-opening, it has been one of the city's few functional fountains.

Dilawari then spoke about the Ruttonsee Mulji Jetha Fountain, an Indo-Saracenic monument designed by architect FW Stevens and the long-time Principal of the JJ School of Art, John Griffiths. He shared images and described the fountain and its surrounding area prior to restoration. The ground level had been landscaped and enclosed by stainless-steel fencing, neither of which complimented the fountains original aesthetic. The fountain's unique animal head spouts had been vandalised and vegetation had clogged the existing pipe system. The restoration team addressed these issues over a 5-month-long effort, successfully replacing the fountain’s water system, which now runs for six hours every day. Dilawari added that remarkably, two years since its restoration, the fountain has been adopted by local businesses in the Kala Ghoda area, who take care of its maintenance.

The last fountain discussed was Flora Fountain, a Neo-Classical South Mumbai landmark. Dilawari drew parallels between a series of images of the fountain from the 1880s to the 2000s, showing the changes made both to the fountain, and the surrounding area since its inauguration. The two-year-long restoration project involved fixing the existing pump, creating a marble trough, cleaning the fountain, and mending its statues. Dilawari explained that the painstaking process to clean the statue of Flora took six months to complete. The first phase of the restoration process was completed in January 2019, and the second phase, which focuses on the surroundings, is still underway.

Dilawari ended his presentation by stressing the need for periodic professional maintenance of these monuments after the restoration work has been completed. The presentation was followed by an engaging Q&A session with the audience.